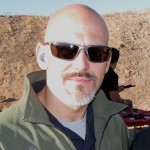 Rob Pincus is a former law enforcement officer, SWAT member, and world-renowned firearms and personal defense trainer.  Below was his response to what he sees as a threat to open carry and gun rights, in general.  I agree with his viewpoint.

He asked Grant Cunningham to post this on his blog, and Mr. Cunningham gave me the go-ahead to reprint here.  I think it relevant,  in light of the obnoxious behavior by the wanna-be activists against Oregon cops that went viral last week…

Guns should be carried for personal defense, not Activism. The best way to do that 99% of the time is Concealed Carry.

Even if people do choose to Open Carry, they shouldn’t do it to provoke confrontation nor be uncooperative with the police while doing it. It makes gun owners look bad, turns cops against us, wastes their valuable time and certainly isn’t going to make it more likely that people will think “oh, gun owners are normal people, not trouble makers.”

Spread the Word. Most people have realized that the time for “solidarity” through tolerance of the guys carrying guns with video cameras has come and gone. Their bravado is jeopardizing our RKBA and should be seen as an embarrassment to responsible gun owners. When the OC Movement started, people carrying while going about their daily business to show responsibly armed people are part of everyday life, it made some sense… but, the extremists have spun out of control. Let’s make sure that the firearms community is condemning this behavior.

I am not calling for a change in laws or for us to ostracize people who carry openly in a responsible, civil manner. Perhaps responsible OCers should be most concerned and the most openly critical of those who are using their guns to get (inevitably negative) attention?

Obviously, I am a proponent of the Right to Keep and Bear Arms and do not want to to see OC made illegal, but I fear that will happen more and more often, in more and more places (as it already has it one state), if the confrontational actions of a very few reckless people continue.