BlueSheepdog Richard and I went to the range a couple of months ago to get some trigger time with a mixed bag of pistols and revolvers.  One of the wheelguns he brought was the unique Charter Arms Pitbull.  The Pitbull is a .40 S&W cal. revolver, which was formerly called the CARR, for Charter Arms Rimless Revolver.

The Pitbull was made to fire a rimless auto-pistol cartridge without the use of full or half moon clips.  Integral to their design is a dual coil spring loaded extractor, which engages the case rim and ejects the spent rounds.

Originally, Charter Arms’ idea was to provide a revolver that was chambered in rimless auto-pistol cartridges that are popular with law enforcement, such as 9mm, .40 S&W, and .45 ACP.  Charter said the 9mm version, which would be the last evolution of the production line, would also load, fire, and extract .380 ACP (9mm short).

The CARR, later Pitbull, was envisioned as a handy back up for the police officer since his back-up revolver could be stoked with the same ammo that his or her duty gun would hold.  The size of the gun would be similar to their larger Bulldog .44 Special, sharing the same 416 stainless steel frame. 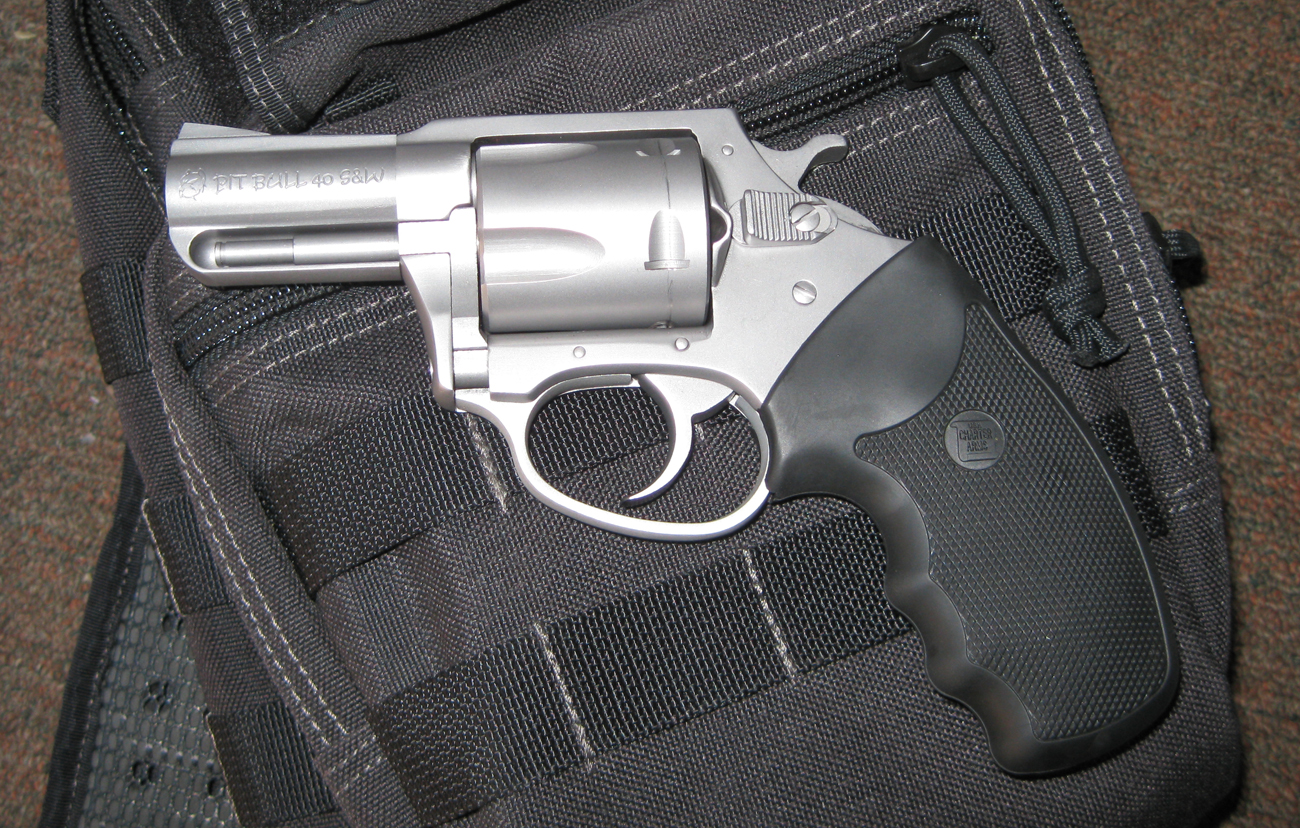 The five shot Pitbull comes standard with a 2.3″ barrel, matte finish, and rubber grips.  Generous grips fill the hand and dumb down the recoil.  Fixed sights top the barrel and frame.  The gun’s MSRP is $465.00.

I got to fire a few cylinders of .40 S&W 155 grain Speer Gold Dot hollowpoints through the Pitbull, so I’ll give you some preliminary impressions.  First off, the recoil of the .40 S&W was not harsh in this 20.5 oz. revolver.  The unloaded Pitbull’s weight is about equal to that of my Glock 27 with empty mag.  I do not find either gun difficult to shoot with duty ammo.

Inserting the bullets into the Pitbull was…odd.  At first, I thought the walls of the bores were gunked up because there was a strange grating feeling as the rounds are pushed into place.  We later figured it was the spring extractor exerting some side pressure on the casings.  This is what holds the bullets in the extractor, so that was apparently normal.

The .40 cal. rounds ejected the majority of the time.  On occasion, a round or two would hang up half way out of the chute and tangle in the star.  But mostly, a sharp rap on the ejector rod shot all five empties out just fine.

This was obviously an early production model sent to Richard by Charter Arms.  We had some trouble with the trigger binding in double action mode.  It happened to me once, and several times to Richard.  It is something I would have shipped the gun back to Charter for and I know Richard sent them some feedback.  Single action had no issues. 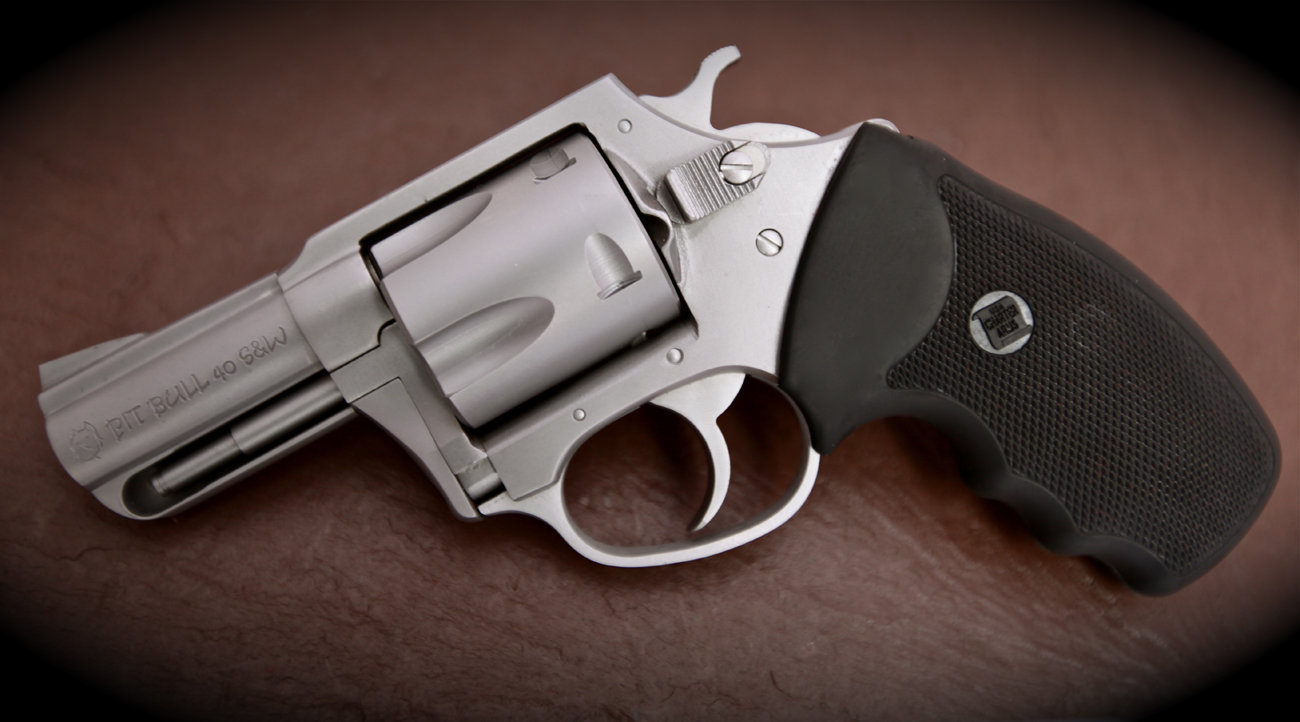 Charter Arms has their own proven internals that have been cranking and firing their revolvers for many years.  They are generally reliable for the mechanical entities they are.  I had a Charter Arms Undercover .38 Special back in the 1990’s.  It was a good gun and I had zero problems with it.

Opinions?  I have to be honest, while it seems like a fantastic idea, the size of the Pitbull is a bit large for an on duty back-up gun.  The higher pressures of the .40 S&W and .45 ACP necessitate the large stainless frame.  This gun in a 9mm chambering and of the same size as a J-frame Smith & Wesson or Ruger LCR would make the Pitbull more mission capable as a cop’s secondary weapon.

But then, that would make it standardized only for those officers carrying 9mm semi-autos, and right now .40 S&W is arguably the most popular law enforcement caliber (until the wind changes direction again).

You may not mind the frame size, as some officers will ankle carry quite a large secondary gun.  Or you may happen to carry .40 cal. on duty and want an off duty revolver to shoot the same.  In either instance, the Pitbull may be right for you.

The Charter Arms Pitbull is definitely a niche gun.  If it happens to fill your niche, then it is an option you might certainly weigh.  In any event, it was fun to shoot.

Update: Paul Carlson over at Safety Solutions Academy posed a question about moon clips.  In examining the Pitbull, it is apparent that because the rimless bullets sit flush in the cylinder, moon clips are not an option.  Nor does the design does allow for a viable moon clip modification, by my estimation.

The question of reloads came up on a forum.  I don’t believe current speedloaders will work with the extractor design of the Pitbull, however, .40 S&W bullets fit in Tuff QuickStrips and Bianchi Speed Strips for .38 Special/.357 Magnum.  Here is a pic: 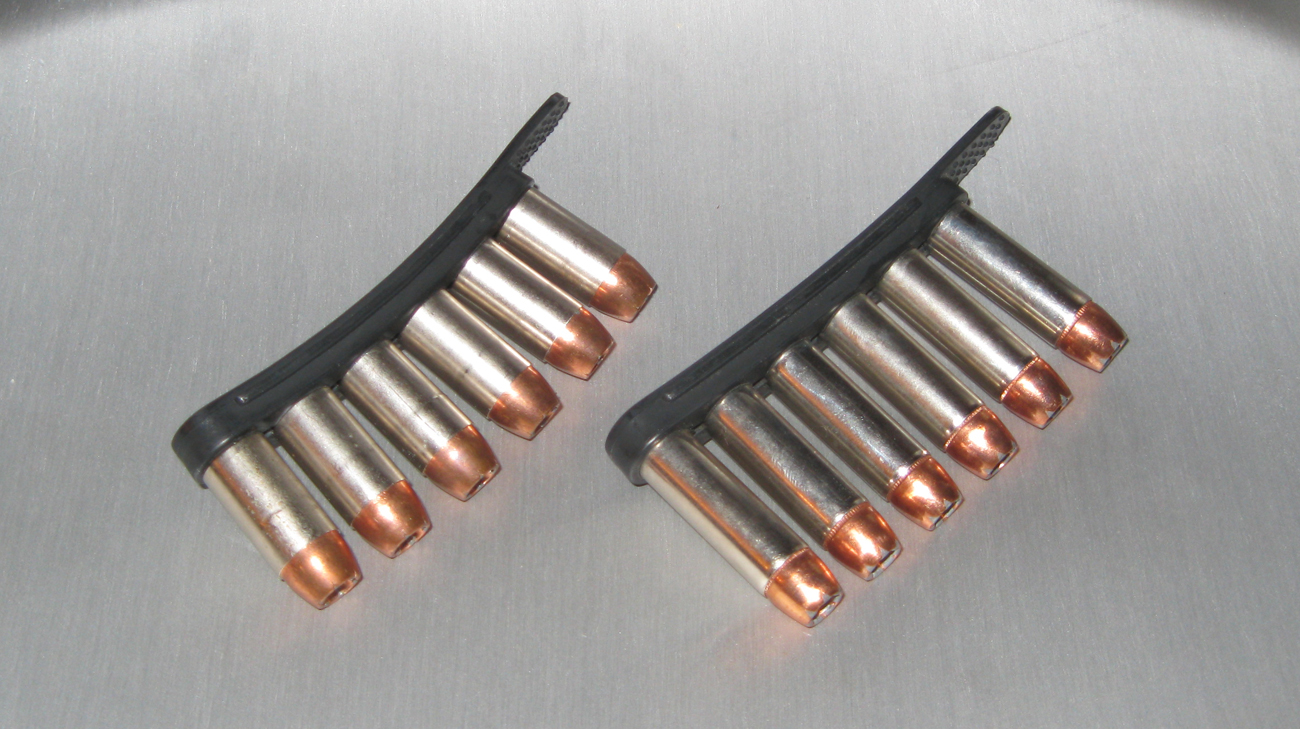