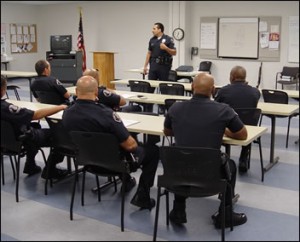 We went on quite a few hot calls in the last couple of shifts.  One in particular had some valuable lessons that deserved time in a debriefing.  A “Shots Fired” came in to our Dispatch Center.  Units were sent to the general area.  Nothing was found at first.

When one of the officers went to speak with a complainant, he heard gunfire from several houses to the west.  More officers arrived.  Just prior to my pulling on scene, the troops had focused in on a particular house on the block.  Officers were sent to surround it.  There was no valid phone number to the home.  We cautiously made contact with the homeowner and it was ascertained he was suicidal, homicidal, and in need of commitment and services.

After he was in custody, we found he had cranked off over twenty rounds in his backyard because he was depressed over his unraveling family situation.   He threatened us with future gun play and was taken to a mental health facility. Case closed?  Not quite.

At the next night’s Read Off, we debriefed the call in a constructive manner.  The squad did a lot of things right.  Decisive action.  Adequate manpower.  Good investigation.  Something we could have done better was communicate.  Officers at the front of the house did not know the rear cover was not entirely in place when contact with our threat was initiated.

One of the first requirements for critical incident management is containment.  Before you can address a situation, you must have control of it.  Our perimeter should have been better.  Clear communication would have solved that.

In addition, the first supervisor on scene was not privy to all the information known by the lead officer.  Because of this, subsequent officers arriving were not receiving the latest intel from that sergeant.  Again, communication can fix this.

It is common for SWAT to debrief their operations immediately after a deployment.  Patrol does not have the ability to just stop service delivery for this, but many agencies have a Read Off or Roll Call prior to each shift.  This is the perfect place to discuss a call and hone problem solving skills. I personally like to go over a street call the next day, anyway.  Some nit-picky details seem less relevant after a night’s (day’s) sleep.

The debrief should be a frank discussion analyzing the good and bad points in an incident, or critical portion of an incident.  It should not focus exclusively on the negative or devolve into a bitch session.  Just like training, the goal here is improve our response to a dangerous or complicated set of variables.

Debriefing an incident can reinforce effective tactics, identify potential areas for training or remediation, and strengthen teamwork, all of which increase everyone’s officer safety.

One Response to Debrief That Patrol Incident