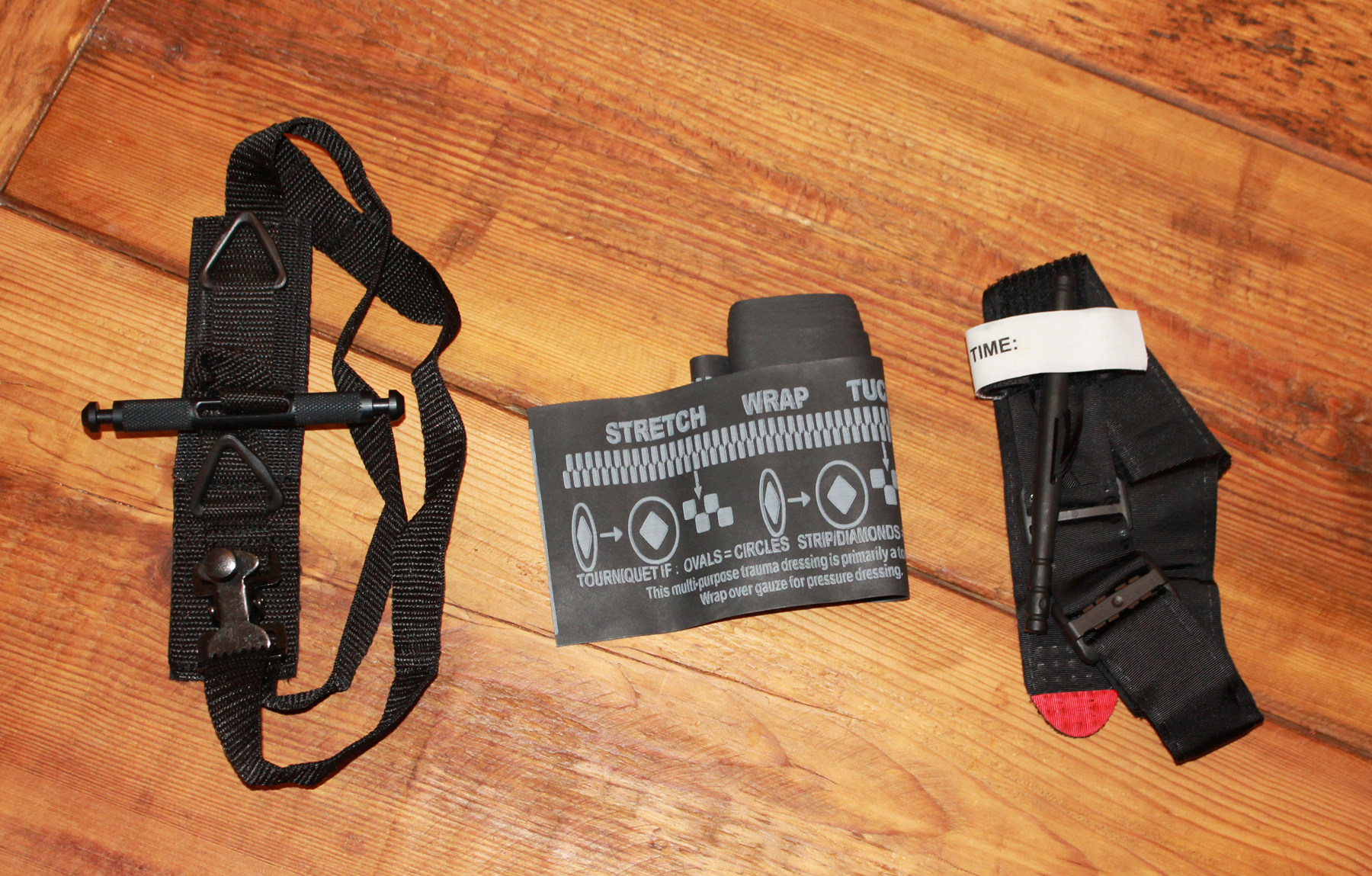 There was an officer-involved shooting in the City of St. Petersburg last week.  In the exchange of gunfire, an officer was hit in the leg by a bullet from the suspect’s pistol.  Unfortunately, the officer’s Combat Application Tourniquet (C-A-T®) was in his cruiser.  He attempted to fashion a field-expedient tourniquet from a garden hose to help staunch the flow of blood.  I am glad to report that he survived.  The suspect did not.

This shooting caused SPPD to examine their issuance of the C-A-T tourniquet.  Some officers complained that the C-A-T is difficult to carry on a crowded gun belt.  SPPD Chief Tony Holloway, in turn, approved the purchase of the SWAT-Tourniquet, or SWAT-T, which is essentially a flat elastic band that folds into a very small package.  In St. Pete’s case, the SWAT-T’s will supplement the C-A-T’s that the officers are issued.

Currently, I have a C-A-T, a SWAT-T, and a third type, the SOF® Tactical Tourniquet.  The SOF@TT is a windlass style of tourniquet, which is manually tightened with a rod, as is the C-A-T.  My C-A-T was department issued.  I bought both my SWAT-T and SOF®TT.  I have practiced with each one and I have a few thoughts.

My C-A-T is the one I carry on Patrol and, despite that fact that is issued, I would still wear it out of personal preference over the other two.  My experience is that the C-A-T is the easiest of the trio to apply to oneself.  Each tourniquet will absolutely do the job, but when you have only a minute or two to save yourself from exsanguination, the simplest one to get on is the best.

I always plan for the worst-case scenario.  If I had to apply a tourniquet with just one hand, I find the C-A-T can be pre-loaded to slide on an extremity and be tightened with either arm reliably.  The SOF®TT is similar to the C-A-T, but a bit more complicated with its clamping hardware.  The SWAT-T is, frankly, hard to get started on an arm or leg with its first wraps.

These are my opinions, so if you disagree and like one of the others then I think you should use what works for you.  In our yearly TCCC training, our instructor stressed to practice, practice, practice with your tourniquet to make sure you can effectively don it during stress.  He also urged us to take everything out of their sealed packages to know how they worked before they are needed.

As I have written before, when in the blue suit, I carry my C-A-T on my left ankle over my boot with a T.U.C.Rig hook and loop strap.  The tourniquet is accessible with either hand and comfortable to wear.  One our detectives carries hers in this manner in our business casual wear in CID.  I see some of our patrol officers with C-A-T belt holsters.  Still others affix them in the straps of their ballistic vests.

I am thrilled law enforcement is having this discussion about tourniquets.  Decades ago, an officer friend of mine was shot in the femoral artery and bled to death at the scene.  He might have been able to self-rescue and mitigate his extremity hemorrhage if he had a tourniquet.  I won’t put on the uniform without strapping mine on.  It could save me, another officer, or a citizen.  It is that important.

5 Responses to Tourniquets for Police Patrol