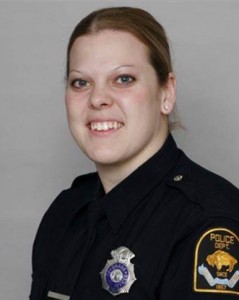 It was very, very sad to read that an Omaha, Neb. Police Department gang unit officer was shot to death today by a wanted fugitive.  Sadder still was that she was to start maternity leave tomorrow, as her daughter, born February 17, was due to come home from the N.I.C.U.  It is an unbelievably sorrowful situation.

Ofc. Kerrie Orozco, 29, had been with OPD for seven and a half years, three of which she was assigned to the gang unit.  The unit was serving an arrest warrant at about 1300 hrs. today when the armed suspect engaged the officers.  Both Ofc. Orozco and the suspect died from gunshot wounds.

Ofc. Orozco is survived by her husband, daughter, and two step-daughters.  OPD will announce funeral arrangements.  Prayers to Ofc. Orozco’s family and to OPD friends.

This tragic incident really captures modern day law enforcement’s sense of family and diversity as the personnel behind the badge have become more representative of all genders, races, and belief systems.  Is it any wonder we feel even more protective of each other as we try to survive our shifts?