As I wrote in Glock Misses Perfection…, I was glad we made it to the Austrian (and USA) gunmaker early at SHOT Show 2014’s Media Day at the Range.  There was so much controversy regarding the release of the Glock 42 in .380 ACP that I haaaad to shoot one.  ASAP.

I own several Glocks. A G23, sporting a 22 round stick magazine, Speer GDHP’s, and Streamlight TRL-1S, is my current nightstand pistol.  I carry a Gen 4 G27 daily in my role as a detective sergeant.  I am not necessarily a fanboy.  I own and enjoy a safe full of other maker’s handguns, but I admire the utility of Gaston Glock’s pistols.

I guess I was not concerned about the looks or reliability of the 2014 Glock 42.  These things are…positively predictable.  The size of the new gun caused me curiosity.  Yes, I had read the specifications released for the G42.  It measured as comparable to my Kahr PM9, but was about a half inch longer at the slide.  Knowing this did not satiate my interest.

We waited for our turn at Media Day to receive an appetizer–a fistful of single stack Glock magazines brimming with .380 cal. hardball.  Ahead of us, the two tables on the range with new G42’s and G41’s were occupied, but not for too long.  Fidgeting with our cameras, we would make it to the entree soon enough. 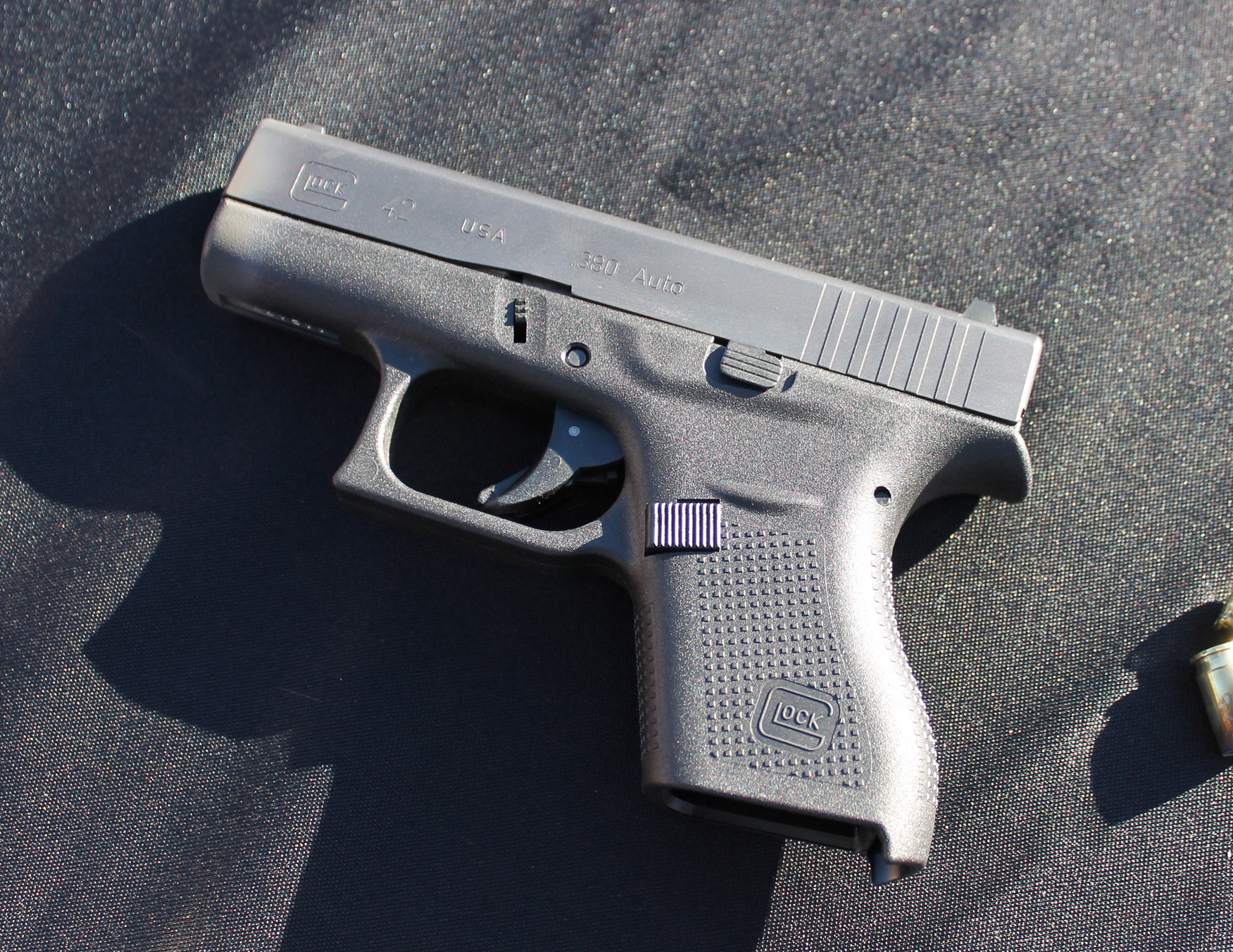 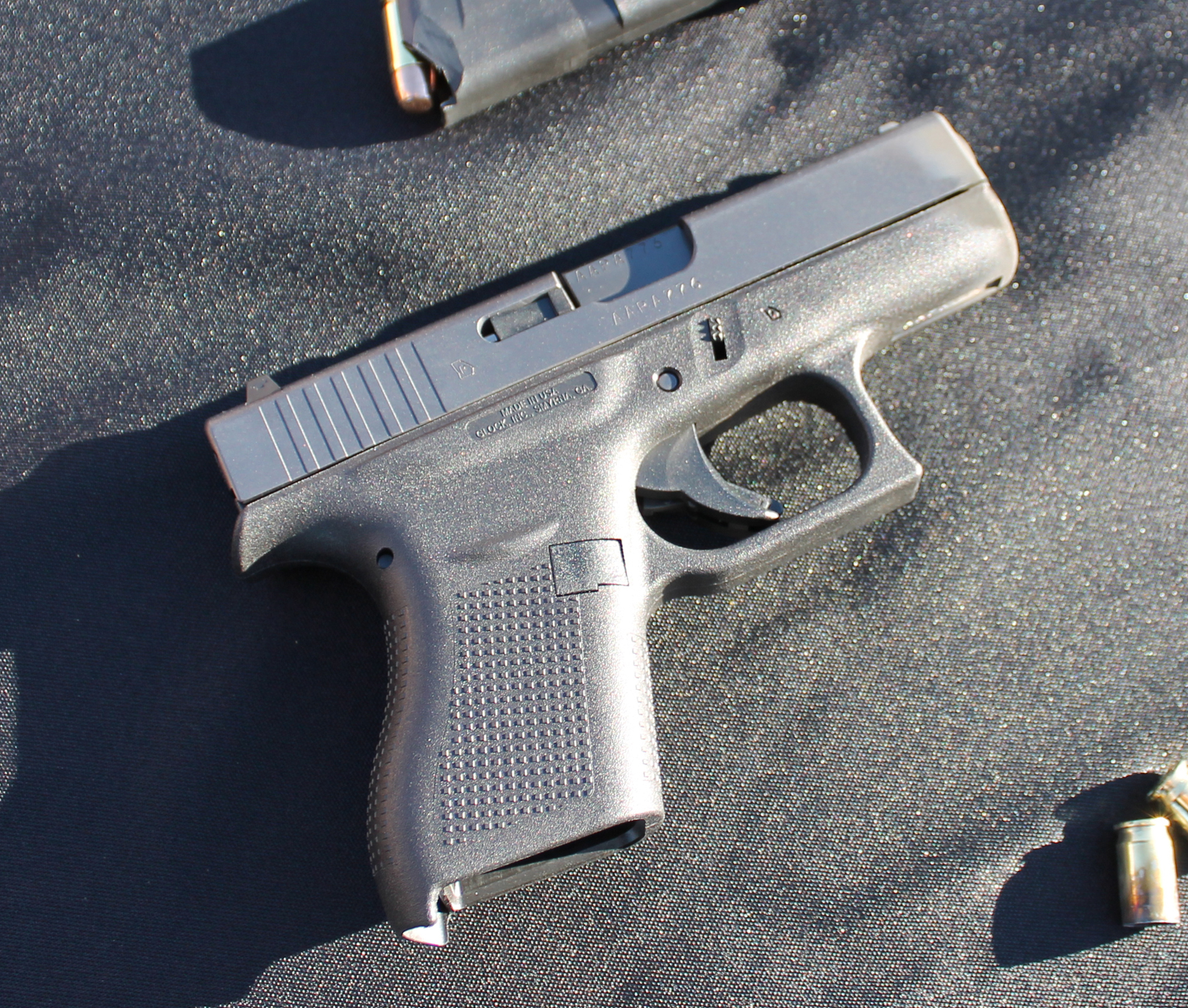 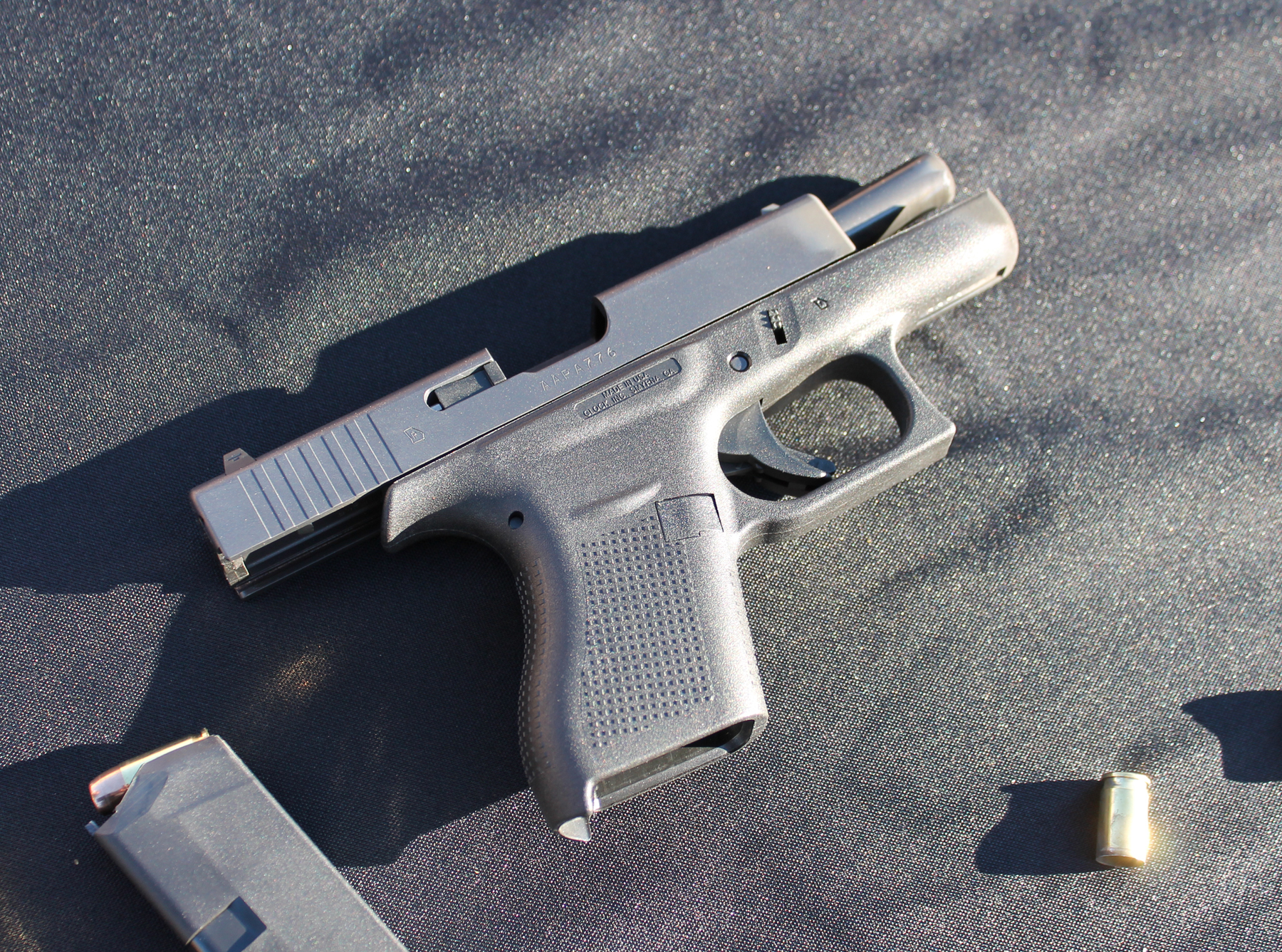 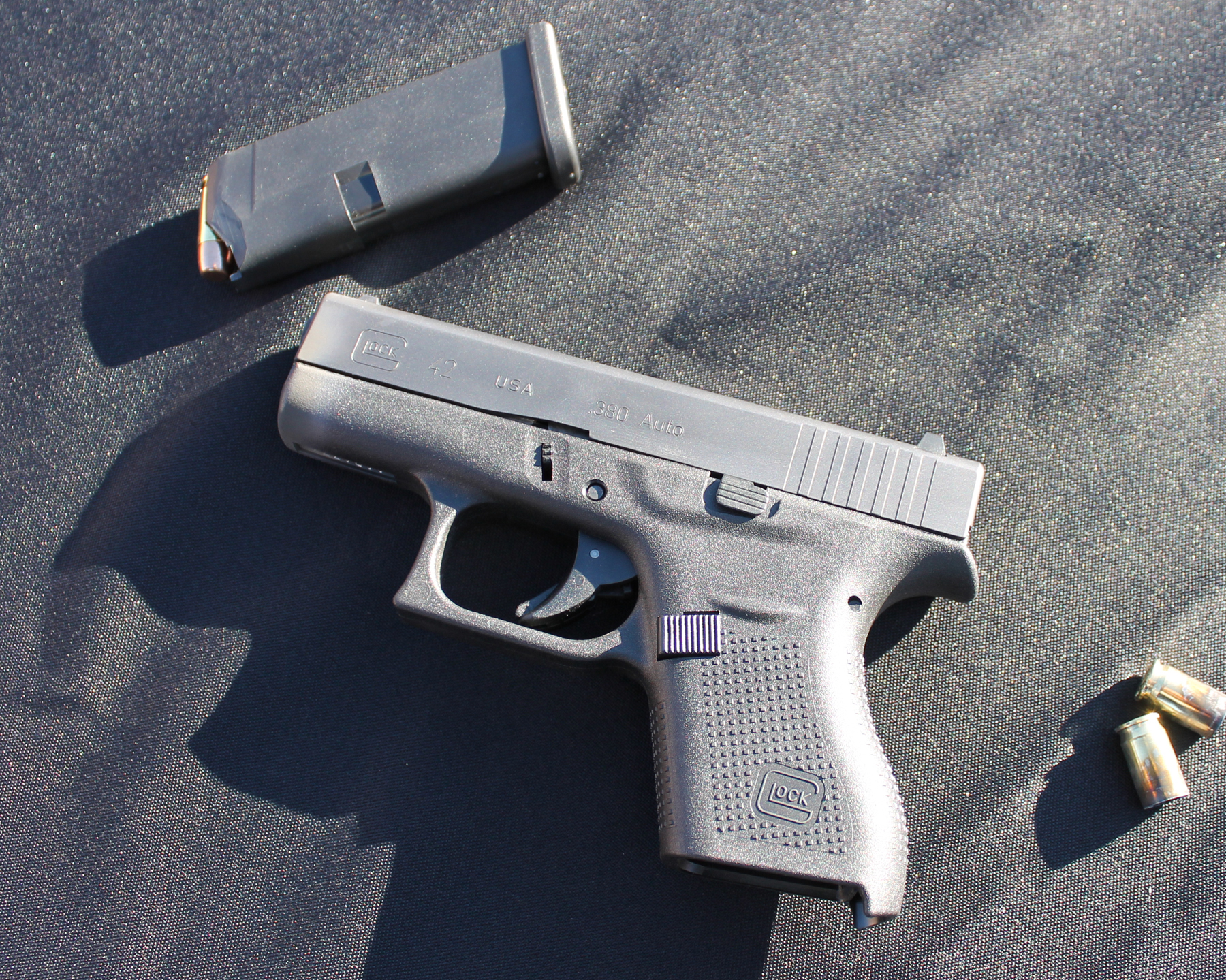 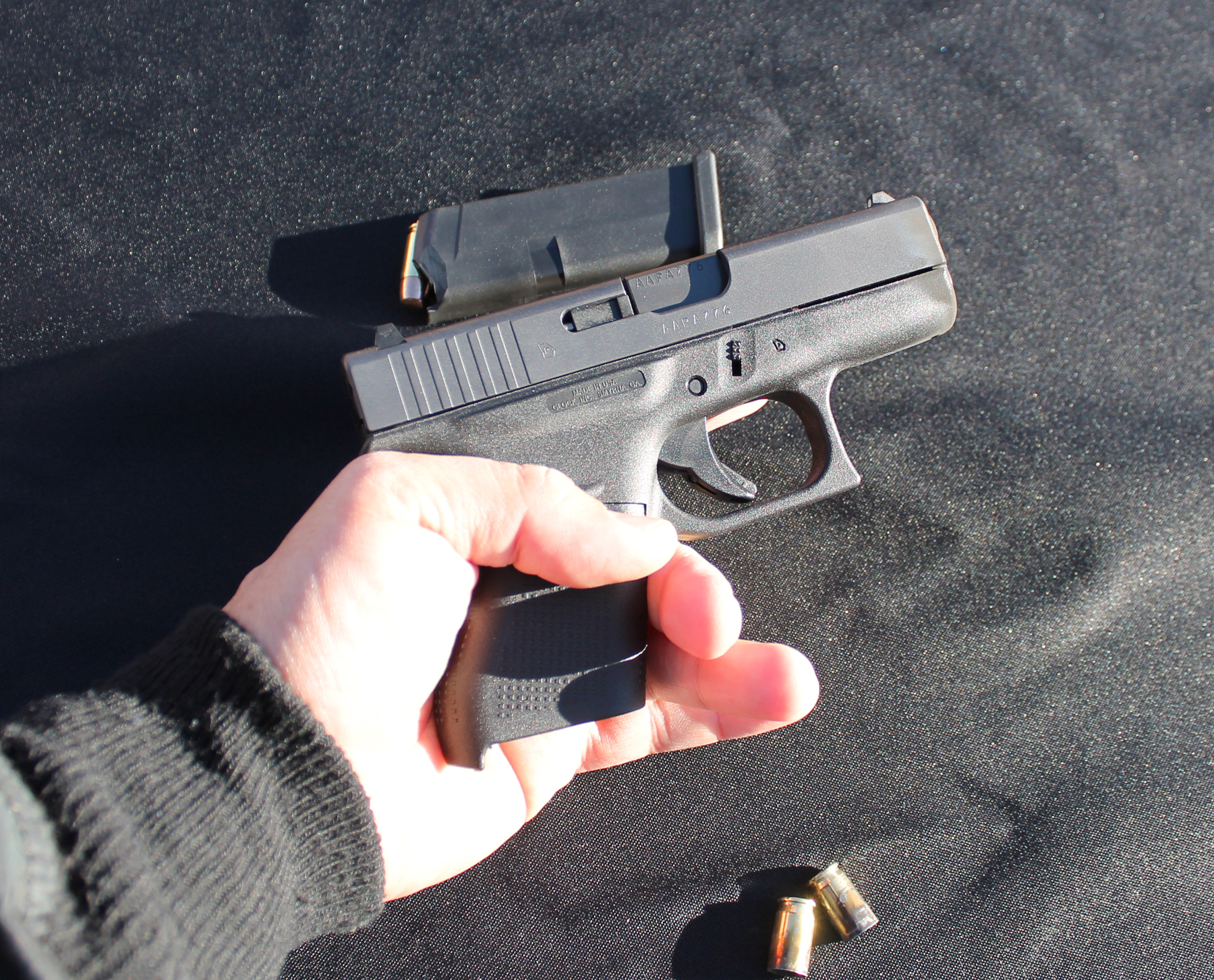 The journalists in front of us finally finished their examination and Richard, Aaron, and I were signaled “range left” to an open table.  It began with some still photos.  Click, click, click, click.  Flip it over, repeat.  A lack of finger grooves on the front strap and absent adjustable backstrap made the little Glock look like a Gen 1 or Gen 2 iteration.  The G42 was smaller than I had imagined.

With a long line of impatient media behind us, it was polite to speed things up.  I picked up the G42 and dry fired it.  I could just get my pinky on the base of the grip.  It felt natural in the hand.  I gave Richard my video camera so I could actually shoot the gun.  Loaded mag in, slide dropped, sights acquired.  Let the bangs begin!

The G42 had Glock’s signature trigger pull and short, clean reset.  It was easily controllable.  Well, that was expected.  Our allotment of ammo was expended quickly.  I turned to the Glock rep and thanked him.  I told him I had worried they would run out of .380 ammo before I could get to shoot it.  Deadpan, he said that was not a problem because the company had brought out 20,000 rounds.  I asked, “Two-Zero Thousand?”  He nodded.  Wow. 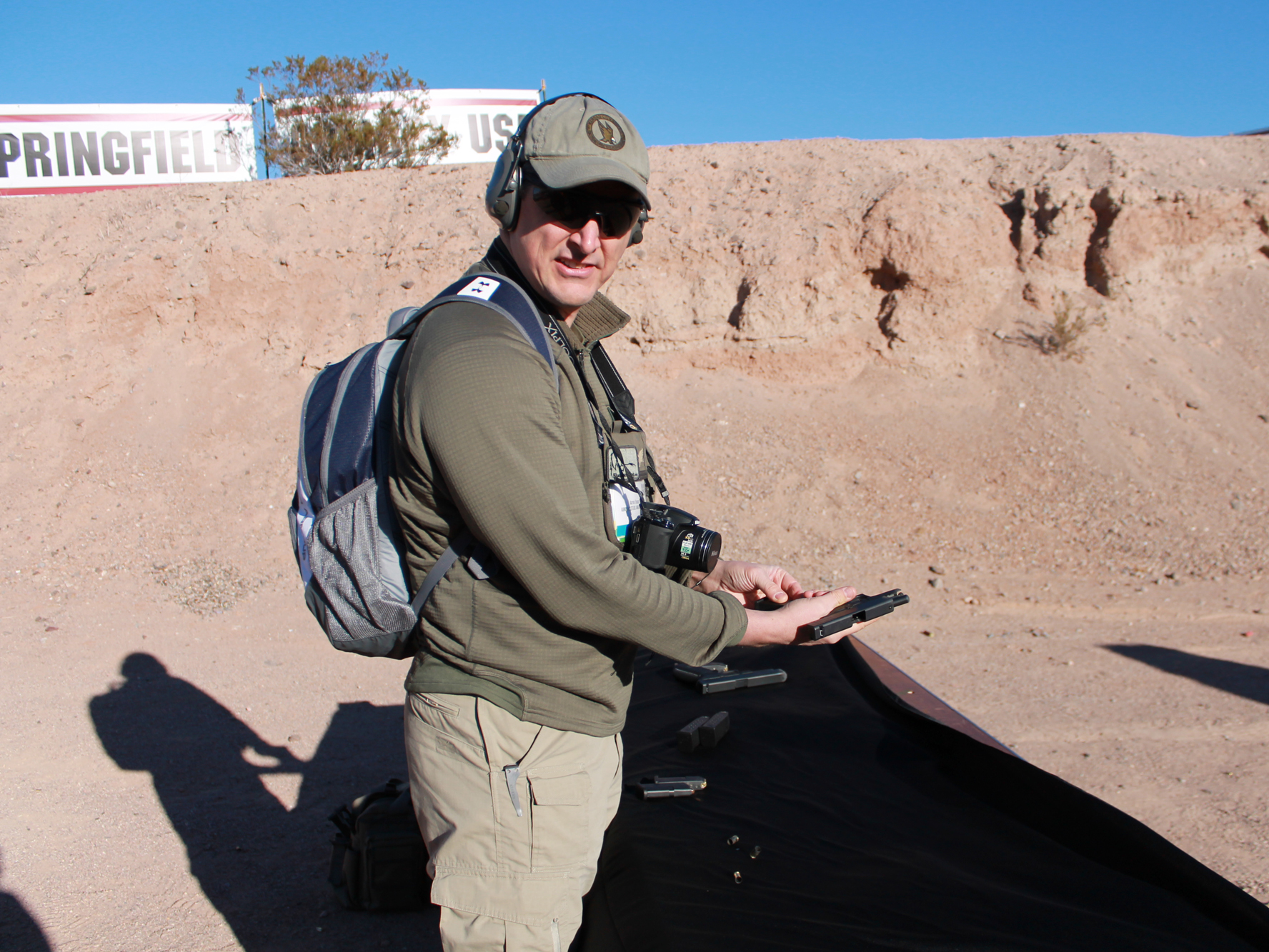 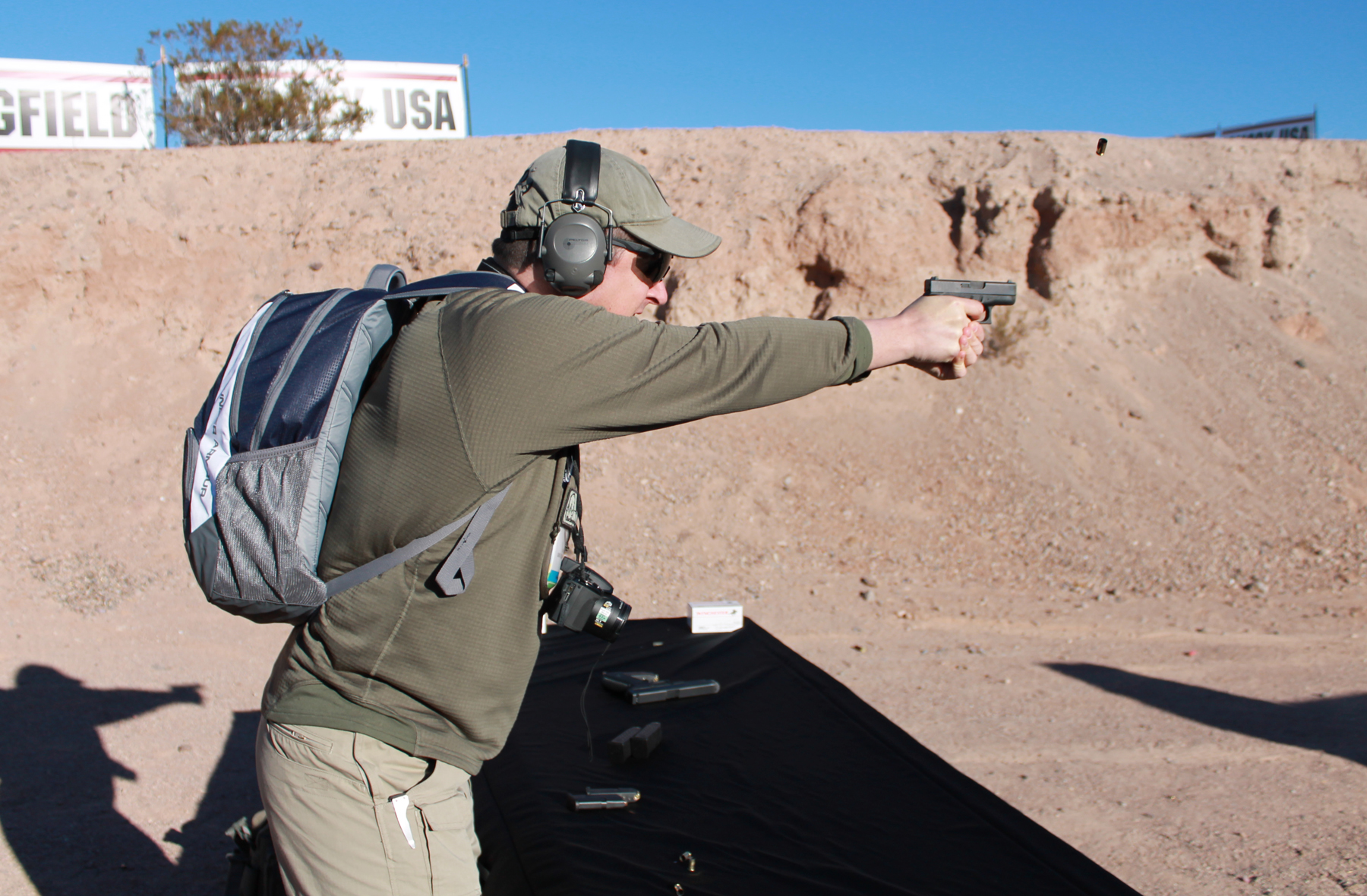 Our time was up and we had to shuffle along.  I don’t think any of us was disappointed.  Not surprised, but not disappointed.  I have minimal aversion to the .380 ACP as a carry round because it delivers similar energy as the .38 S & W Special in modern loads.  Today’s bullet technology also chalks up on the favorable side of the .380 ledger.

This gun is a possible buy for me.  If you don’t like Glock’s and/or calibers this small, you will have no use for the new Glock 42.  But as many, more savvy industry professionals have predicted,  Glock will sell a metric f@ck ton of these pistols.  Perhaps SHOT Show 2015 will unveil the 9mm version.