They Stole my Crown Vic! 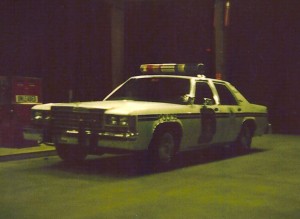 Okay, “they” meaning my Administration.  I went to work last night and saw a set of keys and fobs on my desk to a brand new Chevrolet Tahoe.  An email instructed me to vacate the CVPI posthaste.  She had been reassigned.

I had been given my first Crown Victoria in 1990, when I went off to K9 school.  The previous handler had taken great care of the 1988 model and had even installed a cassette player!  I was thrilled, since I had no real love for the anemic Dodge Diplomat that had been my daily cruiser.

I have spent many an hour in Crown Vics over the years and I always felt at home.  The large sedan, V8, rear wheel drive configuration was stable at reasonable speeds.  We pursued suspects regularly back in the day and I had my share of chases.  I remember the Oldtimers telling us to shut down the A/C for a few extra horsepower.  And roll up the windows.  To reduce drag?  No, so we can hear your radio transmissions, rookie!

Unfortunately, I crashed a couple of CV’s, but I always came out unscathed, so I guess I’m lucky and the cars are fairly sound.  One of our guys, nicknamed T-Bone for the type of crash, spent a few harrowing moments barrel rolling his cruiser after being struck while chasing a speeder.  He also lived to drive another day. 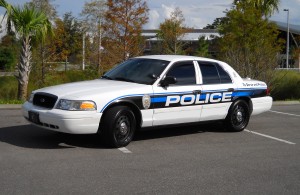 One year, at our annual pursuit training, I saw our former chief of police deftly maneuver the driving pad with one arm casually hanging out the open window of his unmarked Ford.  Mostly desk-bound, he looked smooth as he scorched the course and showed the younger officers what a seasoned badge could do.  Reminded me not to discount the graying fellas.

Yes, I enjoyed the shakedown cruise of my new Chebby.  It is gives a throaty roar when you gas it.  I was surprised how well mannered it is in a corner.  But it does not yet feel like what I think a squad should.

Sometimes I reminisce that I have seen the world through the windshield of a legendary police car…and it was good.

3 Responses to They Stole my Crown Vic!