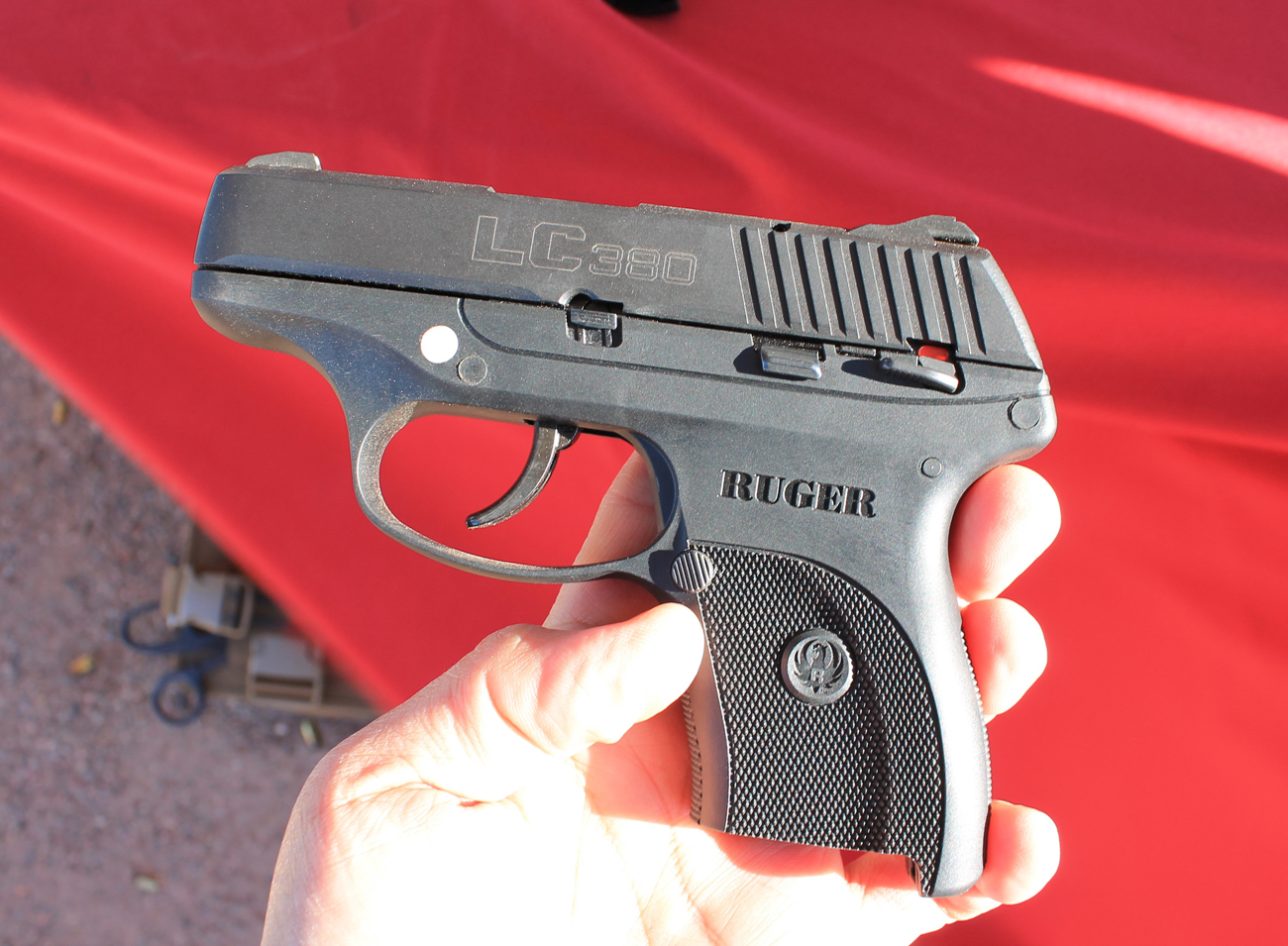 Sturm, Ruger & Co. trucked out their new LC380 to SHOT Show Media Day.  Since Ruger’s designated patch of real estate was at the very north end of the Boulder Rifle and Pistol Club, we did not get to them until late in the afternoon.  Some vendors were already packing up, what with the still chill temperatures and lashing wind.  Aaron and I were hanging tough.

When we stepped up to the table of guns, I bluntly asked the Ruger rep what they were thinking by making the LC380.  I had an answer in mind, but I wanted to see what he would articulate.  He told us that their thought process was to take the lesser kick of the .380 ACP cartridge and mate it to a larger framed weapon (their LC9) for recoil sensitive concealed carry customers.

Micro pistols such as the Kel-Tec P3AT, Smith & Wesson Bodyguard 380, Kahr CW380, and Ruger LCP can be difficult for some to shoot well because of the limited amount of polymer to grasp and short sight radius.  Ruger feels that there is a market for a slightly larger handgun in the .380 caliber. 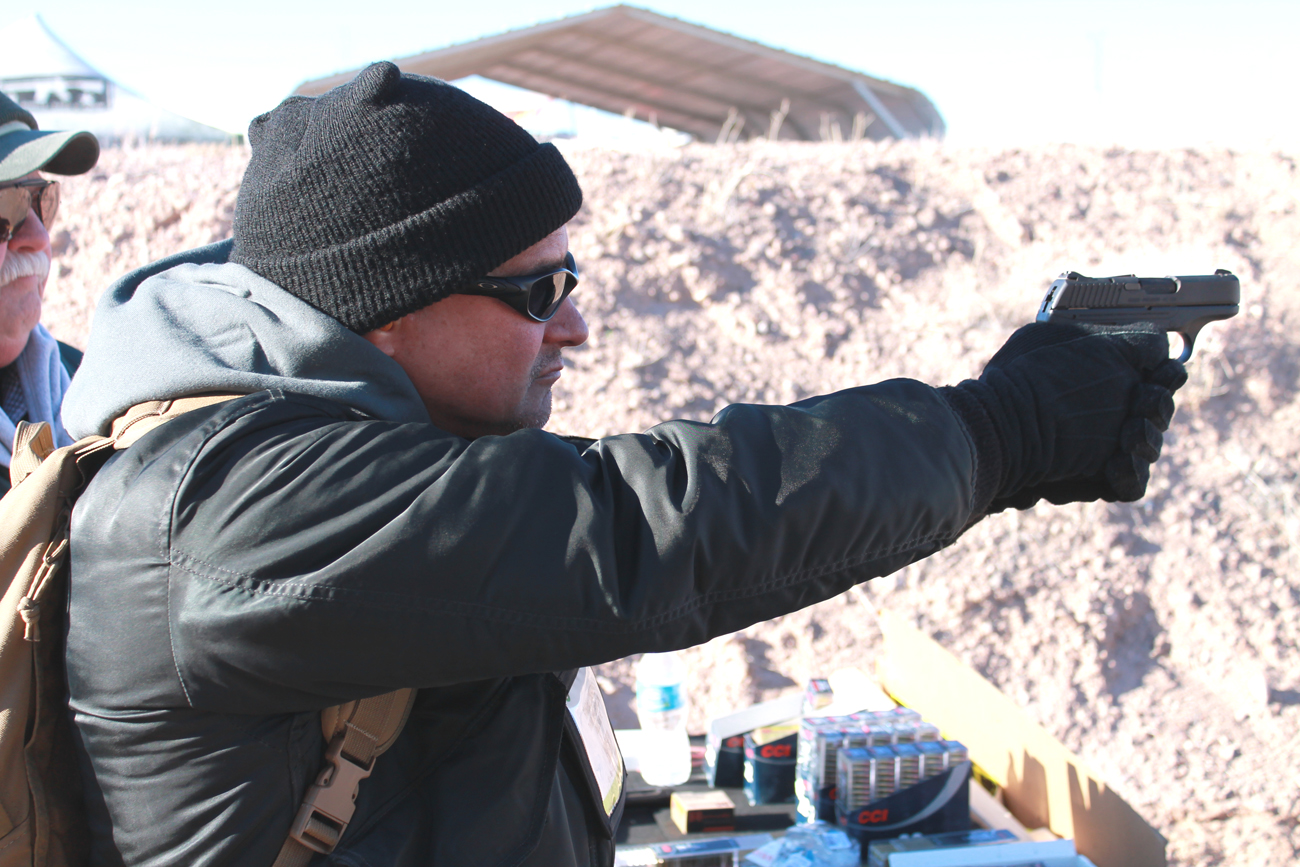 The LC380 is built on LC9 mechanicals.  The only thing I detected visually that was different between the two was a small metal spacer inside the back of the magazine that pushes a .380 cartridge forward at the primer to make up the 1.85mm deficit in case length from 9mm Kurz (.380) to 9mm Parabellum. 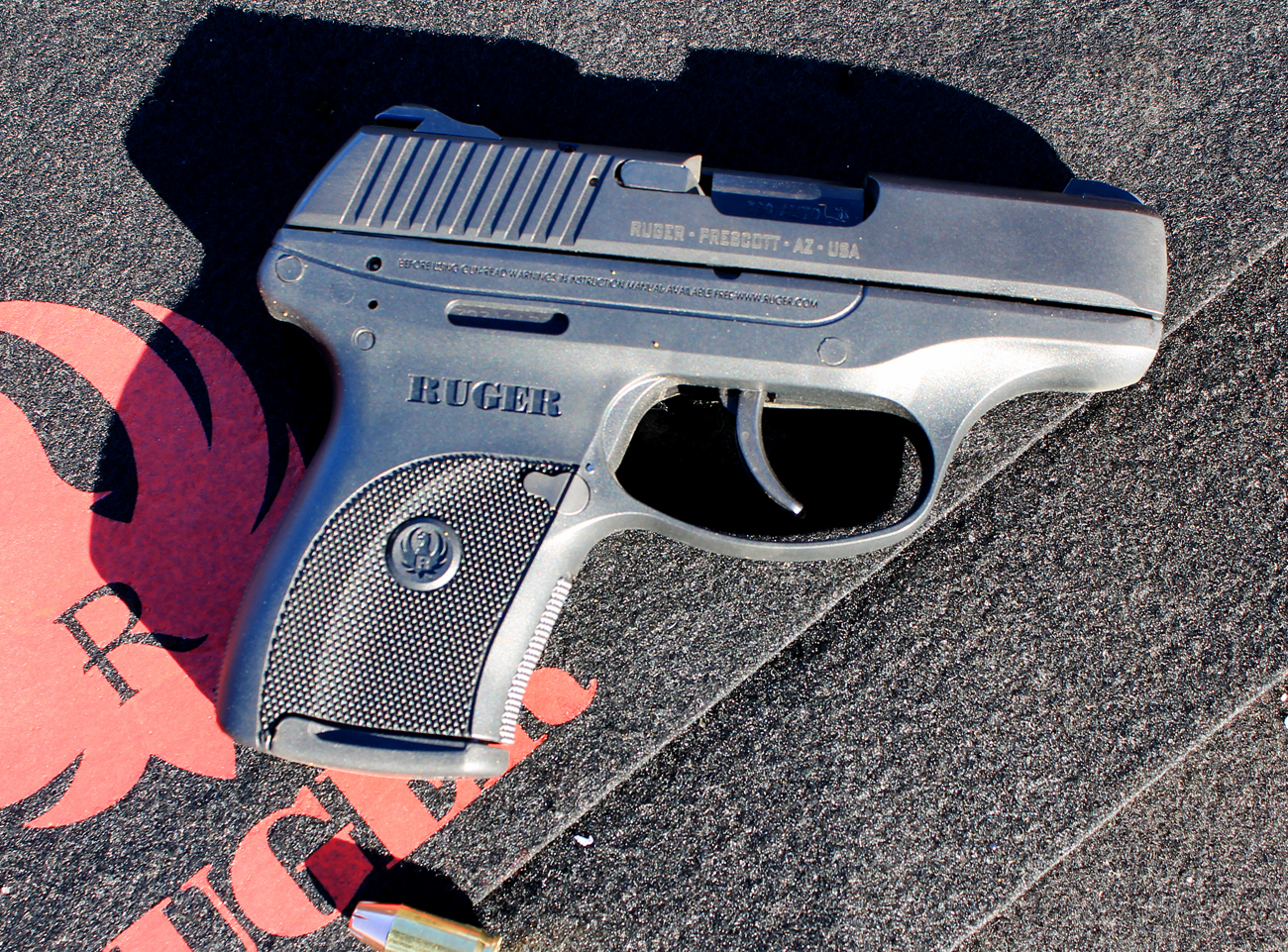 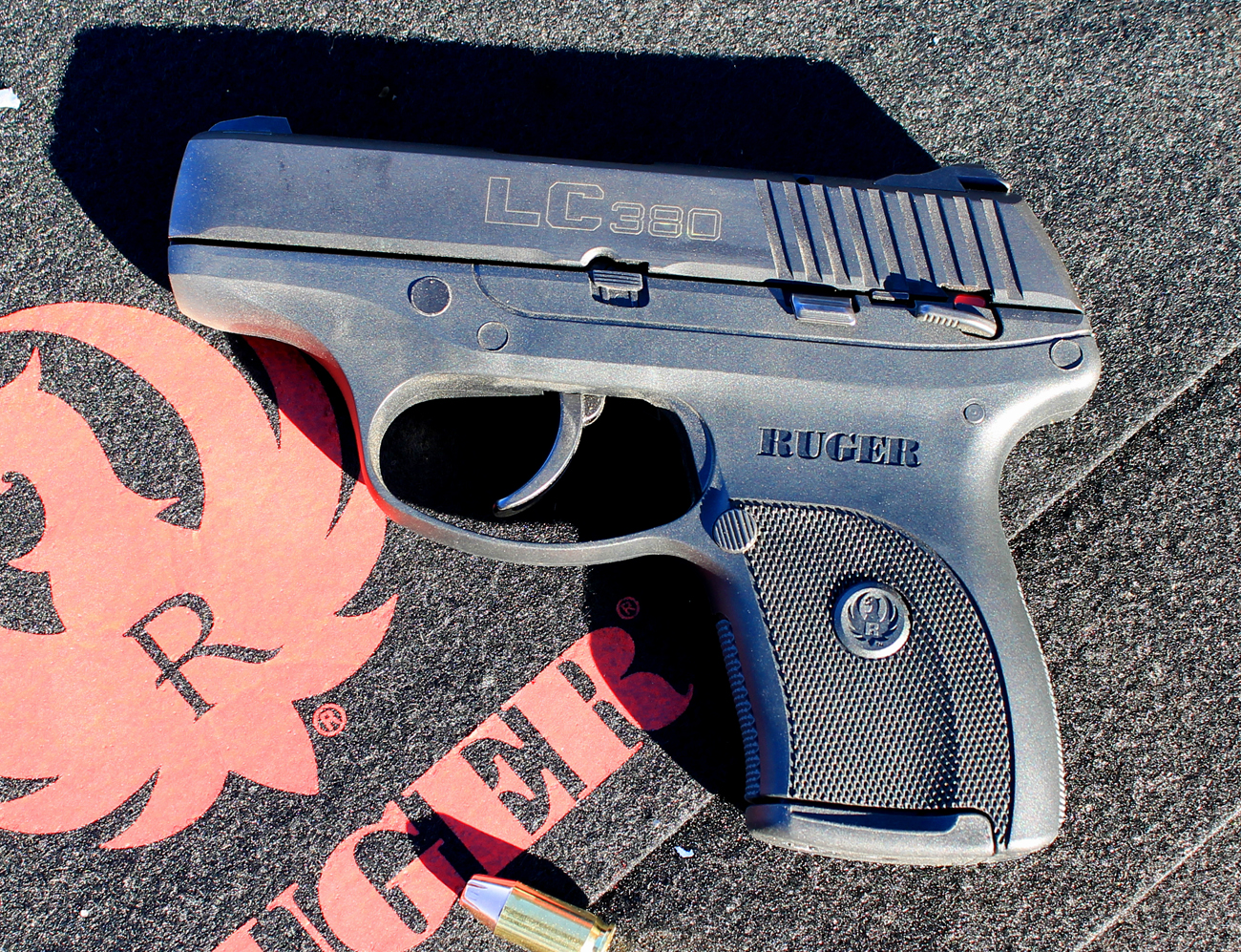 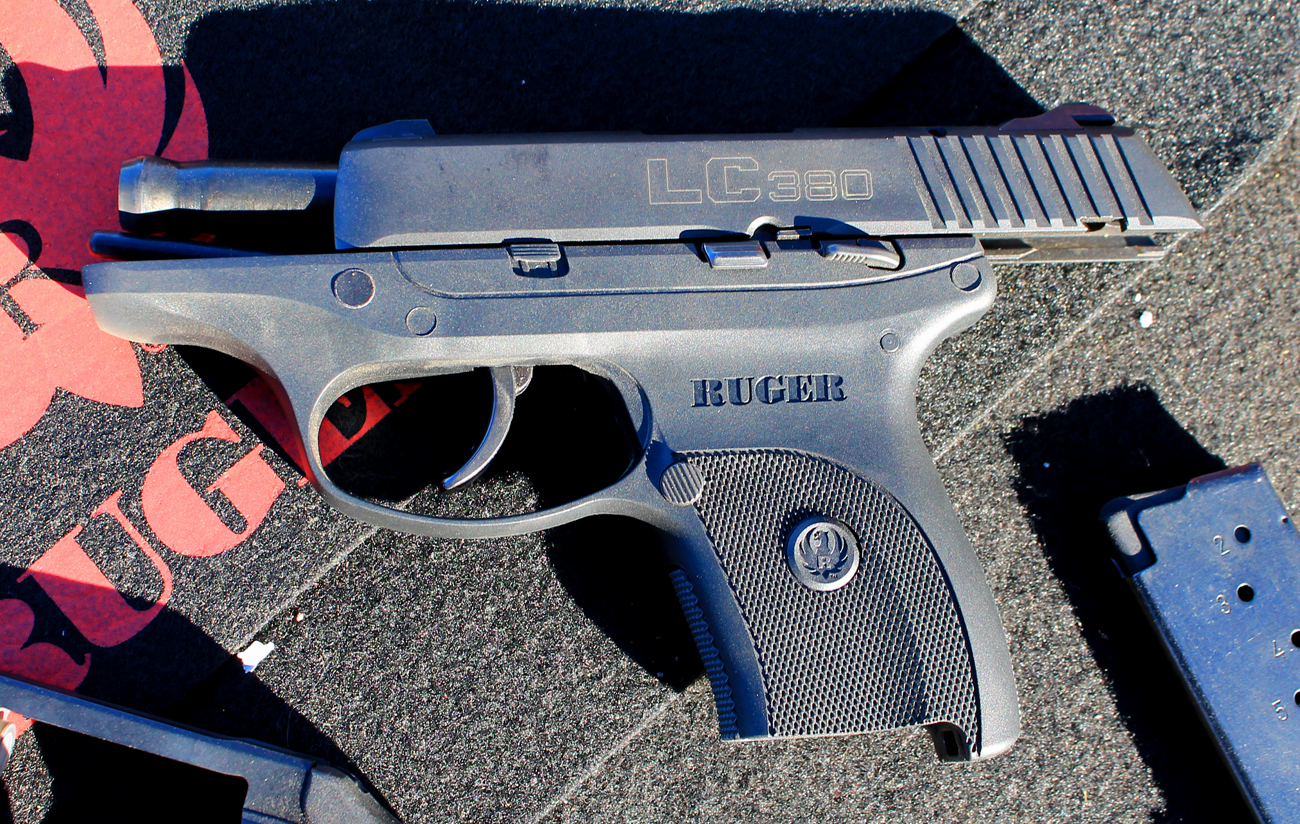 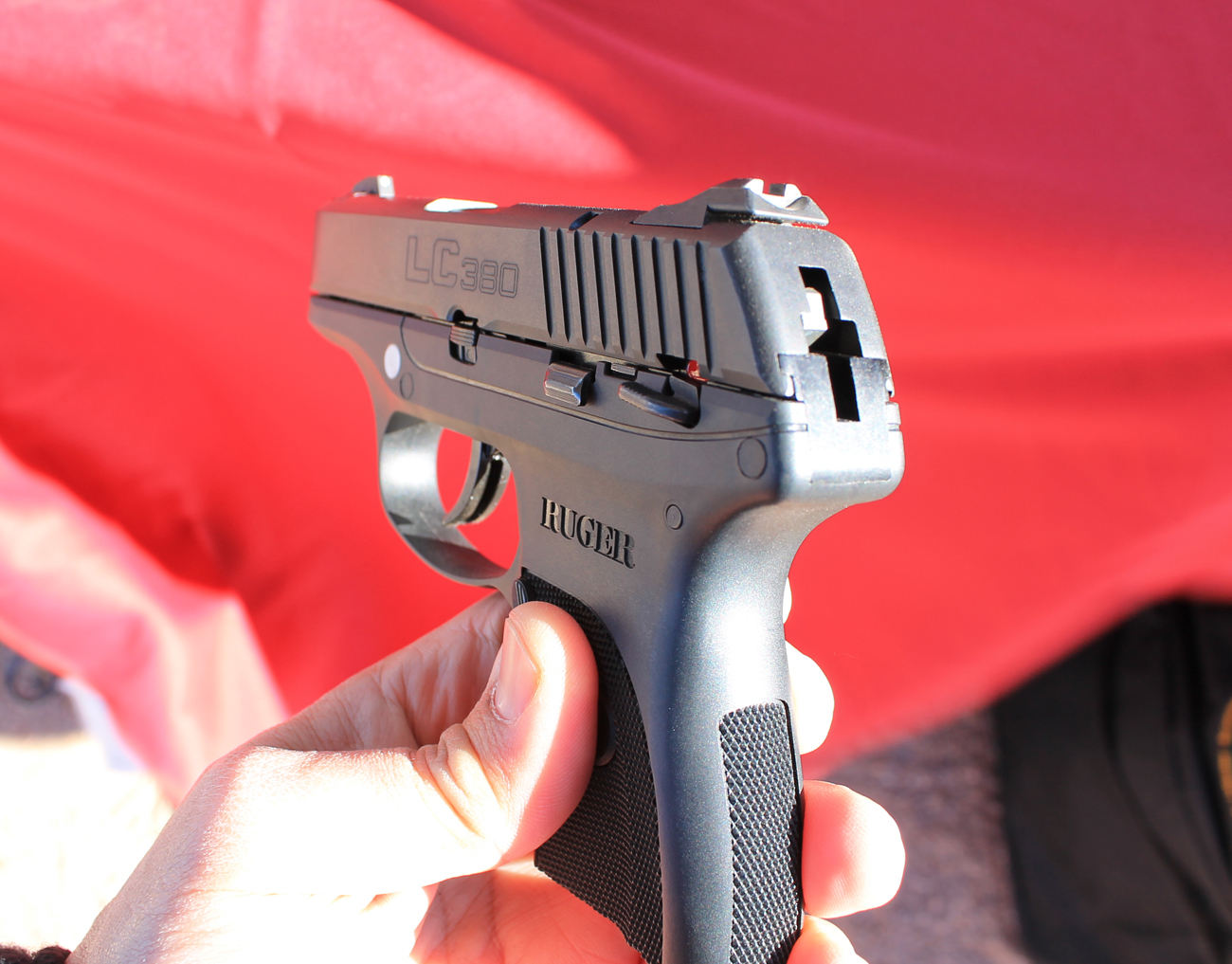 I shot the LC380 at a torso-sized steel plate that was fifteen dusty yards downrange.  The LC380 had an almost apologetic recoil:  “Bang…I’m not bothering you am I?”  The trigger was a little long in its DAO pull, but it broke on cue.  The windage-adjustable three dot sights were right at home to my eyes.

I put every bullet in the center of the plate.  The rep said, “You can’t do that with the small .380’s on the market.”  Actually, I can with my P3AT and Bodyguard 380 (and it is a requirement for department-authorized carry of them), but I will say it took less concentration with the larger LC380. 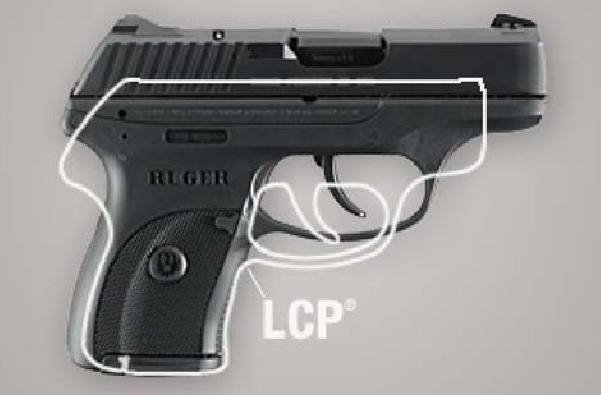 The craftsmanship put into the LC380 is typical of Ruger’s high standards.  I’ve heard some whining about the pop-up loaded chamber indicator, thumb safety, magazine disconnect, and built-in key lock as unnecessary features.  These additions would not stop me from buying an LC380.

The Ruger LC380 is a friendly gun to shoot.  I think people sometimes mistakenly buy a micro .380, believing it will be easy to carry and shoot.  To me, the tiny pistols are not for beginners.  Ruger’s full-er sized LC380 is more in line with the needs of many novice CCF buyers, who should have better ergonomics and shootability in a compact gun.