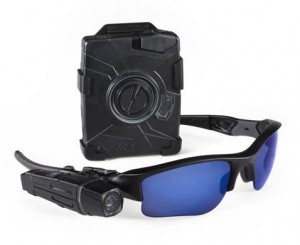 Despite the procurement of 24 body cameras by the Sarasota Police Department, the recording devices will not be worn by officers pending a lawsuit and proposed legislation in both houses of the Florida Legislature.

A civil rights activist, supported by the American Civil Liberties Union, is suing the city over the cost of a public records request for 84 hours of police video taken during the cameras’ test program.  SPD gave a price of $18,000 for compilation, review, and redaction of the videos per F.S.S. 119, the Florida Public Records law.  The ACLU contends it is an excessive charge.

SPD Chief Bernadette Di Pino has also put the cameras on hold because of two bills presently working their way through Florida House of Representatives and Senate committees.

Following a meeting with the Florida PBA, Jones said he will add an amendment to have cameras activated only during police activities.

“Public Records/Audio or Video Recording Made by a Law Enforcement Officer; Providing an exemption from public record requirements for an audio or video recording made by a law enforcement officer in the course of the officer performing his or her official duties and responsibilities, if the recording is taken within certain locations, shows a minor inside a school or on school property, or shows a child younger than 14 years of age at any location; authorizing the law enforcement agency with custody over the recording to disclose the recording to another law enforcement agency in furtherance of that agency’s official duties and responsibilities, etc. Effective Date: 7/1/2015”

There are many contentious issues surrounding the capture of video during an officer’s shift.  Where and when does a citizen have an expectation of privacy?  Should a crime victim or witness expect to see themselves on YouTube against their wishes?  Where and when can an officer have any privacy on the job?

What is a reasonable price for a government agency to exact for providing video under public records requests?  SPD quoted a cost of 458 billable hours to review the 84 hours of actual video, plus five dollars per DVD.  The lawsuit may or may not settle this issue.

Perhaps Sarasota County Sheriff Tom Knight was right in delaying his decision about the purchase, policy, and implementation of body cameras at his agency until these basic questions are answered.

This entry was posted in Legal, Technology and tagged police body camera. Bookmark the permalink.