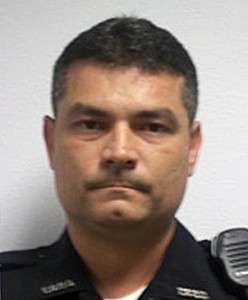 A Tarpon Springs, FL police officer was shot and killed overnight.  The suspect is in custody.  Neither the officer’s, nor suspect’s names have been released, but the Pinellas County Sheriff’s Office and Tarpon Springs Police Department said they are both male.

I will update this after a press conference is held later this morning.

Update:  The murdered officer is Ofc. Charles Kondek, 45, a 17 year veteran of TSPD and five years MOS with NYPD.  He is survived by a wife and six children.

No press conference as of 3:45 pm…  It appeared Ofc. Kondek was on a call for service when he was killed, but few other details about the shooting have been released.  The suspect, Marco Antonio Parilla, Jr, fled the scene in a white Hyundai, but crashed not far from the shooting.  After fleeing on foot, he was apprehended hiding under some stairs by TSPD officers.

Update:  TSPD Chief Robert Kochen and Pinellas County Sheriff Bob Gualtieri held a press conference at 5:00 pm.  Around 2 am, Ofc. Kondek responded to a noise complaint at an apartment building at 199 Grand Blvd.  At the scene, Ofc. Kondek encountered Parilla, who was armed with a .40 cal. handgun.  Parilla was aware that he had a felony warrant for Violation of Probation and was at the apartments to find a person he thought had been responsible for his VOP.

Upon seeing the officer, Parilla fired multiple rounds at Ofc. Kondek, striking him once in the neck above his ballistic vest.  Ofc. Kondek was able to return fire, but he did not hit the suspect.  Parilla then ran over the downed officer as Parilla fled in his sedan.  Parilla was apprehended as described above.  Parilla had been released from DOC in March 2014.  He had over 45 arrests, 30 for felony charges.  Parilla’s motive for shooting and killing the officer was to avoid going back to prison.

I am sure most of you feel the same way I do about this cowardly, senseless murder of a law enforcement officer.

RIP Ofc. Kondek.  Your family is in our thoughts.

One Response to Tarpon Springs Officer Down