Windermere Police Officer Killed in the Line of Duty 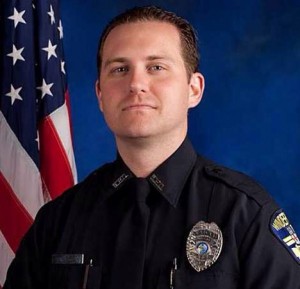 Windermere Police Officer Robert German was murdered at 4 a.m. today while on a suspicious persons stop.  He was apparently shot to death by two subjects he had stopped walking on Conroy-Windermere Road and Horizon Circle in Orange County.

After Ofc. German radioed for assistance, several Orange County deputies, an Orlando officer, and an Ocoee officer found Ofc. German wounded at the scene.  Deputies and officers heard more shots fired in the area and they used a police car as cover while they moved Ofc. German to waiting OCFRD paramedics.  Ofc. German was pronounced dead at Orlando Regional Medical Center.

A male suspect and female suspect ran about a block from the original stop and were found by search teams.  They had both committed suicide by gunshot, according to Orange County Sheriff Jerry Demings.  Ofc. German’s murder occurred a mile from where OCSO Deputy Jonathan Scott Pine was killed in February of this year.

Born in Burlinton, Ontario, Canada, Ofc. German, 31, was raised in Central Florida.  He joined the fourteen officer Windermere Police Department five years ago and is the first officer killed in the line of duty at that department.  Funeral arrangements will be announced by WPD.

Prayers to Ofc. German’s family.  Please stay safe and have each others’ backs, Brothers and Sisters.