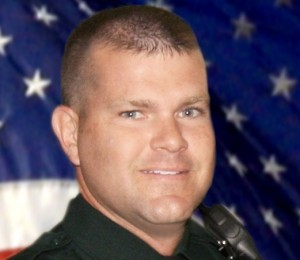 Orange County Sheriff’s Office Deputy Jonathan Scott Pine was apparently ambushed and murdered during a foot chase last night.  Dep. Pine was pursuing an auto burglary suspect that had fled from him, when the suspect shot Pine in a backyard.  Dep. Pine, a three year veteran of the OCSO, leaves behind a wife and three children.

The murderer was violent felon who had been released from prison in 2012 after serving just three years of a seven year sentence for two bank robberies in Maryland.  He committed suicide several houses away from Dep. Pine’s shooting.

Our condolences to Dep. Pine’s family and co-workers.