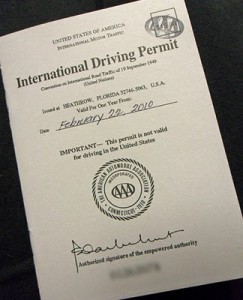 Our Dispatch Center was recently besieged with calls from upset Canadian citizens seeking information on how to obtain an “International Drivers License.”  This rush was apparently was spurred by letters sent to the Canadians by their government urging them to apply for these licenses immediately based upon a new Florida law requiring all non U.S. residents to carry this new document when driving.  The situation was made worse by the fact that no one in our Dispatch was clear about what the frantic Canadians were talking about.

The debate about the requirement for IDP’s became heated this week and the Florida Division of Highway Safety and Motor Vehicles issued this statement on 2/14/2013:

“During the 2012 legislative session, the Florida Legislature amended section 322.04, Florida Statutes, to require visitors from outside the United States to have an International Driving Permit in order to drive lawfully in Florida. This change took effect Jan. 1, 2013.

“Therefore, the Florida Highway Patrol will defer enforcement of violations of the amended statutory section until a final determination of the alignment of the amendment with the treaty can be made. Non-resident visitors to Florida who wish to drive while here will be required to have in their immediate possession a valid driver license issued in his or her name from another state or territory of the U.S. or from their country of residence. However, the FHP will not take enforcement action based solely on the lack of an International Driving Permit.”

I have fielded officer complaints over the years from foreign visitors arguing with me about their “International Drivers License” being valid and the officer in question was wrong to ask for their (fill in the country) home drivers license.  One man from India screamed at me that the officer and our whole department was mistaken about IDP’s and demanded an apology.  My officer had only issued him a written traffic warning.

Tourism being an important part of the Florida economy, we try to resolve these conflicts with patience and a good base of information.  In short, drivers of all nations still need to carry their valid drivers licenses to drive in the Sunshine State.