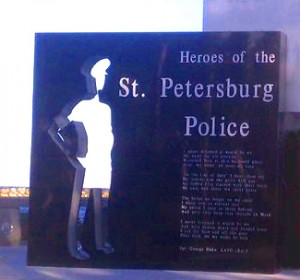 I had the honor of attending yesterday’s unveiling of the new memorial dedicated to fallen St. Petersburg police officers.  A few hundred citizens, law enforcement officers, and dignitaries stood in solemn tribute to the fifteen officers who have lost their lives in the line of duty protecting and serving the citizens of St. Petersburg since 1903.  The memorial proudly stands near the bay in Demens Landing, the waterfront park dedicated to city founder, Peter Demens.

A piper from the Pinellas County Sheriff’s Office began the proceedings with Amazing Grace.  Speakers included St. Pete Mayor Bill Foster, Councilwoman Leslie Curran, representatives of the non-profit Heroes of the St. Pete Police foundation, and architects for the project.

The St. Petersburg Police Honor Guard laid a wreath and were assisted in the proceedings by the Hillsborough County Sheriff’s Office Honor Guard.  The names of the fallen officers were read by St. Pete Chief Chuck Harmon.  A police helicopter flyover, 21-gun salute, and Taps concluded the ceremony.

The granite monument features a silhouette of a St. Petersburg officer, which represents those who are now missing.  To the right and behind the granite slab is an aluminum monolith into which are cut the names of the fifteen officers.  The American Flag completes the freestanding elements.

Though I don’t feel that a man-made structure can truly represent the lives sacrificed and contributions made by these men, I was heartened by the public attendance and reverence shown on the windy day.  I think the real memorial was in the gathering of good people:  citizens and cops, the young and the…experienced, the grieving and the stalwart.  I saw many handshakes and genuine heartfelt greetings as those who arrived joined a group that seemed connected, not by death, but by their value of life.

Did I say I was honored to have been in attendance?  I certainly was.