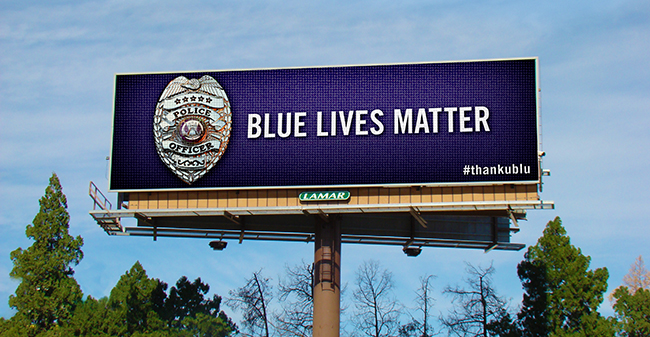 Tactical Magic creative director Trace Hallowell said a citizen approached him about honoring those who serve in local law enforcement.  The original Tactical Magic billboards, which went up in June showed support for the Memphis PD.

As the popularity grew, Hallowell approached Lamar about a national campaign.  “This time the message was simply to affirm the humanity of our men and women in uniform.  No one should be a target of violence because of what they wear,’’ Hallowell said.  Lamar agreed to widen their distribution on their company-owned digital billboards.  The new message can be seen from Oregon to New York, and from Iowa to Texas.

“At Lamar Advertising Company, we are proud to support law enforcement,” said Lamar Advertising Vice President of Governmental Relations Hal Kilshaw.  “We’re using our digital billboards to voice respect for police officers across the country who put their lives at risk every day to keep the public safe.  This is our way of saying thank you.”

I, for one, appreciate the positive gesture.

This entry was posted in Media, Misc., Politics. Bookmark the permalink.