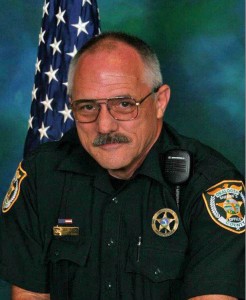 Okaloosa County Sheriff’s Office Deputy Bill Myers was murdered on a domestic violence injunction call this morning.  After serving the injunction, Dep. Myers was shot and killed from behind by the suspect.  The press release below is from OCSO’s public information officer.

A longtime veteran of the Okaloosa County Sheriff’s Office who rejoined the agency to serve part-time after retiring in 2013 has died at Fort Walton Beach Medical Center following an early morning shooting in Shalimar.

Sixty-four year old Deputy Myers retired from the OCSO in November 2013 after nearly 25 years with the agency. He was re-hired on a part-time basis in January of this year to assist with Civil Process.

Investigators say Myers had just finished serving a domestic violence injunction to 33- year old Joel Dixon Smith of Navarre at Cotton and Gates Law Firm on Plew Avenue around 8:20 a.m. Deputy Myers was walking outside when he was shot multiple times in the back, including a gunshot wound to the rear of his head.

Investigators say the suspect in the shooting, 33-year old Joel Dixon Smith of 9807 Navarre Parkway in Santa Rosa County, then drove to the Comfort Inn and Suites, 148 John Sims Parkway, in Niceville, where he barricaded himself inside a room.

The OCSO Special Response Team responded and evacuated the building, setting up a perimeter. After an hour and a half of negotiations, the suspect came out of his room with a weapon at 11:13 a.m. Deputies responded and the suspect was struck and taken to Fort Walton Beach Medical Center where he later died. No members of the SRT Unit were injured.

“Deputy Myers has been a treasured part of this agency’s family since 1989,” said Sheriff Larry Ashley. “He served this community with distinction for decades. He was loved, admired, and respected for his dedication to the law enforcement profession. He loved photography and he had an ability to make those around him smile, especially his young granddaughter who he adored and took to Disney World as often as he could. We pray for his soul and for his family and we ask that the community pray for them as well, and for all the men and women who have the courage in these troubled times to put their lives on the line for others.”

“We also want to express our sincere gratitude to all of you who have reached out to our agency at this time with words and gestures of support, and to all the agencies which assisted us today at the scene of the shooting and in Niceville.”

Our condolences to Dep. Myers’ family and his colleagues at OCSO.