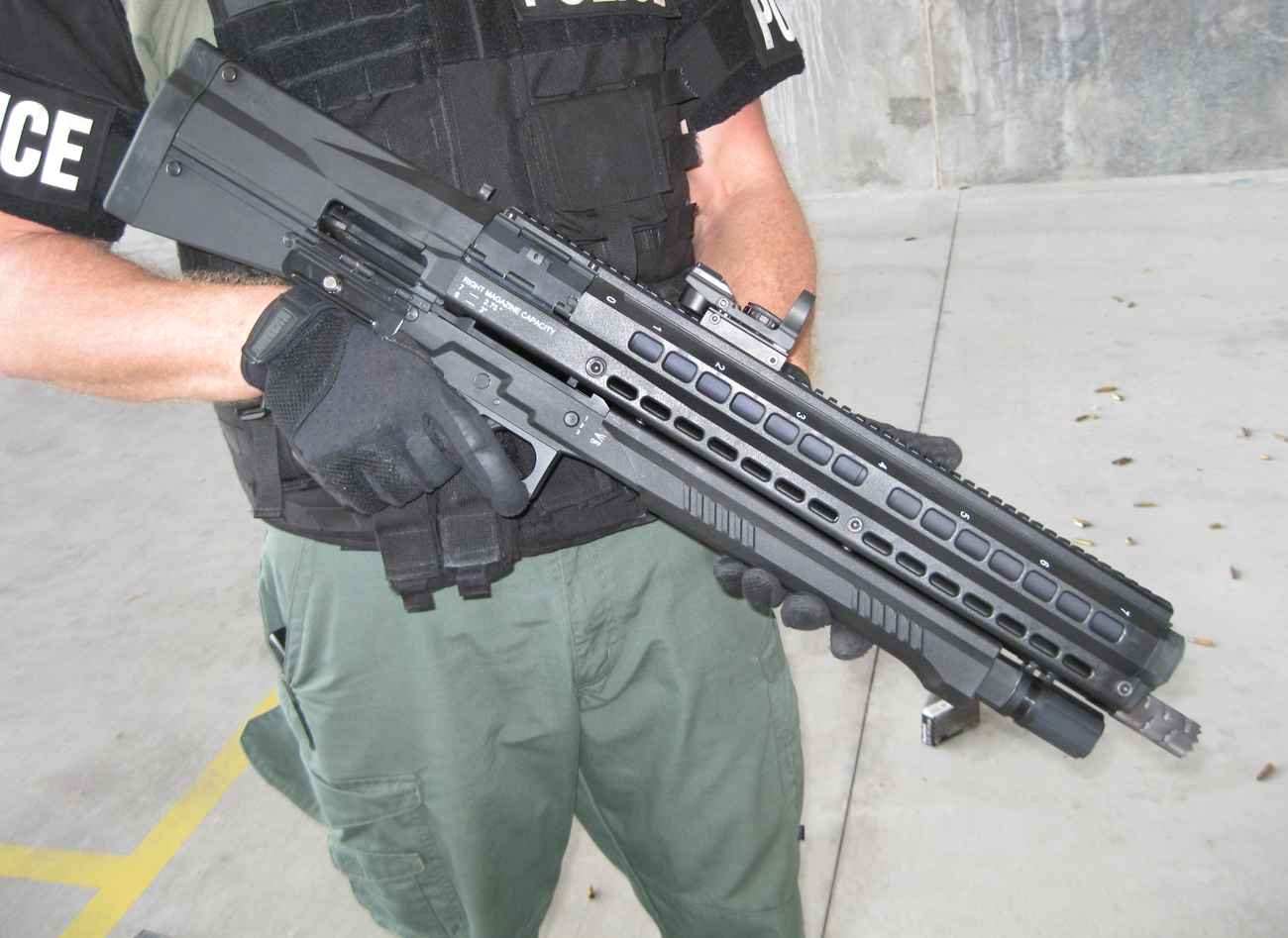 On SWAT training days, you see some strange weaponry brought out to the range.  This is an UTAS UTS-15 military and police combat shotgun.  It has a 15 round capacity of 2 3/4″ 12 gauge shotgun shells, feeding from two 7 round tubular magazines above the 20.5″ barrel.  Overall length of the gun is 28.3″ and its weight is a light 6.9 pounds.

UTAS (pronounced YOO-tash) is a Turkish firearms company that prides itself on innovative design.  That is apparent in the UTS-15’s build.  UTS-15 is a pump-action, bullpup shotgun. The receiver is 100% fiber reinforced injection molded polymer.  In fact, 80% of the gun is polymer. Between photos one and two below, you can see only moderate muzzle climb during a shot, despite the shotgun’s light weight. 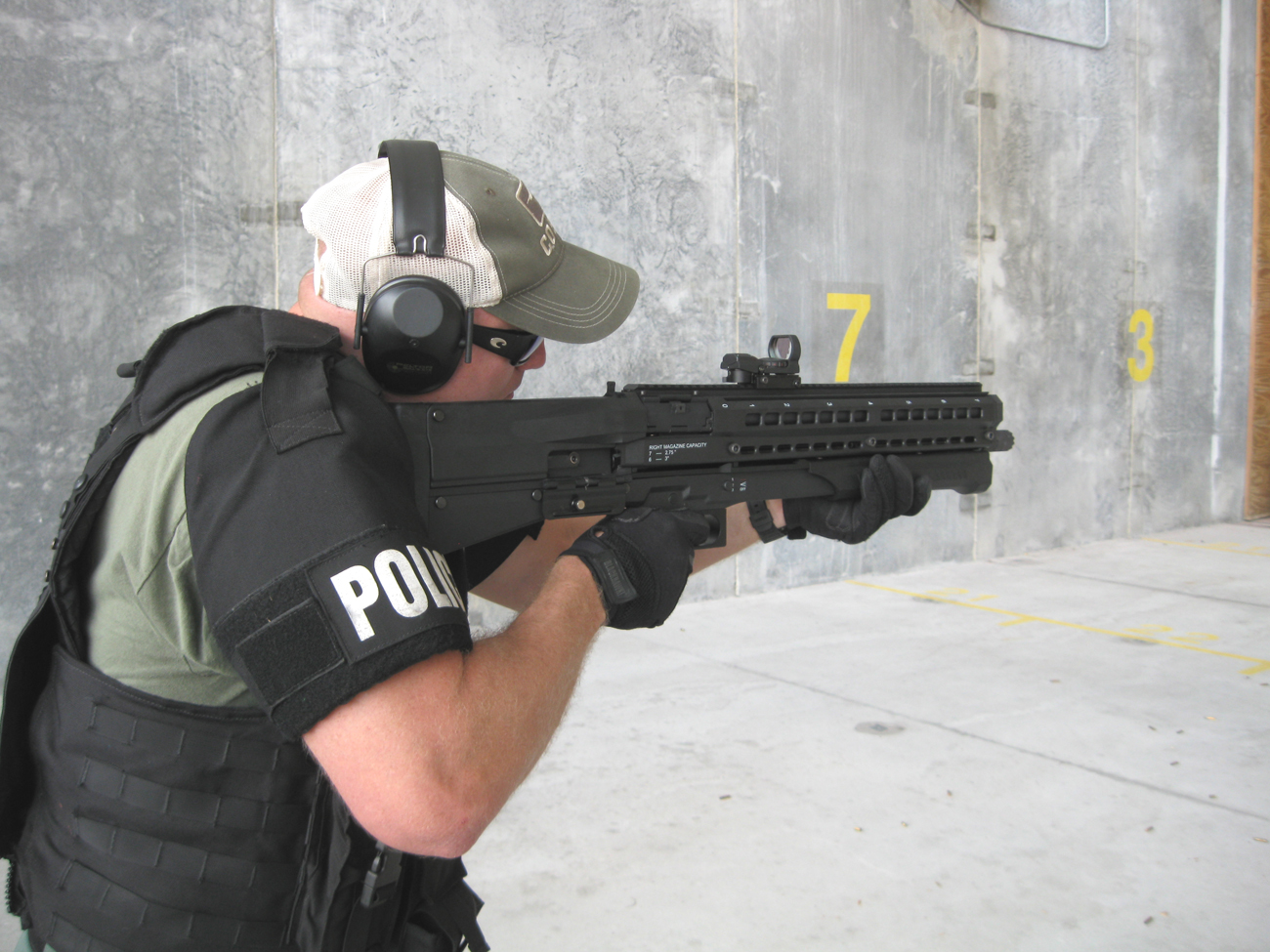 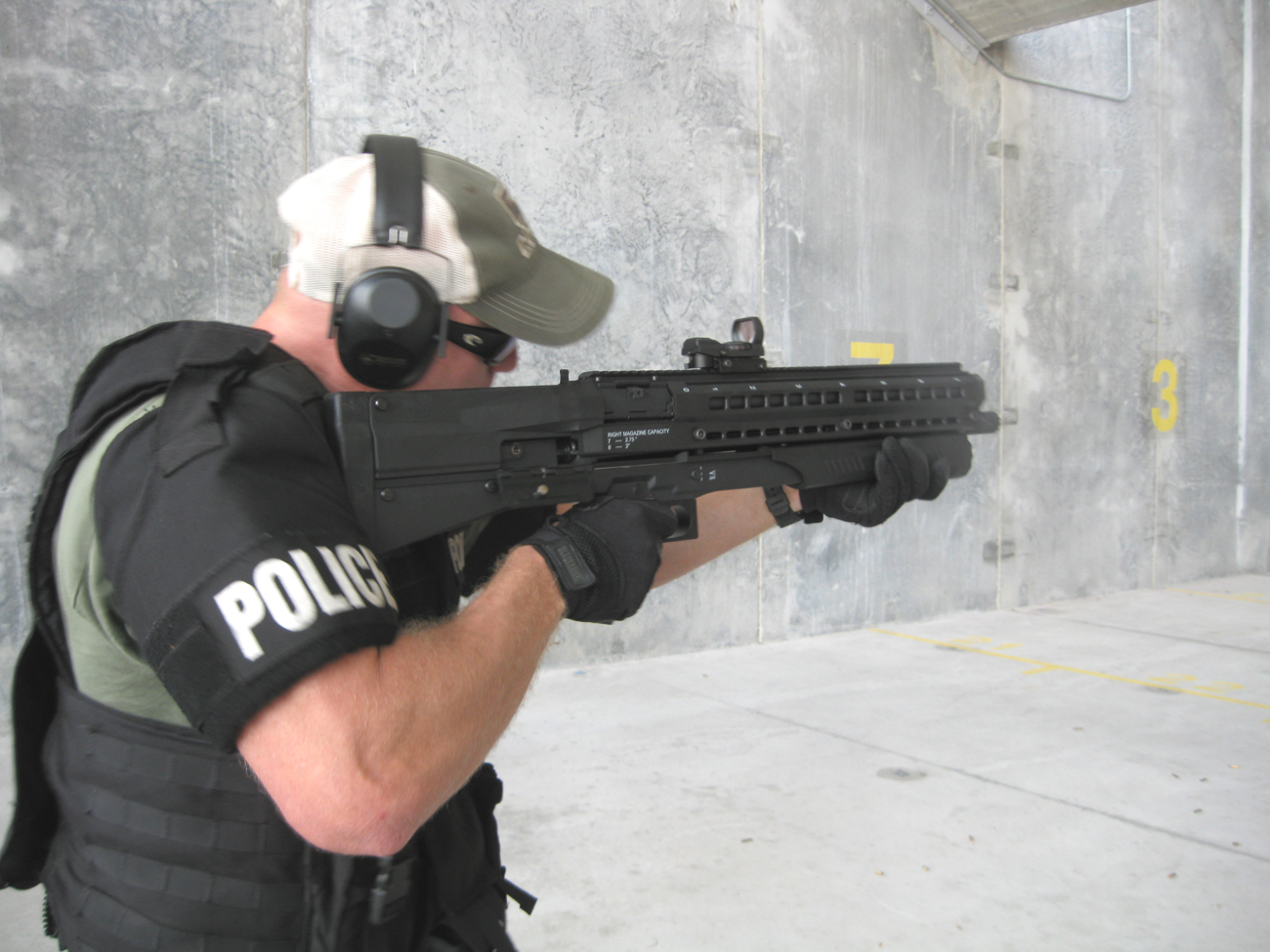 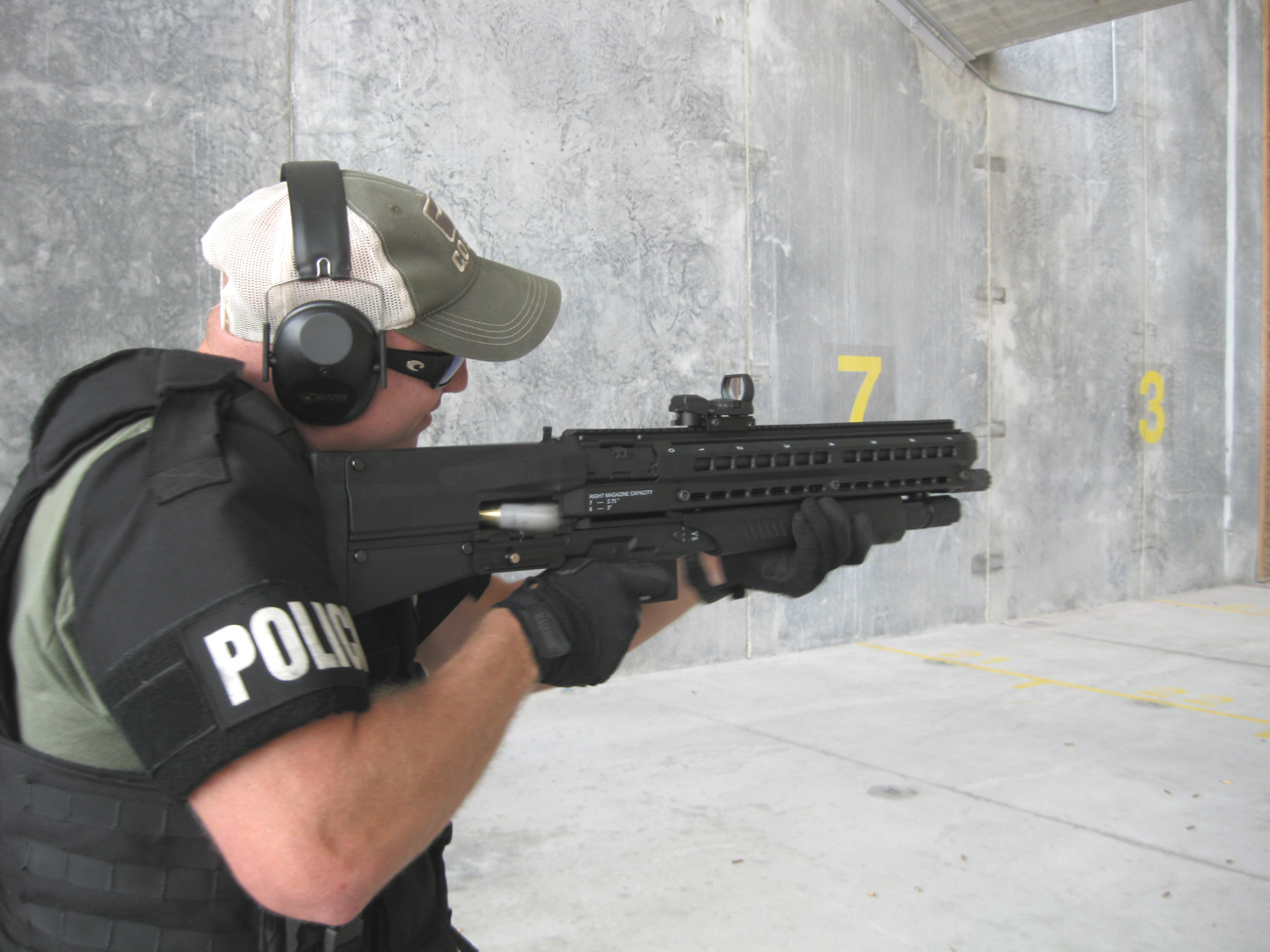 The shotshells are visible along the top of the gun through slots in the magazines.  At a glance, you can see how many booms you get from either side.  A full length Picatinny rail rides atop the mag tubes.  Our specimen had an owner-affixed red dot sight. 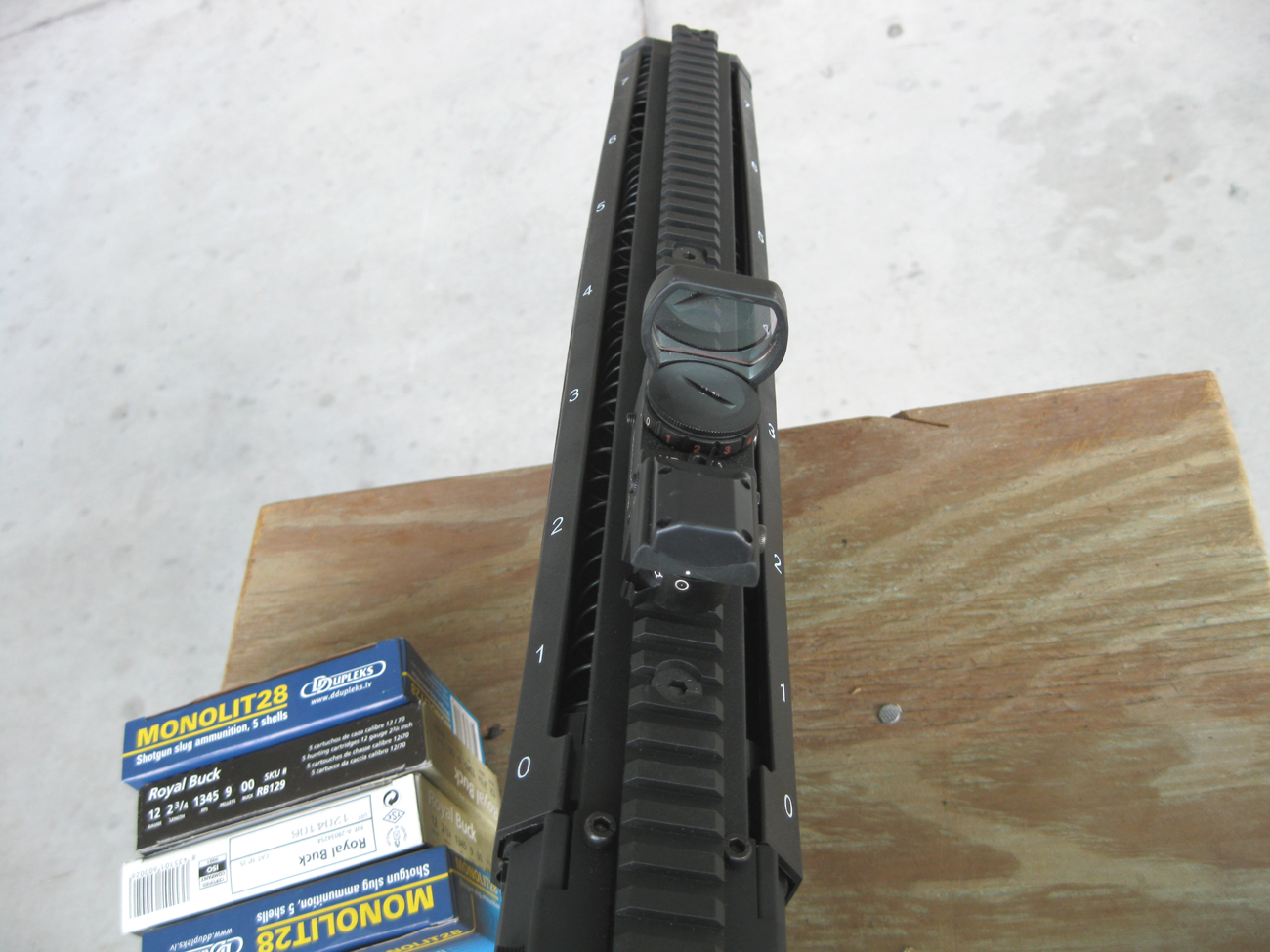 On the left and right sides of the gun are loading ports, which have gates that are manually shut after the last round is inserted.  The ejection port is below and behind the right loading gate.  The safety selector switch rides on the left side of the receiver and is familiar to AR-15 users.

The UTS-15 can be fired from a single side magazine tube, or fed alternately by both tubes.  A rocker switch on the top of the gun lets you decide how it feeds.  This can be handy because slugs could be inserted in one tube and buckshot in the other.  Just by flipping the switch, you can choose which one gets shucked in next.

The UTS’ owner said he liked how quickly and easily it broke down for cleaning.  He then took it apart so fast, I’m not quite sure how he did it. 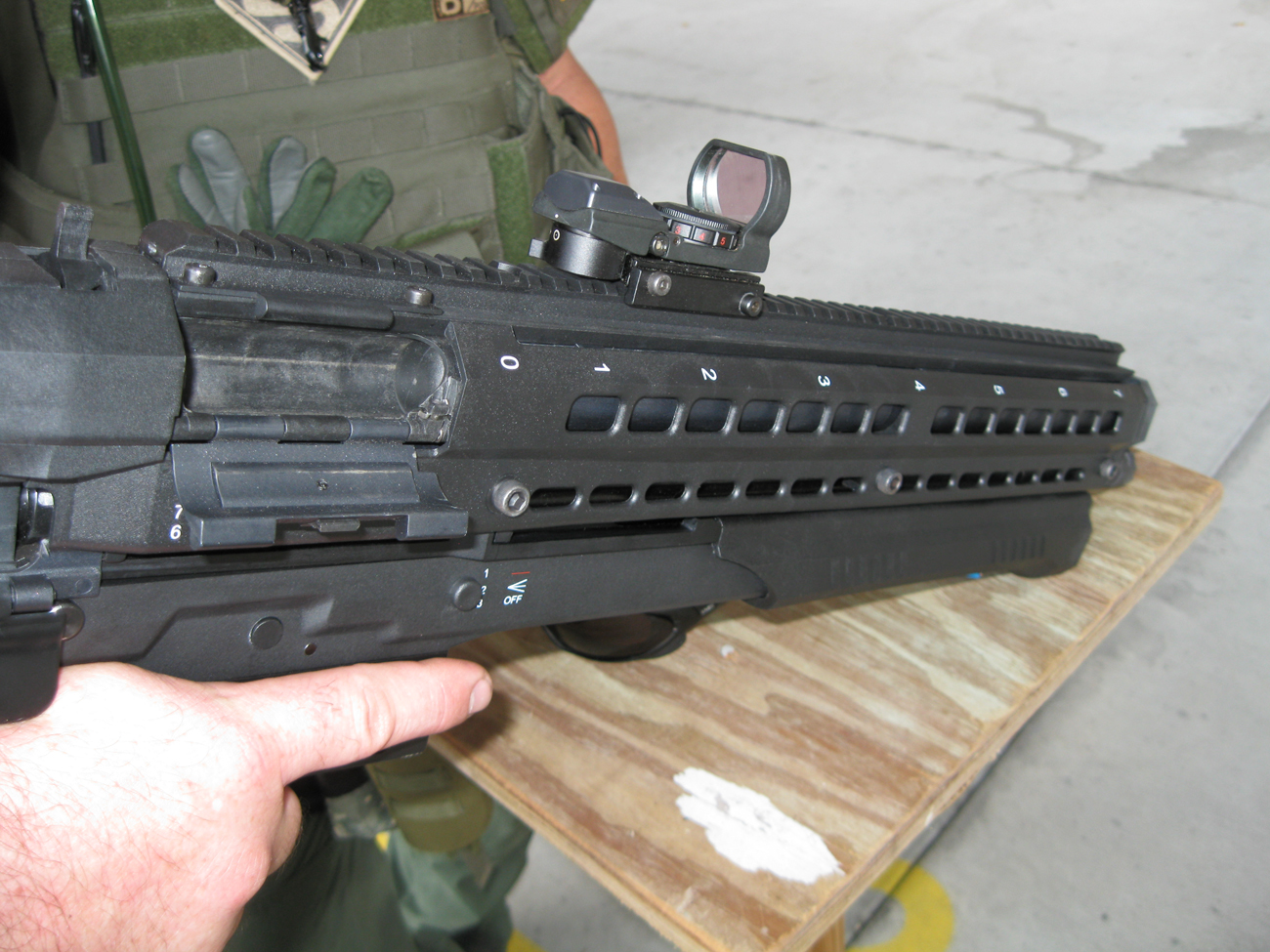 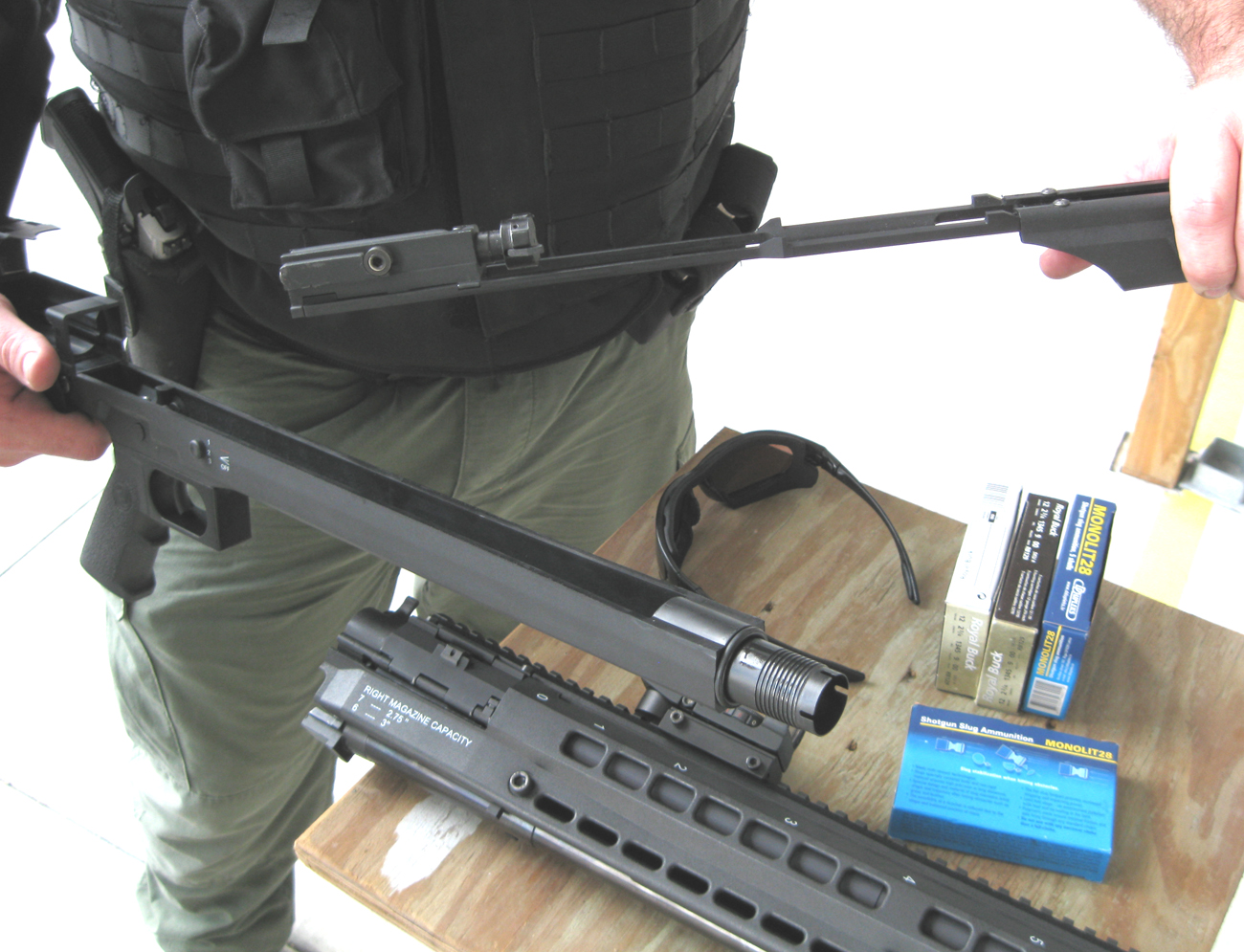 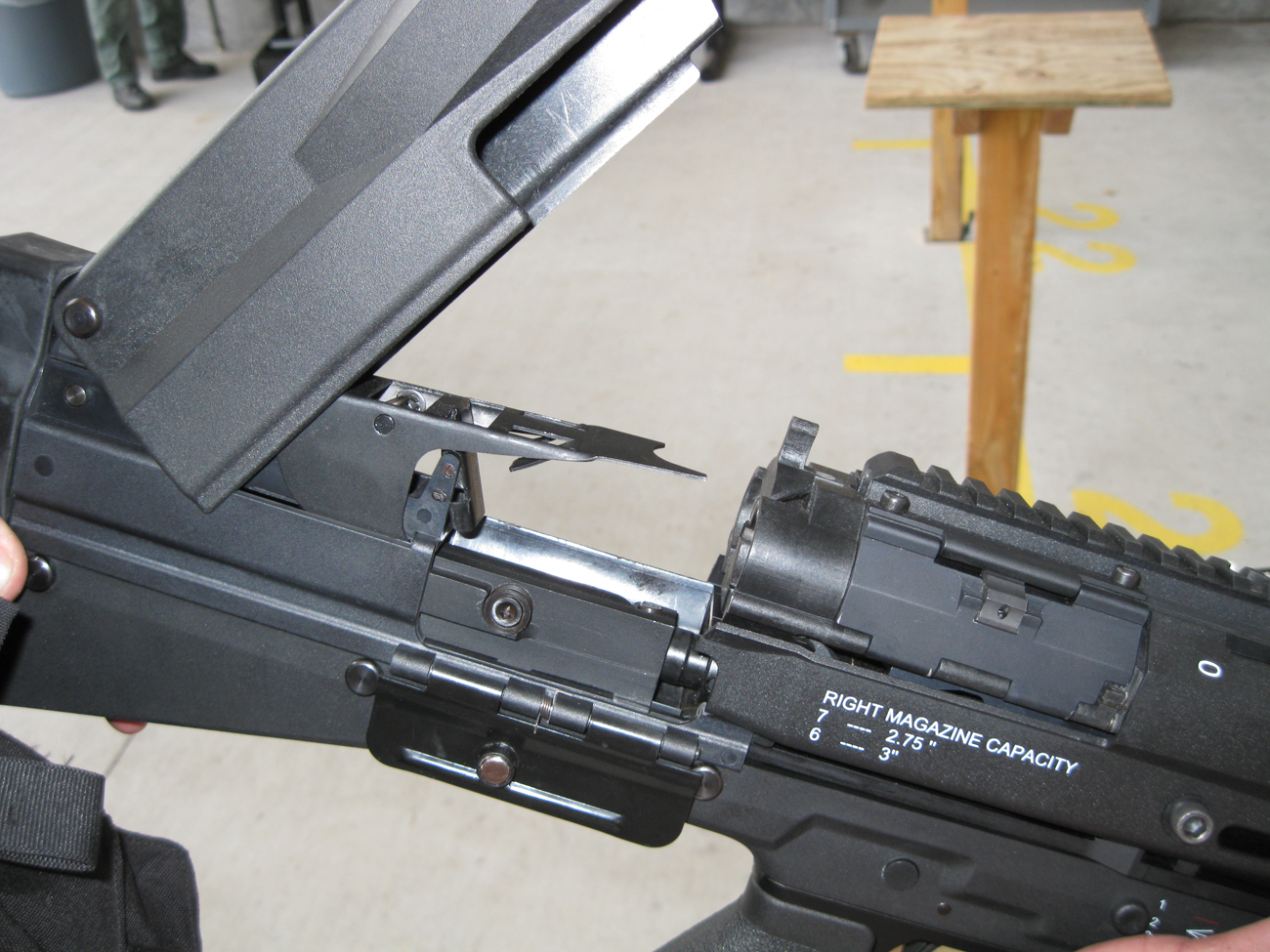 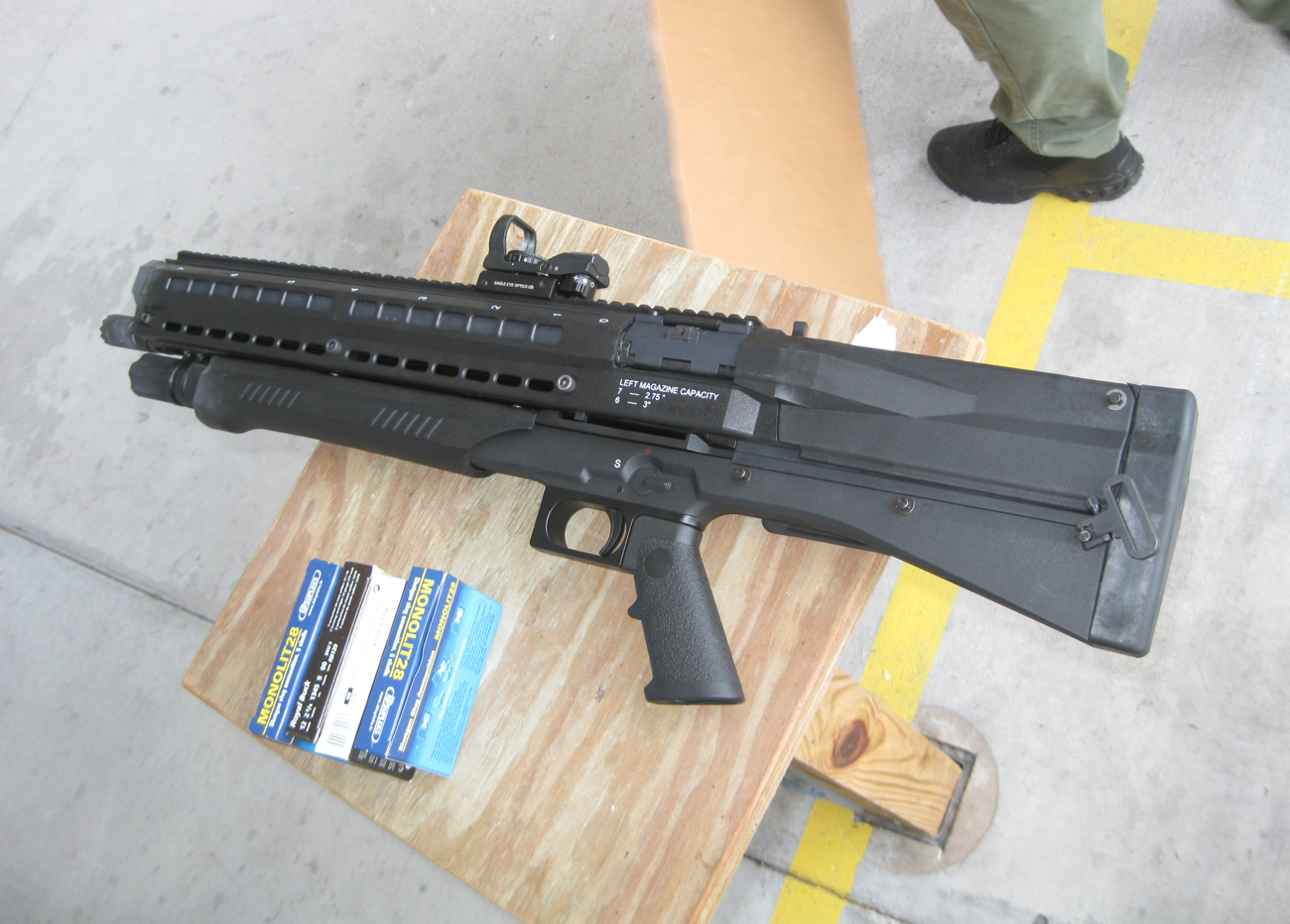 At the range, the UTS functioned very well, indeed.  As long as you run the slide fully to the rear with authority, the shells hammered out, then in, reliably.  I saw one shooter short-stroking the pump-action and causing his own feeding problems.  Operator error, this same thing happens with Remington 870’s when the operator doesn’t keep up his end of the bangstick bargain.

The shotgun was…well, shotgun accurate–throwing buck and slugs downrange right where they were aimed.  The bullpup design allows for a full 20.5″ barrel, which is a boon to the gun’s overall accuracy.  Either 2 3/4″ or 3″ shotguns shells can be ignited from the UTS.

As a pump-action shotgun with dual magazines, it will surely be compared to the Kel-Tec KSG.  The UTS-15 is a little over 2″ longer than the KSG, but the UTS has 2″ more barrel length.  Both guns depress the scale to 6.9 pounds.  At an MSRP of $1200.00, the UTS is about the same as the $1197.00 MSRP of the Kel-Tec, but some have been paying double the Kel-Tec suggested price (that’s supply and demand, folks). My teammates liked the UTS-15, and so did I.

This entry was posted in Firearms, SWAT and tagged Bullpup Shotgun, Police Shotgun. Bookmark the permalink.