Back in May 2011, I attended the Special Operations Forces Industry Conference in Tampa, Florida.  At the Vendor Exhibit, I spied the familiar profile of the Warrior combat knife in the Spyderco Booth.  Kristi Hunter, Spyderco’s Government Sales Specialist, allowed me to handle the prototype for their Pygmy Warrior, a scaled down version of the Warrior.

I liked the size, weight, and overall ergonomics of this small fighter.  It being the sole prototype at the time, I was more than a little proud to have examined and manipulated it.  The Pygmy Warrior has a definite place as a back-up knife on a SWAT operator’s vest.

The Warrior knife has a history so interesting, Spyderco’s Special Projects Coordinator and Martial Blade Concepts founder, Michael Janich wrote a book detailing its birth and evolution called “The Warrior Path.”   This book is included in the box with each Spyderco Warrior knife.

In short, Hwa Rang Do martial artist Randy Wanner, his student Michael Echanis, and combat veteran Bob Taylor all contributed to the basic design of the Warrior, a reverse-grip fighting knife.  Bob Taylor is credited with designing this latest version.

In this edge-out hammer grip, the curved blade of the knife is designed for full power downward strikes, while the “saw-tooth” back edge is designed for trapping and manipulating the opponent’s limbs.

At SHOT Show 2012, I met with Michael Janich and he explained some of the features of the Pygmy Warrior.  It will be a full tang knife with the steel being CTS-BD1, a Carpenter Technology vacuum-melted stainless steel, with metal additions that offer superior edge retention.

The dimensions of the Pygmy Warrior will be:

The blade will have a high hollow grind and the tang will feature a “skull crusher” pommel and lanyard holes fore and aft.  The blade will be subdued and protected by DLC (diamond-like carbon) coating.  He said multi-position sheath is set to be Kydex.

Janich said the handle scales will be stackable, so that the individual user can determine the thickness of the handle.  Since the scales are also removable, the knife can be configured as very thin without scales or wrapped in paracord, too.

Further explaining its function, Janich demonstrated how the knife had a blade-to-handle angle that matched the arc of the human arm during a reverse-grip stab.  This sends full power to the tip of the knife in a thrust (Unfortunately, videos were 99% verboten at the booth this year).

The trapping function can be used to draw in or hold a limb, or to aggressively cut in a pulling motion.  The use of this knife is very specialized and it should be employed by those trained in its advantages. 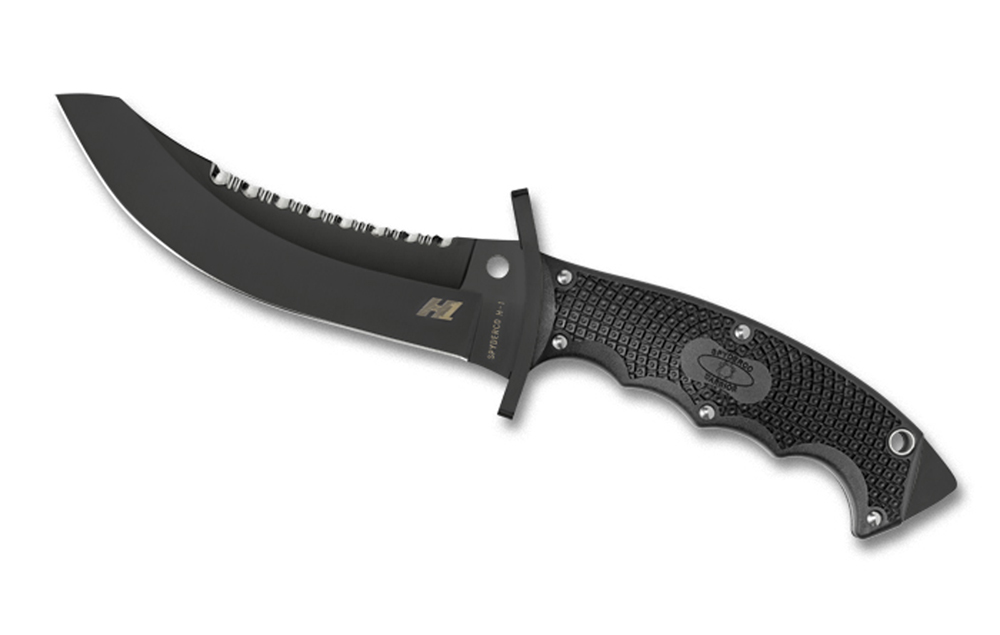 Warrior knives and their progeny have been sold by Al Mar Knives, REKAT, and Spyderco..  Spyderco’s current Warriors were inspired by Israeli marital artist Guy Rafaeli and founder Sal Glesser.  “The Warrior Path” can be purchased from Spyderco.

Release of the Pygmy Warrior should be this calendar year.  Pre-orders are being taken at some retailers.  No firm word on pricing yet, but I think those of you that have read this far will need this knife and not really care about the cost.  Just spit-balling here.

Update:  Sal Glesser confirms the Pygmy Warrior will be Made in Golden! and ship with two sets of scales for the handles.