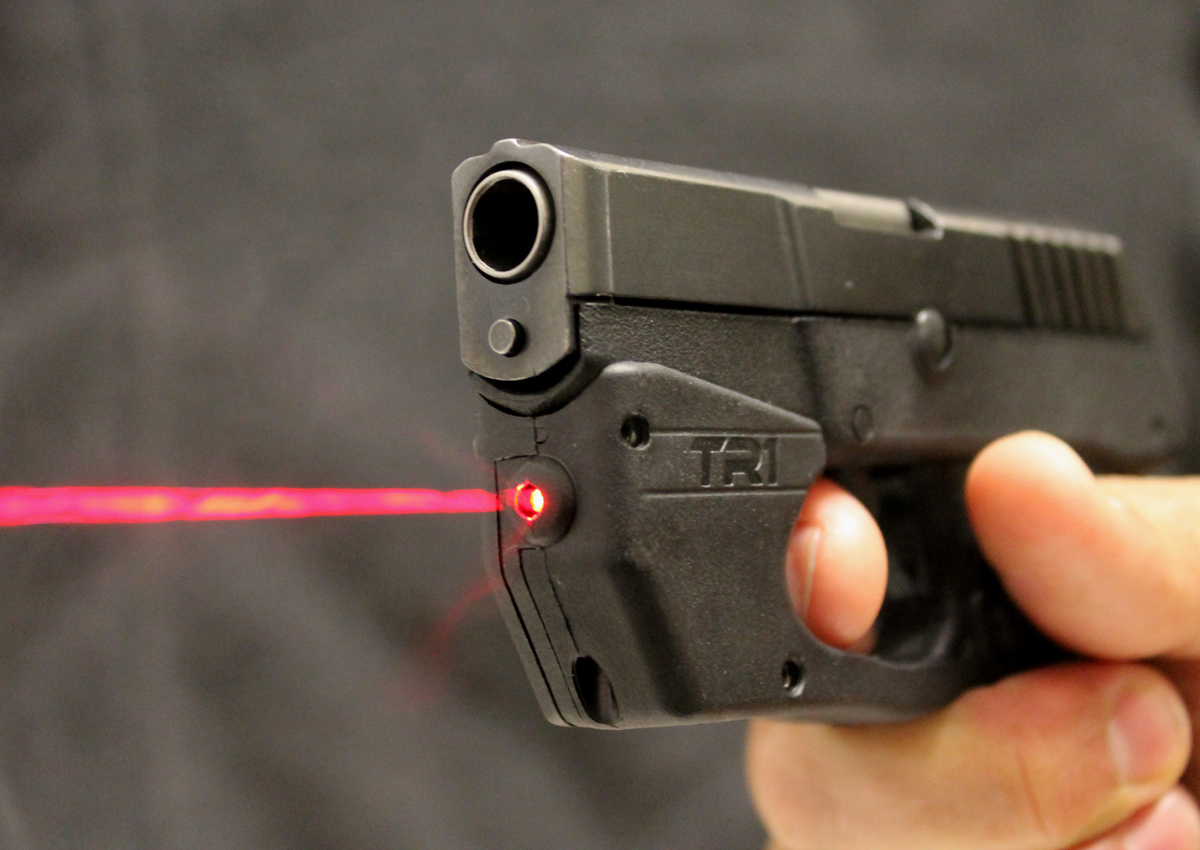 Gainesville, FL-based ArmaLaser, Inc., is best known for their Small Block laser sighting system which features a “touch activated” switching system.  If you have not seen the video where they drop their gun-mounted laser 100 times from 10 feet onto concrete, I have included it below.  Yeah, the laser still worked.

A couple of months ago, I saw a gun magazine ad for a new ArmaLaser product in the works for the Kel-Tec P3AT/P32 series:  the TR1 Touch-Reflex Laser.  I liked its sleek look.  Although the Small Block has its own touch activated switch and rugged construction, I can’t seem to get past its chunky profile.  I’m shallow.

ArmaLaser’s new TR1 houses an industry-leading 5mW, 635 nm red laser in a durable DuPont Zytel frame.  The laser is the highest output available and brighter than most of their competitors’ offerings.  Zytel is the same sturdy material employed in the Kel-Tec’s polymer frame.

I bought an ArmaLaser TR1 from an on-line retailer as soon as I saw them available.  I paid fewer than a hundred bucks for the unit.  That is very inexpensive for a gun sight using Light Amplified by Stimulated Emission of Radiation.

Mounting the TR1 to the Kel-Tec was easy.  The laser assembly sandwiches on to the gun’s lower receiver and trigger guard without modification to the pistol.  ArmaLaser thoughtfully includes a small screwdriver and Allen key to complete business.  I found the TR1 is designed to use Zytel’s stiffness and two small bolts to provide a snug fit between gun and laser that I have no doubt will survive reasonable knocks and keep the laser zeroed. 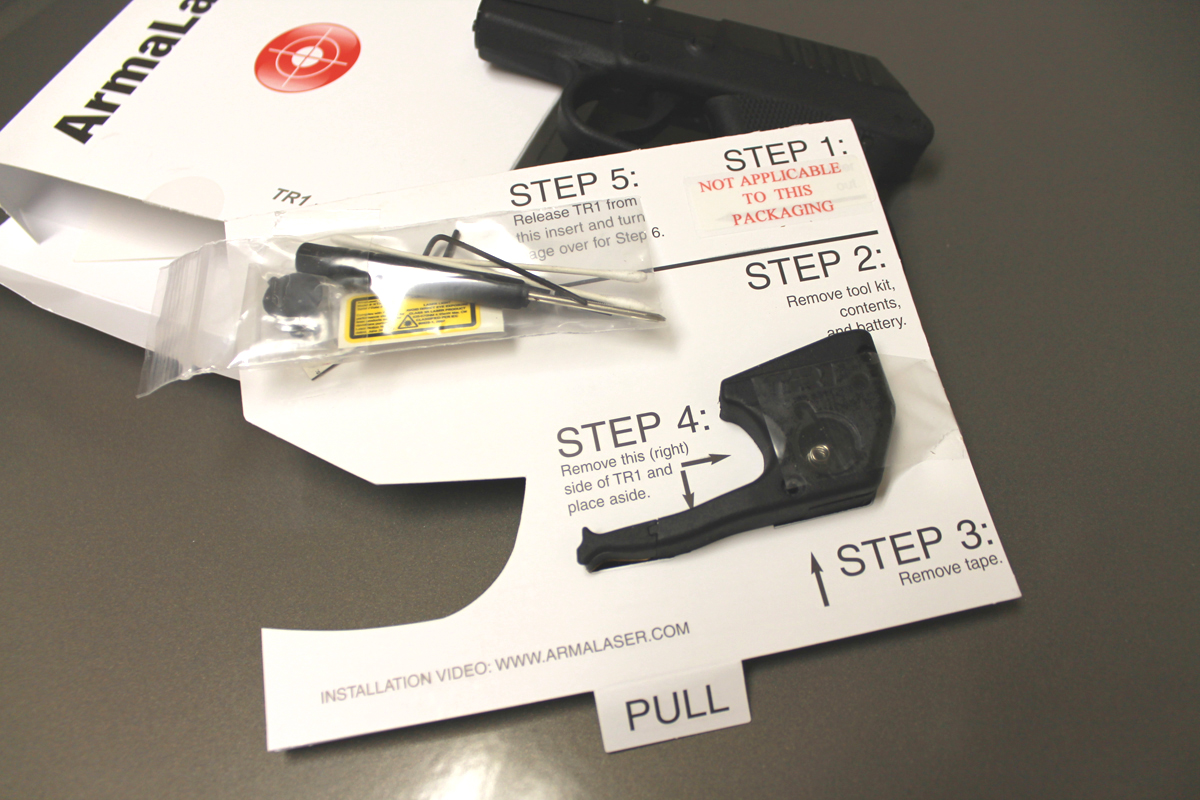 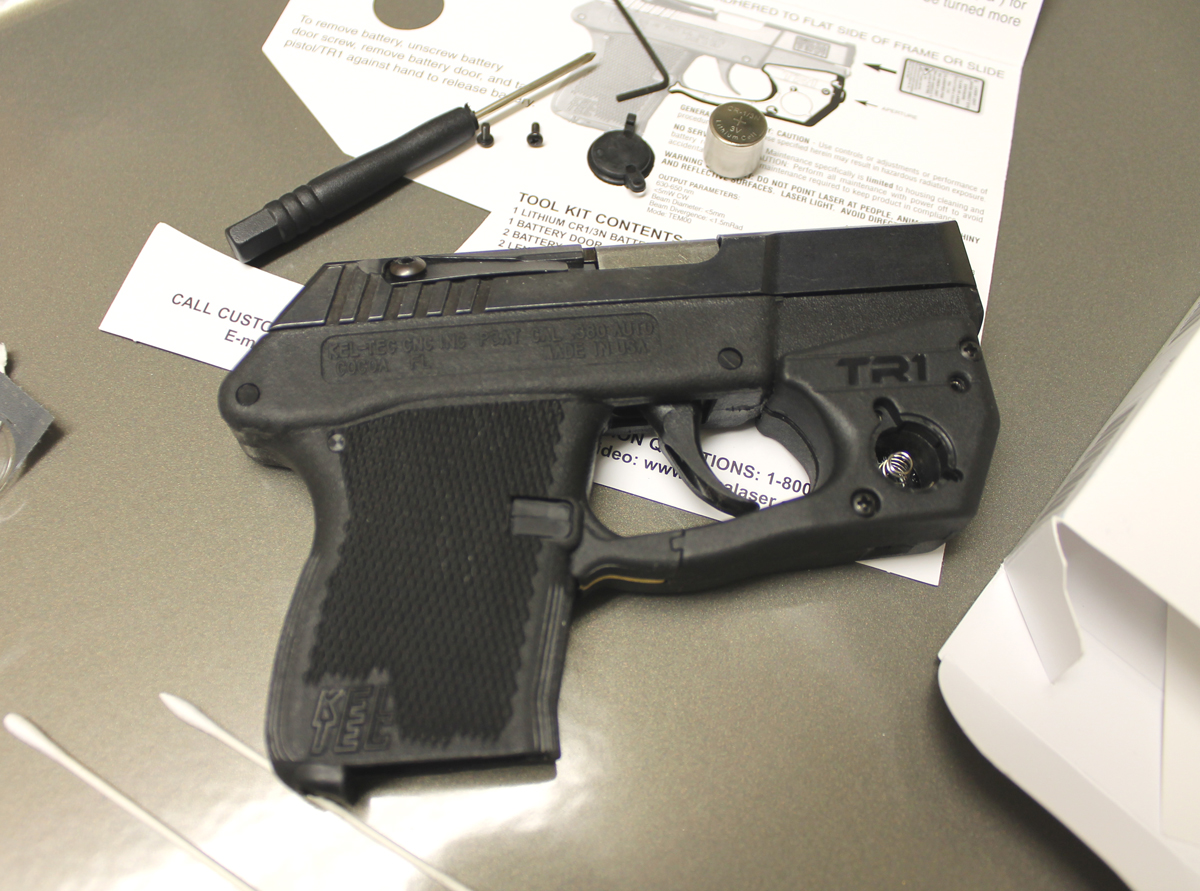 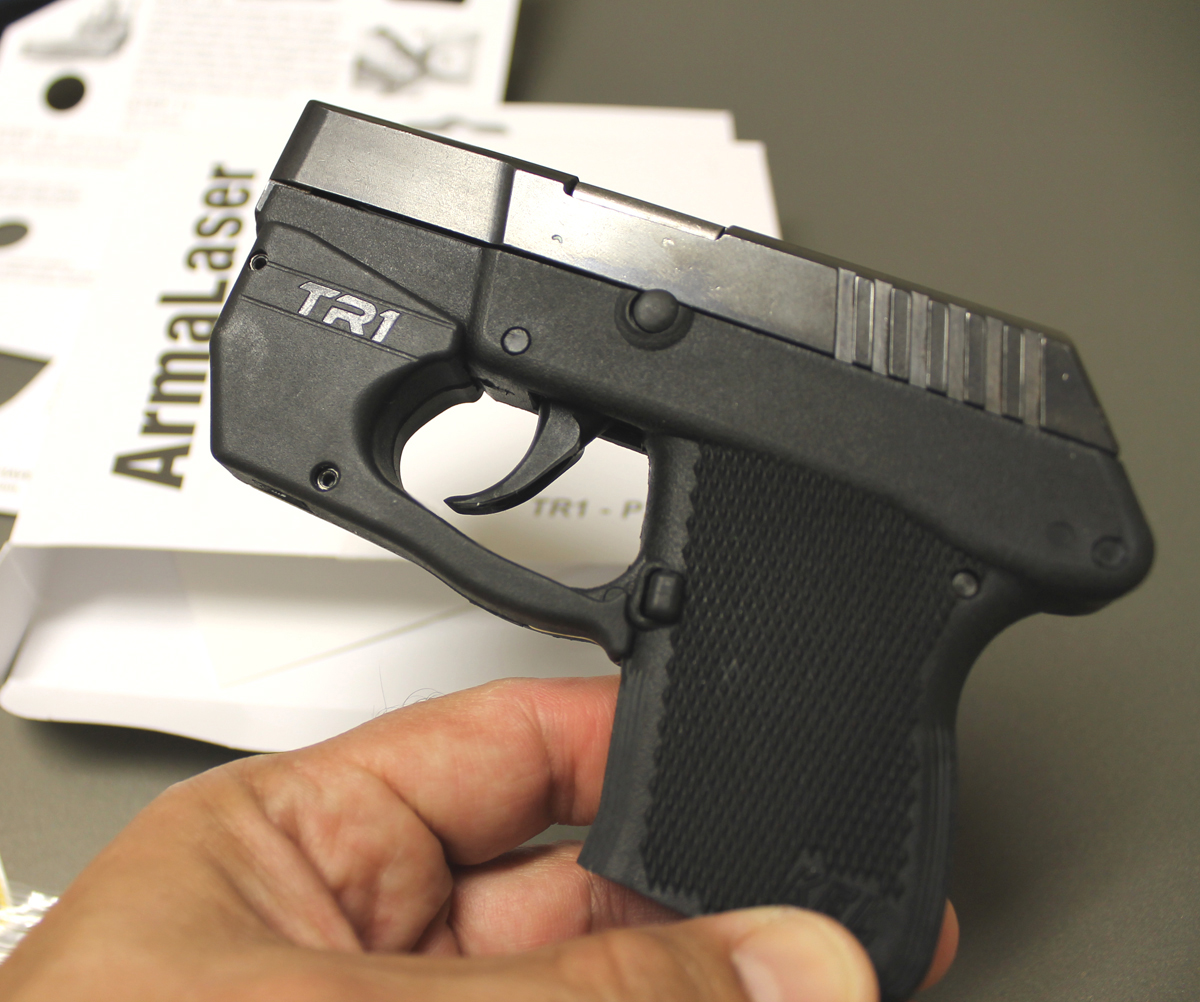 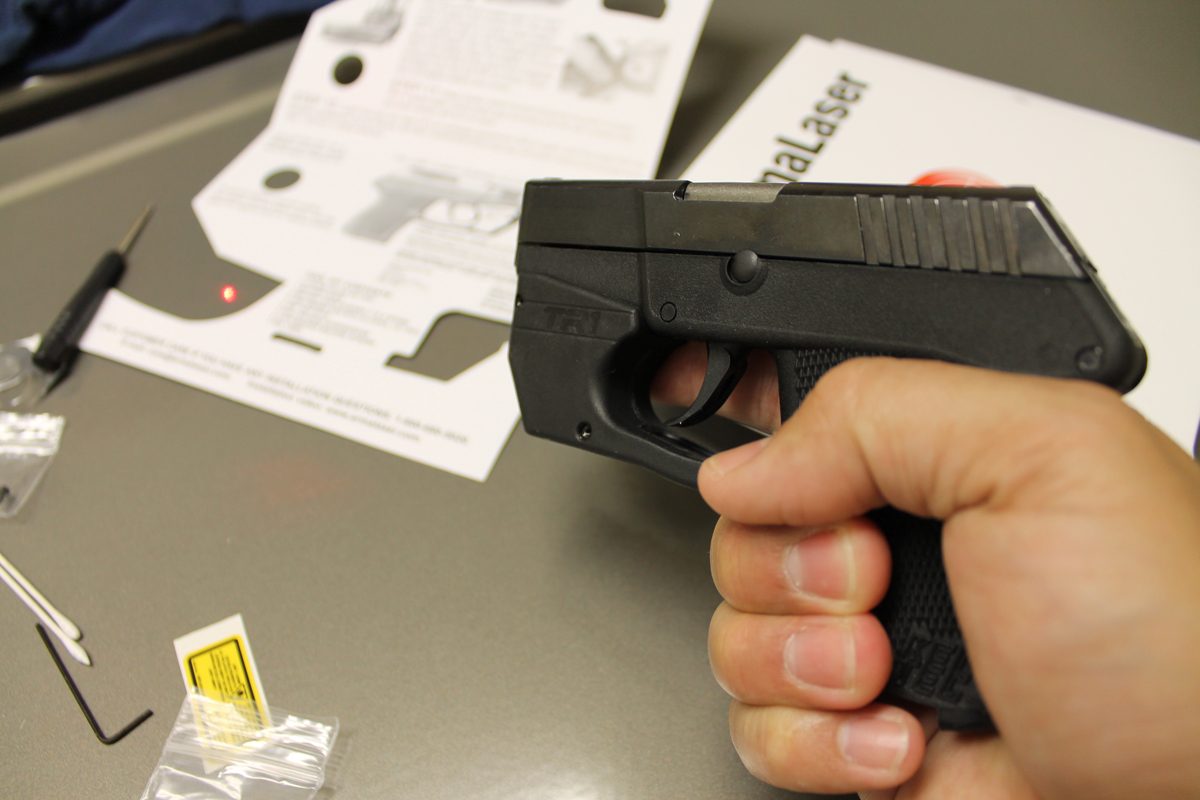 Because there is an access door on the right side of the TR1, a change of batteries will not affect the laser’s zero.  With five years of run time and a two year battery life in stand-by mode, that access door should go mostly unmolested.

On the underside of the TR1 is a master kill switch near the muzzle and the True-Touch Activation sensor at the juncture of the rear trigger guard and grip.  This conductor is a half inch strip of metal that turns the laser on when in contact with human skin.  I tried activating the laser wearing gloves and through thin cloth.   No go.  This means the TR1 will not turn on in your pocket or a holster. 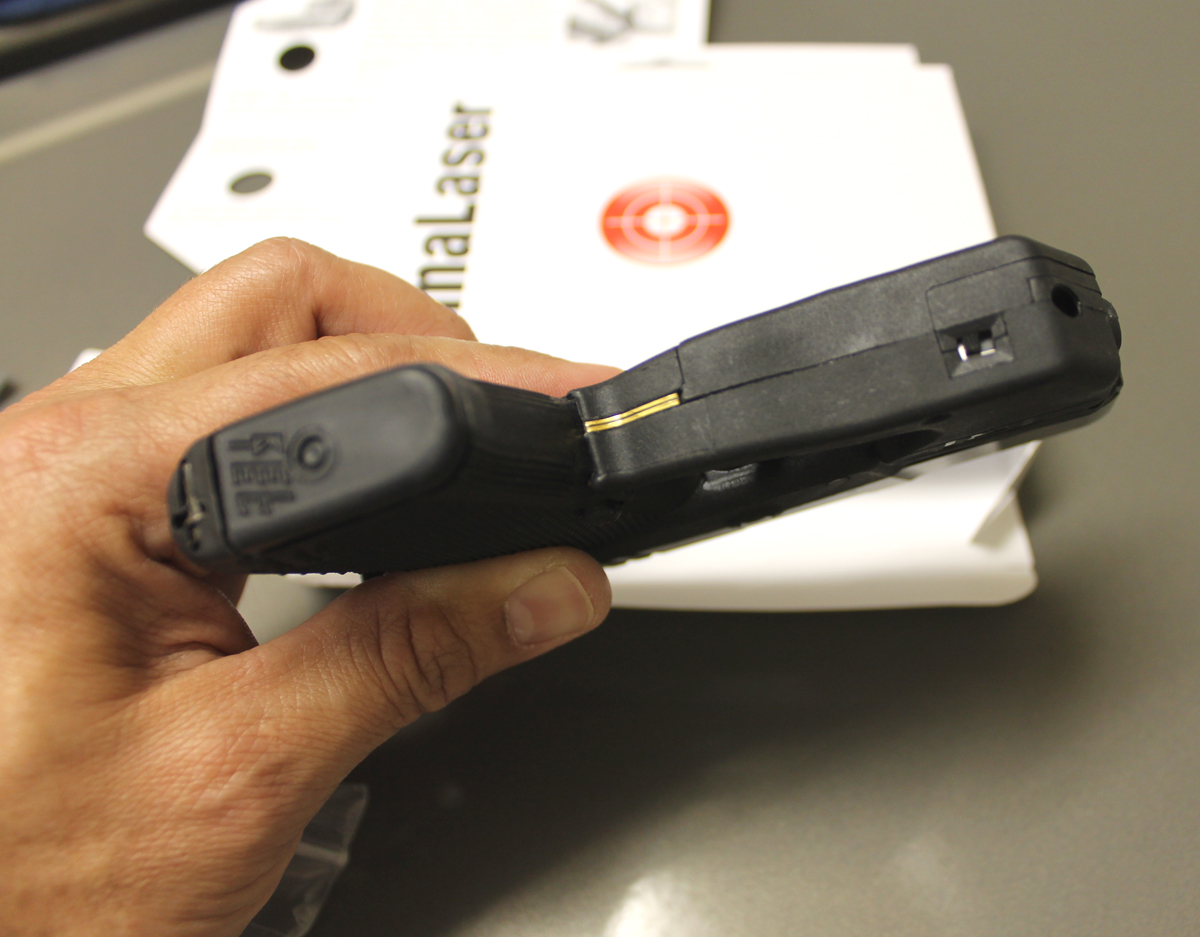 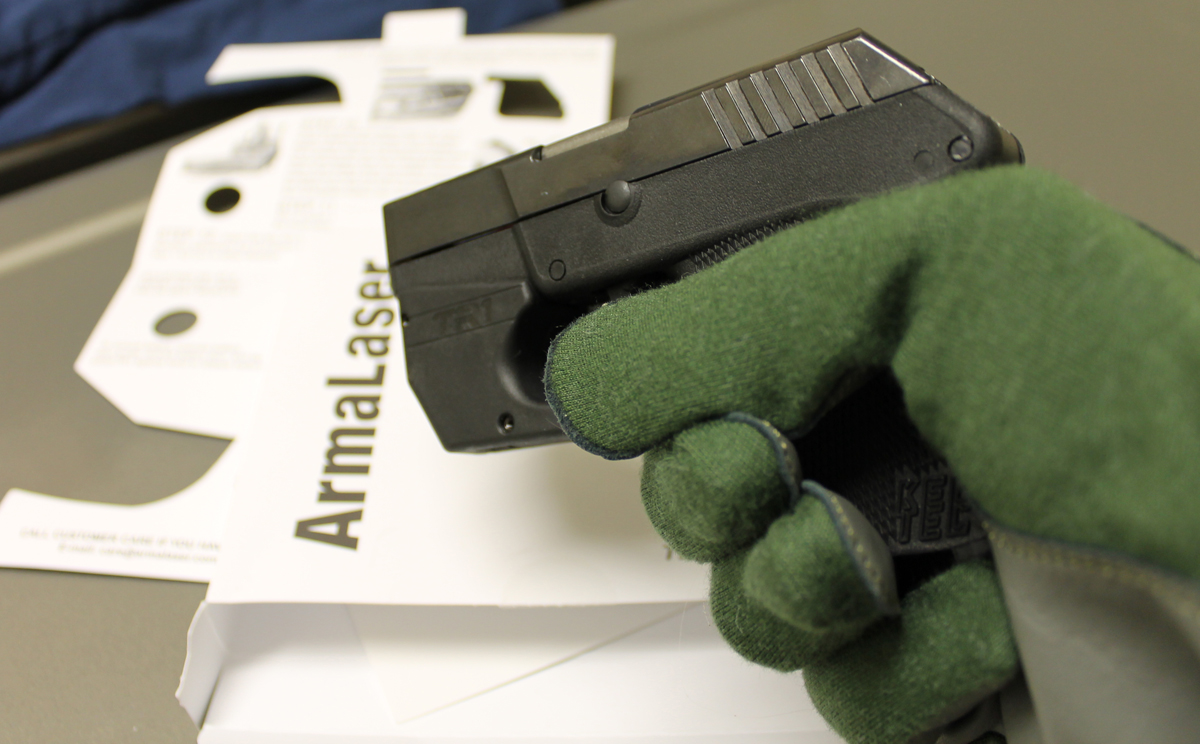 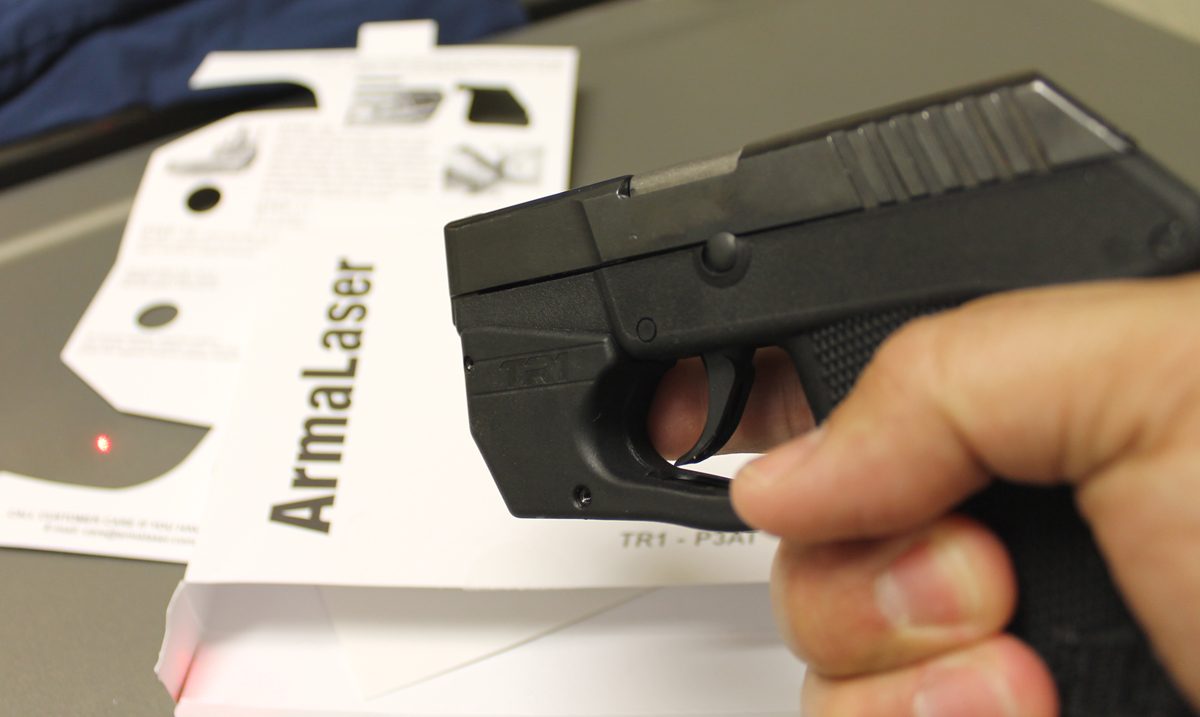 Once mounted, and after I had pointed the laser and unloaded P3AT at everything on the the downrange side of my garage, I got down to zeroing the red dot.  ArmaLaser’s instructions advise to zero the laser with the gun’s sights at 20′.  Seven yards is the vicinity in which I have adjusted my other laser sights.

I “benchrested” the gun on a table and peered down the P3AT’s sight channel and front sight bump to a fixed point on the wall 21′ away.  The TR1 laser dot was good for elevation, but I needed to move the windage right about an inch.  A scant clockwise quarter turn of the Allen key brought the dot and sight together.

My experience with a competitor’s lasers on my revolvers has shown some practical advantages to a laser sighting system.  In addition to increased accuracy, a benefit to having a laser is the user focusing squarely on the threat and not being divided between the front sight and targeted background.

The vision in my aging eyes sucks.  Up close, seeing even the front sight without reading glasses is a challenge.  With a laser sight, I can concentrate on just the bad guy.   At the range, I have found that a laser sight makes close-up combat shooting a breeze.

The original ArmaLaser Small Block was said to have a rectangular shape to lessen gun-shaped printing in one’s pocket when carried there.  Though the TR1 is on a diet, it’s overall outline on the P3AT still prints like a wallet or smart phone in your britches.   Both Kel-Tec and TR1 fit just fine in my usual Uncle Mike’s #3 pocket holster.

I have several mags of .380 through the ArmaLaser-enhanced Kel-Tec to this point.  The laser has functioned as advertised and without complaint.  I’ll add to the article after I have more range sessions with them both, but so far, the TR1 acquits itself well.

With the TR1 affixed, the P3AT has roughly the dimensions of my Smith & Wesson Bodyguard 380.   I am not enamored with the laser buttons on the Bodyguard 380.   They can be stiff to operate.  Some users modify the switches with a small piece of plastic (a section of Q-Tip stick) under the grey buttons.   No such issue with the ArmaLaser. 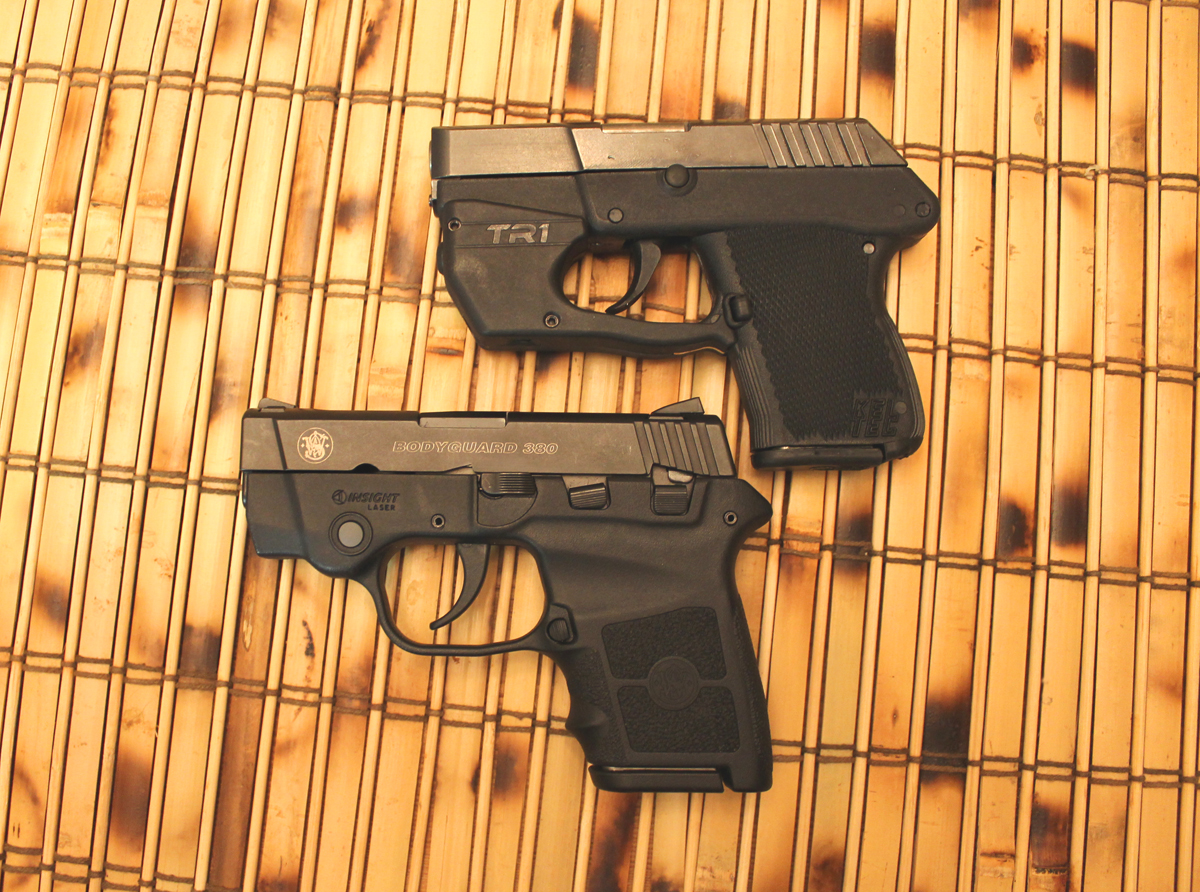 The TR1 can throw the laser in either a constant beam or in a pulse mode.   It is said the pulsing laser is easier for the eye to pick up, presumably because our eyes detect motion well.  Though it can be configured to pulse, I’m fine with my TR1 on a constant beam.

Plans appear to be in the works for an expansion of the TR series of Touch-Reflex laser sights from ArmaLaser.  I would imagine ones for the Ruger LCP, Glocks, and Kahrs are under development, as ArmaLaser makes Small Block models for those guns.

As I said, I picked up my TR1 for $99.00 from a retailer.  ArmaLaser sells the TR1 and a DeSantis Nemesis pocket holster as a package for $119.00 in their on-line store.  I think both are great deals.

The ArmaLaser TR1 has some very innovative features for the low price.  While I’m not willing to drop my P3AT on the concrete floor a hundred times, I am confident the TR1 will survive any of the abuse I will inflict upon it.

When the Kel-Tec hits the concrete on the first drop, I always utter an “Oh, shit!”  It’s the sound it makes…