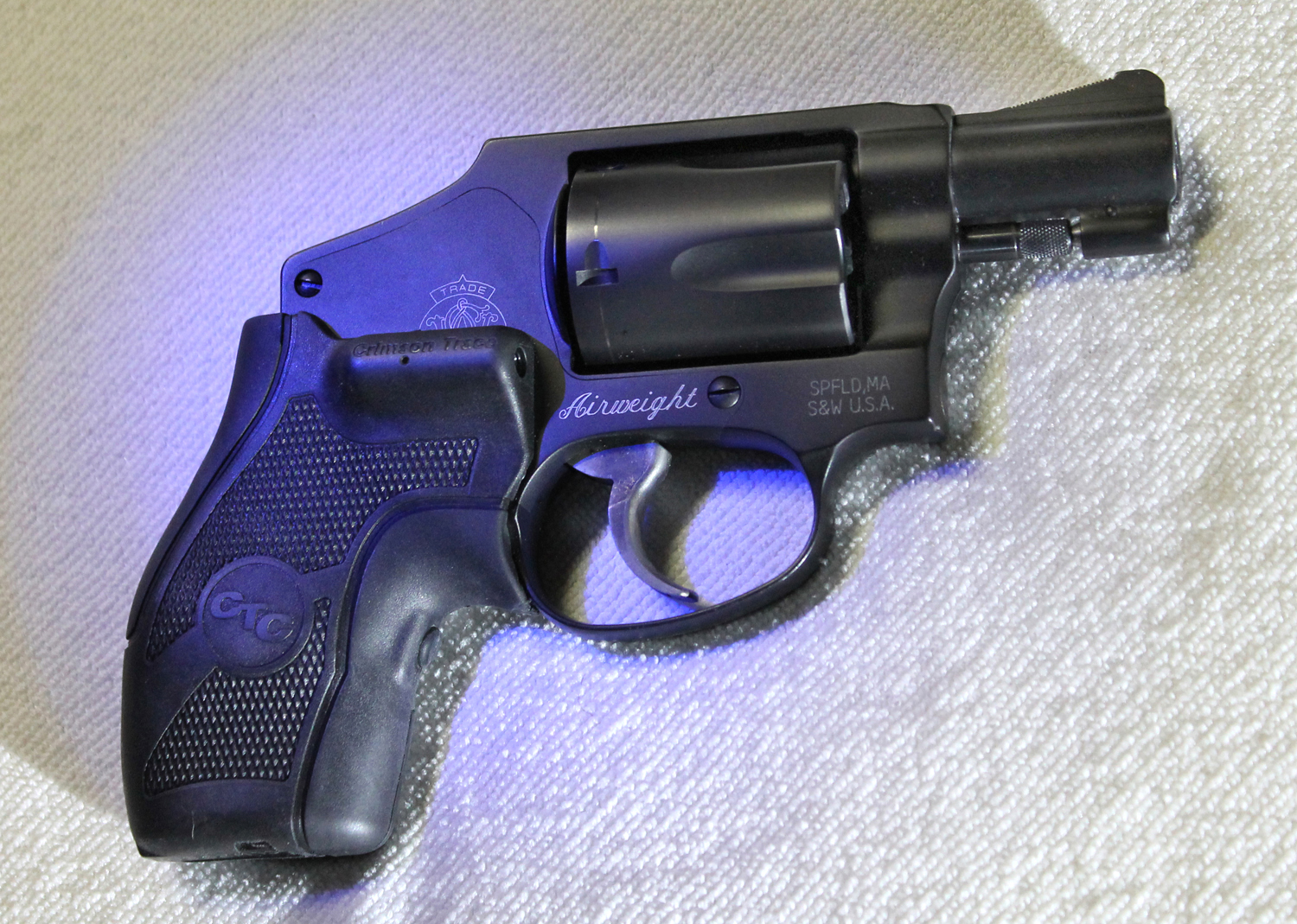 Most cops are not gun guys or gals.  I know from talking to them.  I was showing my unloaded Smith & Wesson 442 Centennial Airweight back-up gun to a co-worker, when a few others happened into the office.

I run Crimson Trace Lasergrips on my Smith & Wesson J-frame revolvers.  My choice is the LG-405, which has slightly shorted hind quarters when compared to the longer gripped LG-305.  The smaller butt on the 405 gives better concealment for my needs, on and off duty, but I still find plenty of grip in the hand.

The frame of the LG-405 is polymer.  It houses the laser diode, battery, and switch.  There are rubber overmolds on the front and back strap of the Lasergrip.  They add a tackiness to the handle.  I find the back-strap overmold is nicely flared out to provide extra cushioning against a J-frame’s sometimes brisk recoil.

From a shooting stand-point, the LG-405 has a front activated laser that comes on when you grip the revolver.  Slightly loosening your middle finger’s tension can allow for the laser to deactivate if you want it off momentarily .

About aiming:  The laser is mounted about 1 1/2″ below and 3 3 /4″ behind the muzzle of a J-frame.  Its positioning means that the laser’s beam and the bullet’s trajectory are slightly offset.  This will affect adjusting the laser and, ultimately, shooting with it.

I calibrate my LG-405 to the revolver’s sights at 7 yards, in other words, both mechanical and laser points of aim converge at this distance.  Crimson Trace Lasergrips come with a tiny hex wrench to adjust the elevation and windage set screws on the laser’s housing.  I benchrest my gun and in small increments match the laser dot to the gun’s sight picture. 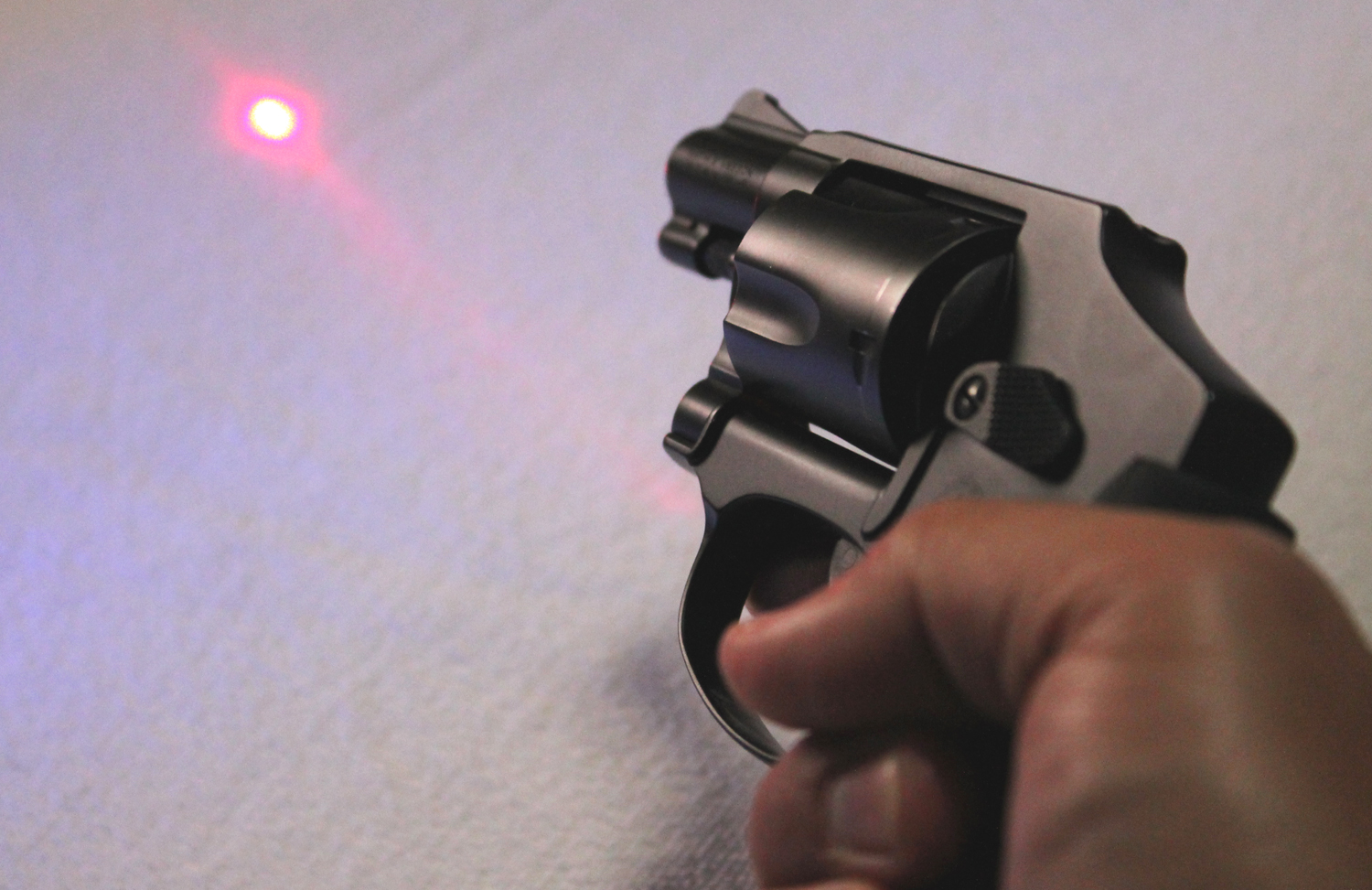 To use the laser accurately you must know the laser point’s offset.  When aiming the laser, you will probably not be finding the revolver’s front sight, since the bright red dot is your general point of impact on the target.  I say “general” because distance to target dictates exactly where the bullet lands compared to the laser dot.

For instance, at muzzle contact range the laser dot is about 1 1/2″ low and at about 5 o’clock in relation to the bullet impact.  All the way out at 7 yards, laser dot and bullet’s point of impact match.  At fifteen yards, to my eye, the laser dot is almost 2″ high and just left of where I want to hit.

Okay, that’s all fun, but what does it mean as I watch the red light dance across the target?  It says to me that a contact shot will be an inch and a half high and left of my laser.  At fifteen yards, my shot will hit just low and right.  The bottom line is that when the hammer drops, your bullet will be within a 2″ radius of the dot as long as your bad guy is closer than 45 feet…  No worries, back to business. 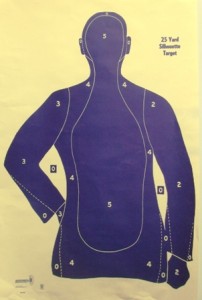 In our off-duty and secondary weapon qualifications, we  shoot 48 bullets inside the 5-score “coke bottle” of a blue B-21-E target at distances from 1 to 15 yards.  For the 15 yard shots, I tend to use the iron sights and momentarily disregard the laser.  At that distance, the long double action trigger pull of an Airweight and the jumpy laser dot conspire to pull a shot or two astray (for me).

Inside 15 yards, the LG-405’s shine.  Point-shooting the laser dot leads to fast target acquisition and accurate hits.  I like that at close range you are concentrating solely on the suspect because he’s wearing the sight picture.

Crimson Trace products are Made in the USA.  They are an industry leader for good reason.  My LG-405’s have worked flawlessly through thousands of fired rounds and thousands of miles of on-the-body carry.  Bullet placement is critical in defending oneself with a revolver.  I think the Lasergrip gives me an edge.