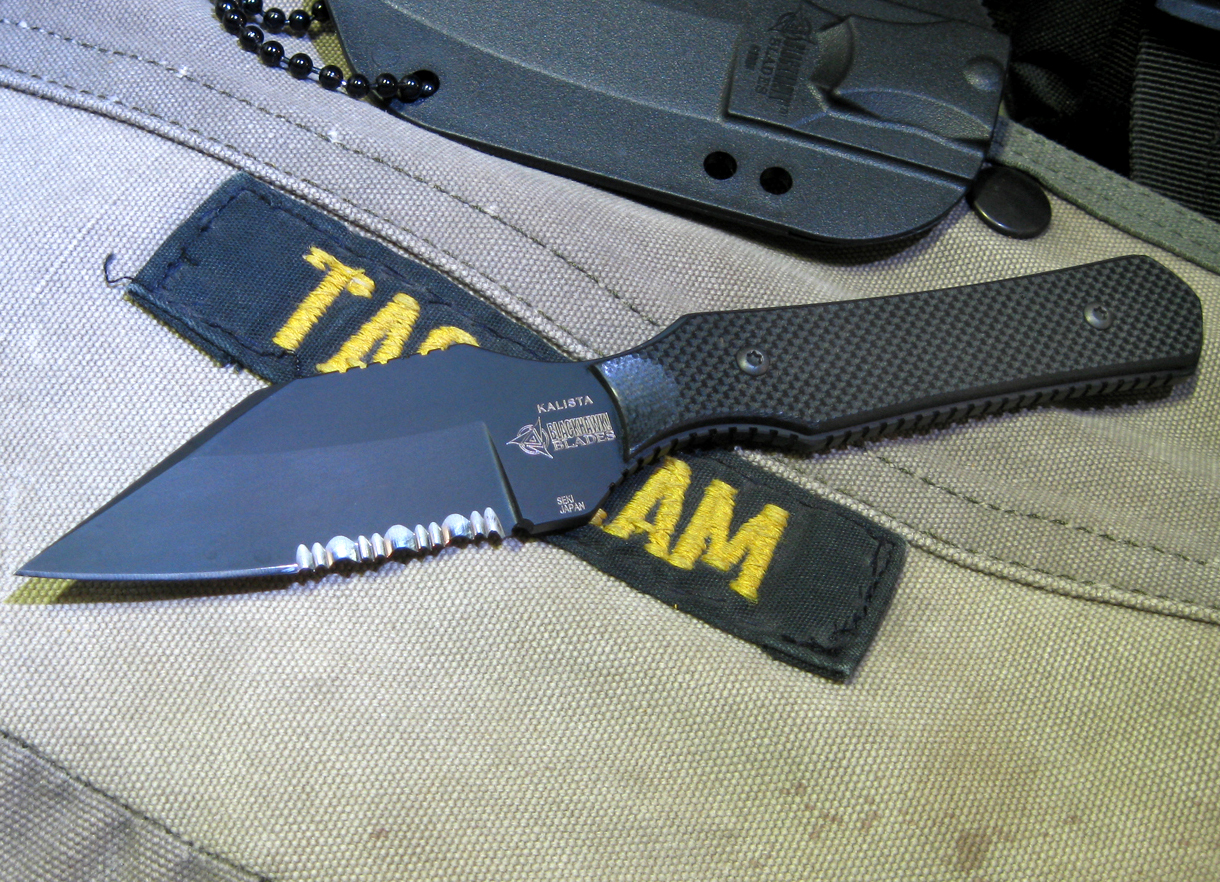 Back when he was working for Blackhawk! Products Group, Michael Janich designed a number of tactical knives such as the Be-Wharned, Tatang, and the Kalista.  Janich left Blackhawk! in late 2009 to become Spyderco’s Special Projects Manager.

Janich brings a vast amount of expertise to the personal defense game, and this is especially true in knife combatives.  His grasp of blade training and implementation seems to directly influence the construction and dimensions of his knife designs.  Further, Janich’s base of knowledge affects the performance of his knives in the hand.

One of Janich’s contributions to Blackhawk!’s fixed blade line-up is the Kalista.  Roughly, a Kalista would be a practitioner of the Philippine martial art of Kali.  Much of the economy of motion in Janich’s Martial Blade Concepts derives from Filipino Escrima, Arnis, and Kali.

I purchased a Blackhawk! Kalista in its original run.  I really like its attributes.  The knife handle works well in a hammer, saber, Filipino, and reverse grip (edge in or out).  There are unique grooves on the ventral surface of the tang for indexing, letting you know the knife’s orientation in your hand, either sharp side down or up.  The grooves also enhance your grip. 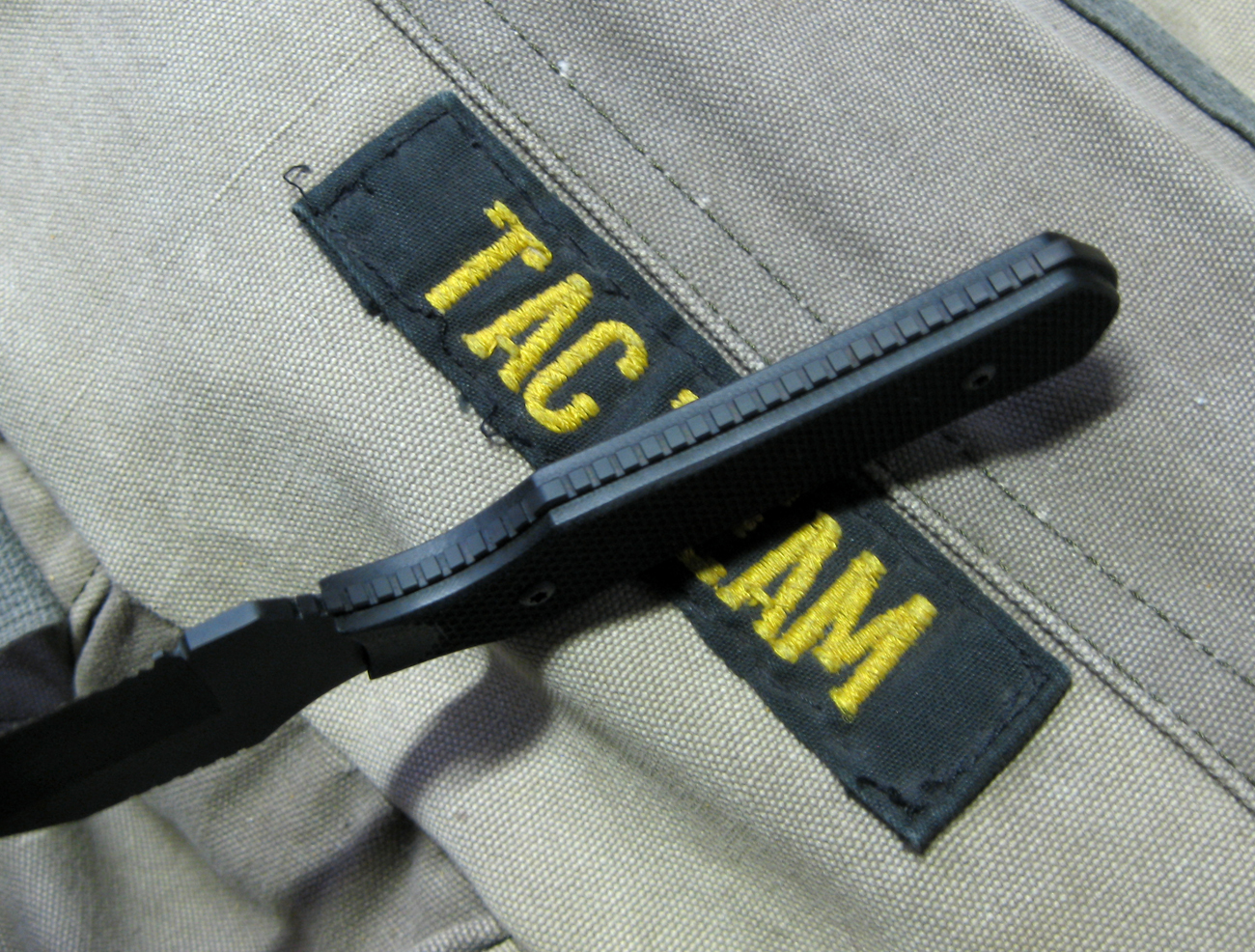 Another feature of the handle is the offset scalloping.  The lower scallop is set farther back than upper one, which helps you intuitively know the edge’s orientation.  The upper scallop provides a thumb rest in the traditional saber grip.

Speaking of thumb rests, the Kalista’s blade provides jimping on the rear third of its topline for one’s opposable digit.  A Filipino grip places the wielder’s thumb very far forward for stability and power during slashing.  Slightly rounded, the pommel provides not just a striking surface, but allows for comfortable thumb placement in reverse grip action. 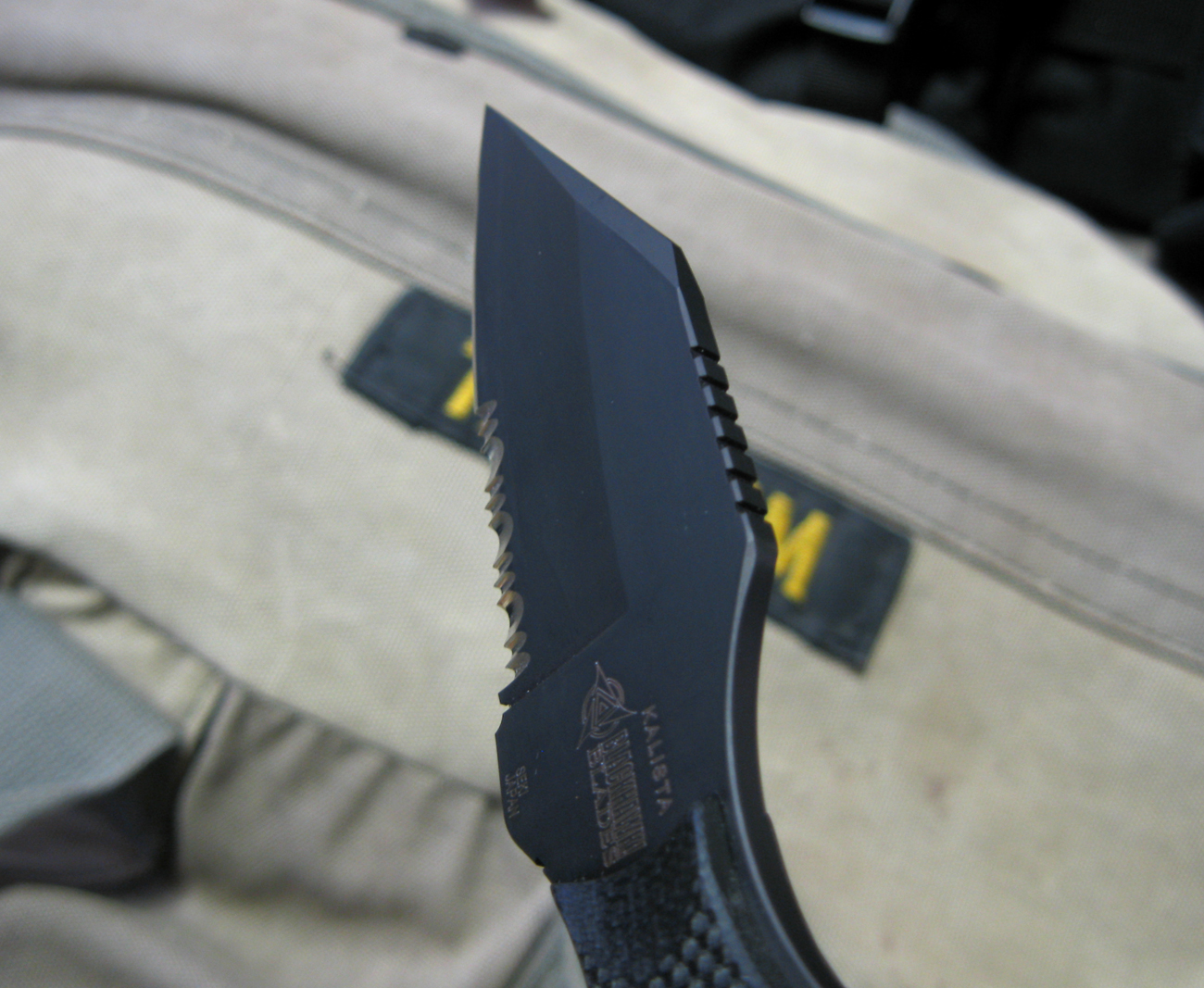 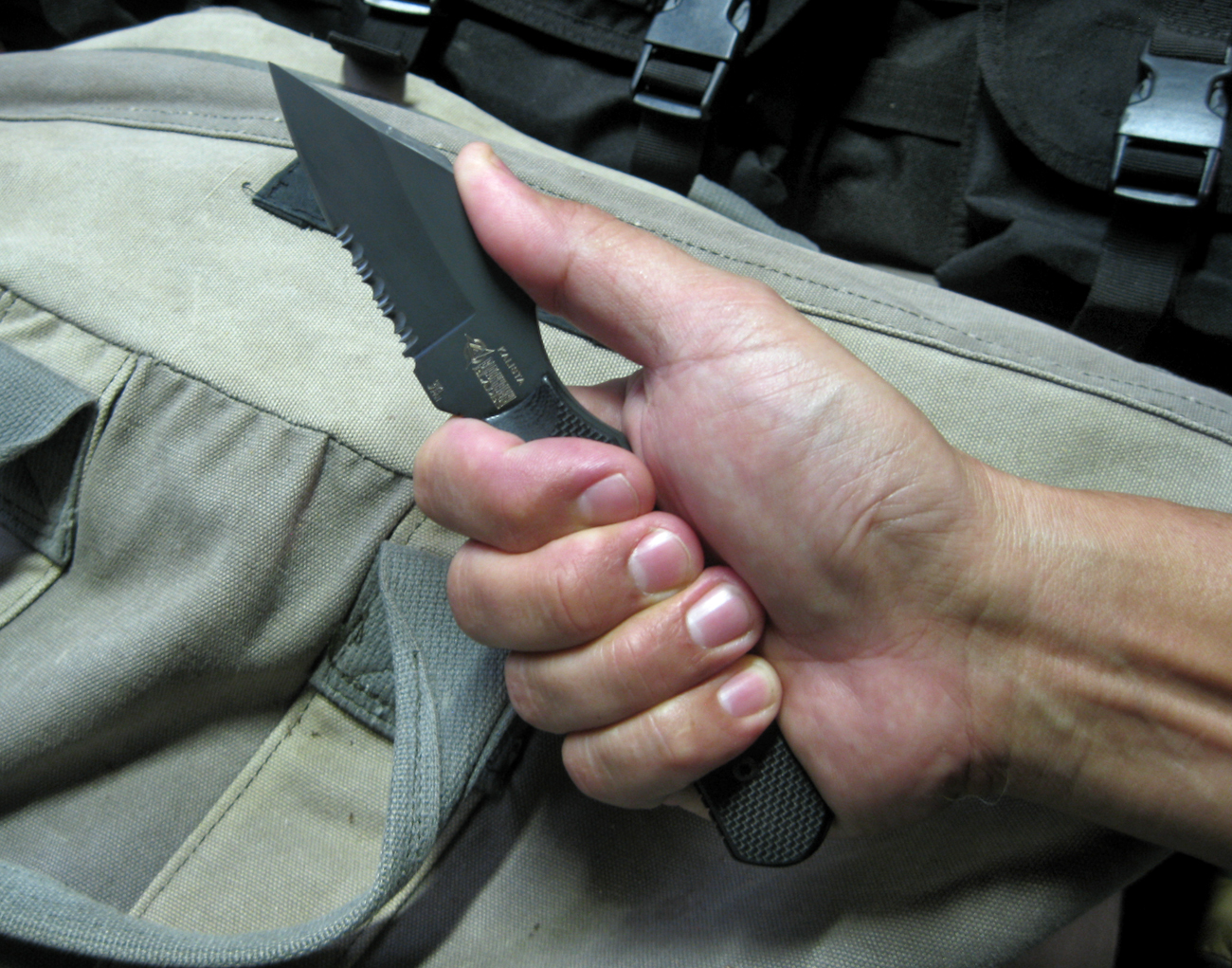 Textured G-10 scales are bolted to the full tang.  There are no lanyard holes or posts or studs.  That doesn’t confront me.  This knife is purpose-built for concealed carry back-up, so it needs no paracord accoutrement.  I’ll reserve the 550 for my dive or outdoors knife.

The Kalista’s blade profile is a modified Wharncliffe.  This places the point low for thrusts.  Its grind is a high hollow, with several degrees of belly.  Edge length is 3.3 inches, which may be short for general combat, but is plenty for CCW and Filipino arts’ surgical arterial, muscle, and tendon cuts.

The Kalista is carried via the Blackhawk! Total Concealed Carry System.  The TCCS allows for over 70 ways to carry, including neck chain, paddle, boot, IWB, belt, and other methods that secure the knife.  Hardware and instructions come in the box. 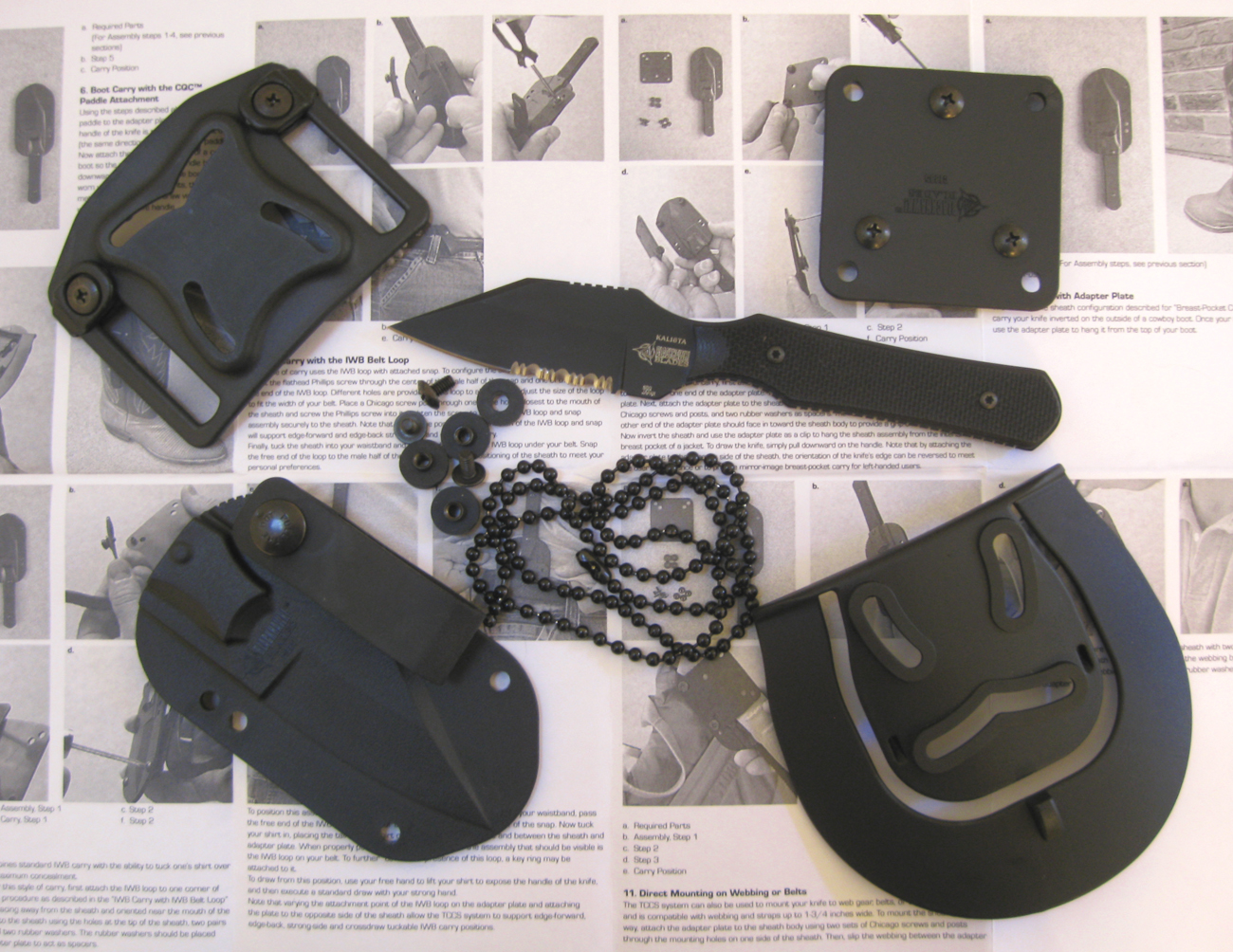 Now, about the Kalista types.  The original Kalista was made in Seki City, Japanese knifecraft mecca.  The first run was in ATS-34 and the second in VG-10.  Both blades were coated in black Titanium Nitride.  Current Taiwanese production models are made in AUS8A and are black PVD coated.  The TCCS is unchanged. 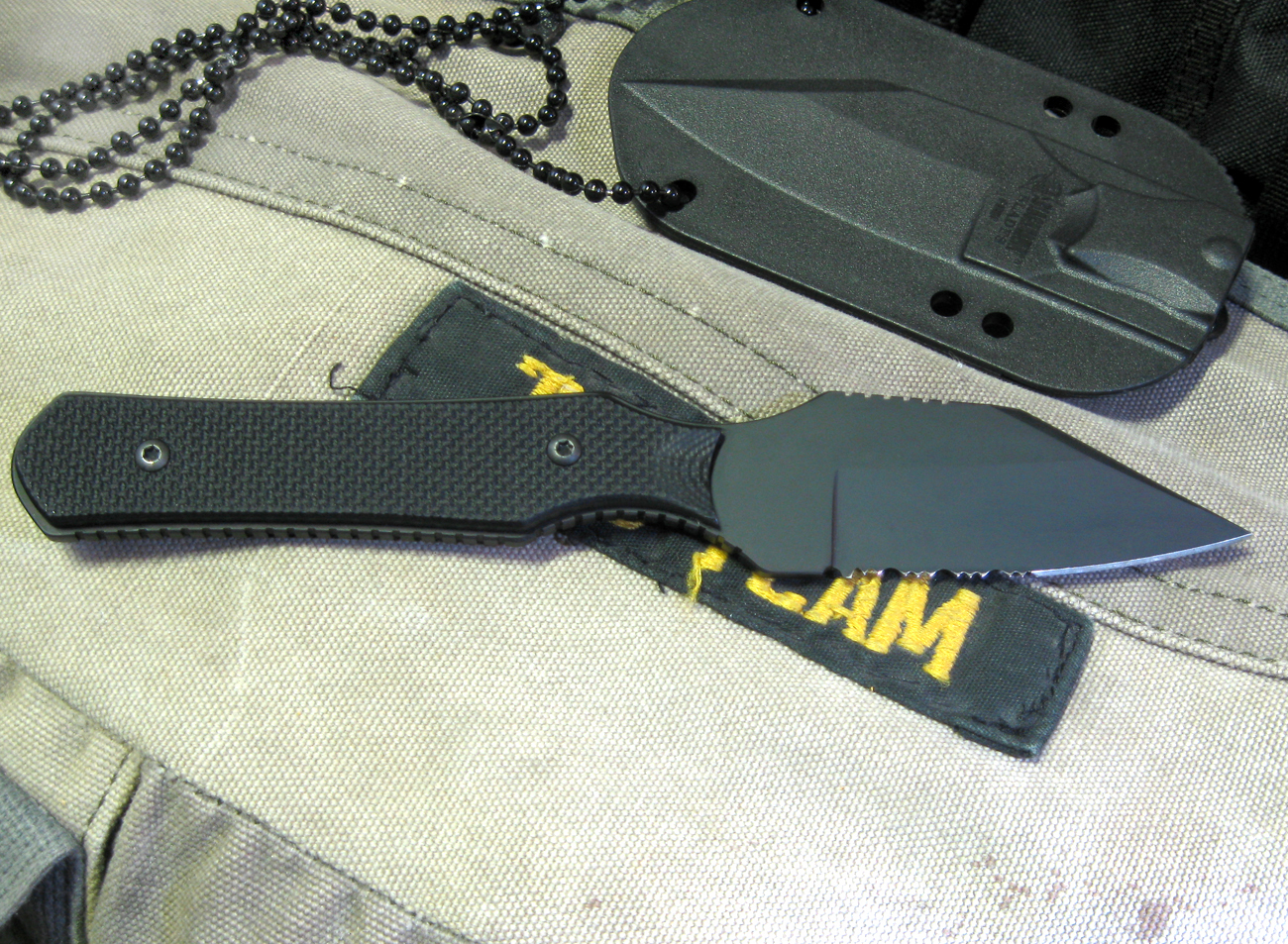 In a defensive knife, the differences in production are negligible.  I do not use my protection blade to slice hemp rope or chop wood.  Keep your defensive knife sharp by saving it for the bad guy.

Blackhawk!’s manufacturing changes lowered the Kalista II’s price point to under a hundred dollars, which is 20% less than I paid for first run.  This is important for a business selling knives to cost conscious cops, soldiers, and CCW holders.  For its intended purpose, I think the Blackhawk! Kalista is an over-achiever.