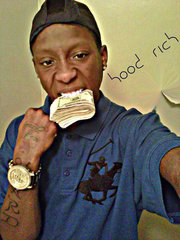 Yesterday, Nicholas Lindsey was found guilty of first degree murder in the killing of St. Petersburg Police Officer David Crawford.  At 17 years of age, Lindsey was sentenced to life in prison without the possibility of parole.

The defense attempted to portray Lindsey, who was tried as an adult for the February 21, 2011 murder, as a “scared child” who accidentally shot Crawford.  Five times.  Jurors did not believe the rhetoric.

Ofc. David Crawford’s widow, who was harassed in the 6th Judicial Circuit Criminal Courts Complex by Lindsey supporters, had no sympathy as she read her statement to the Court:

“My name is Donna Crawford. I am the wife of Officer David Crawford.

To you the animal that sits before me, and I use this term very loosely, you claim to be this scared little boy who comes from the rough streets of south St. Pete and a community that failed you. But let me tell you, I come from the same streets of south St. Pete, a low income family and without many opportunities available to others. But unlike you I didn’t carry a gun, shoot and kill another human being nor blame anyone else for my choices and actions.

You sit in this courtroom that is supposed to deliver justice, but to me justice would be for me to do to you physically what you did to my husband.

So the more you complain, scared little boy, be very afraid, because you’re going to prison where people are tortured, raped and yes, lose their life and this time mommy and daddy cannot run to your aid and help you. So I want you to know when these things happen to you it will still fall very short of the pain I feel every day for what you have taken from me.

You are not worth remembering anymore after I walk out of this courtroom today, except the day I get to read your obituary and then maybe, maybe I will find peace within this nightmare I relive every day. Thank you.”

Lindsey’s defense team conceded in opening statements that Lindsey shot and killed Ofc. Crawford when he stopped Lindsey on a burglary call, but they argued that Lindsey’s .380 caliber pistol accidentally went off and shot Crawford once.  Further, when Lindsey saw Ofc. Crawford drawing his gun, Lindsey panicked and shot four more times in self defense.  All five bullets hit Crawford in the torso.

The prosecution proved beyond a reasonable doubt that Lindsey killed Crawford with premeditation, as he ambushed Crawford on the street then ran from the scene as Ofc. Crawford died, according to eyewitnesses.

The men and women of the St. Petersburg Police Department were already shell-shocked at Ofc. Crawford’s killing, as it was only 28 days before that they had lost Sgt. Tom Baitinger and K9 Ofc. Jeff Yaslowitz, who had been murdered by Hydra Lacy, Jr. in a warrant service gun battle.

The St. Petersburg Police Department, 6th District Medical Examiner’s Office, and the 6th Judicial Circuit State Attorney’s Office did an outstanding job of presenting this case to the jury.  Had Lindsey been an adult at the time of the murder, he would have faced the death penalty.

One Response to St. Petersburg Officer’s Killer Gets Life Sentence