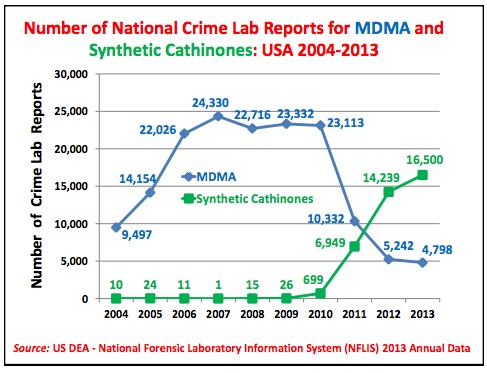 South Florida is experiencing a spike in violent and unpredictable behaviors exhibited by people using the relatively new synthetic designer drug known as flakka.  A “bath salt”-style mixture, flakka can be smoked, vaped, snorted, injected, or swallowed.  It is classified as a synthetic cathinone under the chemical name alpha-pyrrolidinopentiophenone, or alpha-PVP.

Flakka, known as “gravel” in other parts of the country because of its coarse crystalline appearance, is highly addictive and can cause dangerous psychotic episodes.  It costs about one quarter that of methamphetamine, but seems to have worse short term effects on its users.

Since the beginning of this year, a naked and armed flakka user held police at bay from a rooftop; another one desperately tried to kick in the doors of the Ft. Lauderdale Police Department because he was severely paranoid; a third attempted to scale the fence at FLPD to escape “killers” but became impaled; and, finally, a man high on flakka seriously battered an elderly woman in her home but did not remember the attack.

The Broward County Sheriff’s Office lab had over one hundred positive test results for alpha-PVP substances in the last two months.  Flakka is produced in China, India, and Pakistan and can be purchased through the Internet.  Like other bath salts and spice, alpha-PVP is an illegal substance in Florida.

In addition to the negative psychological effects, flakka users can suffer excited delirium symptoms such as hyperthermia and rhabdomyolysis, leading to possible kidney failure.  Post-custody observation and medical attention for flakka users is warranted.

Flakka is made from the khat plant, which is indigenous to Asia and Africa.  Its leaves are chewed by locals for an intoxicating sensation.  It is uncertain from where the name flakka came.  A Spanish language translation for la flaca is the skinny girl.

The surge in flakka use has come at a time when cases of other synthetic drugs, such as MDMA, have declined.  No correlation is known, however.  There has been a marked decrease in spice and bath salt abuse in my area over the last two years.  Let’s hope that enforcement and education will keep violent flakka incidents to a minimum.

This entry was posted in Medical, Officer Safety. Bookmark the permalink.