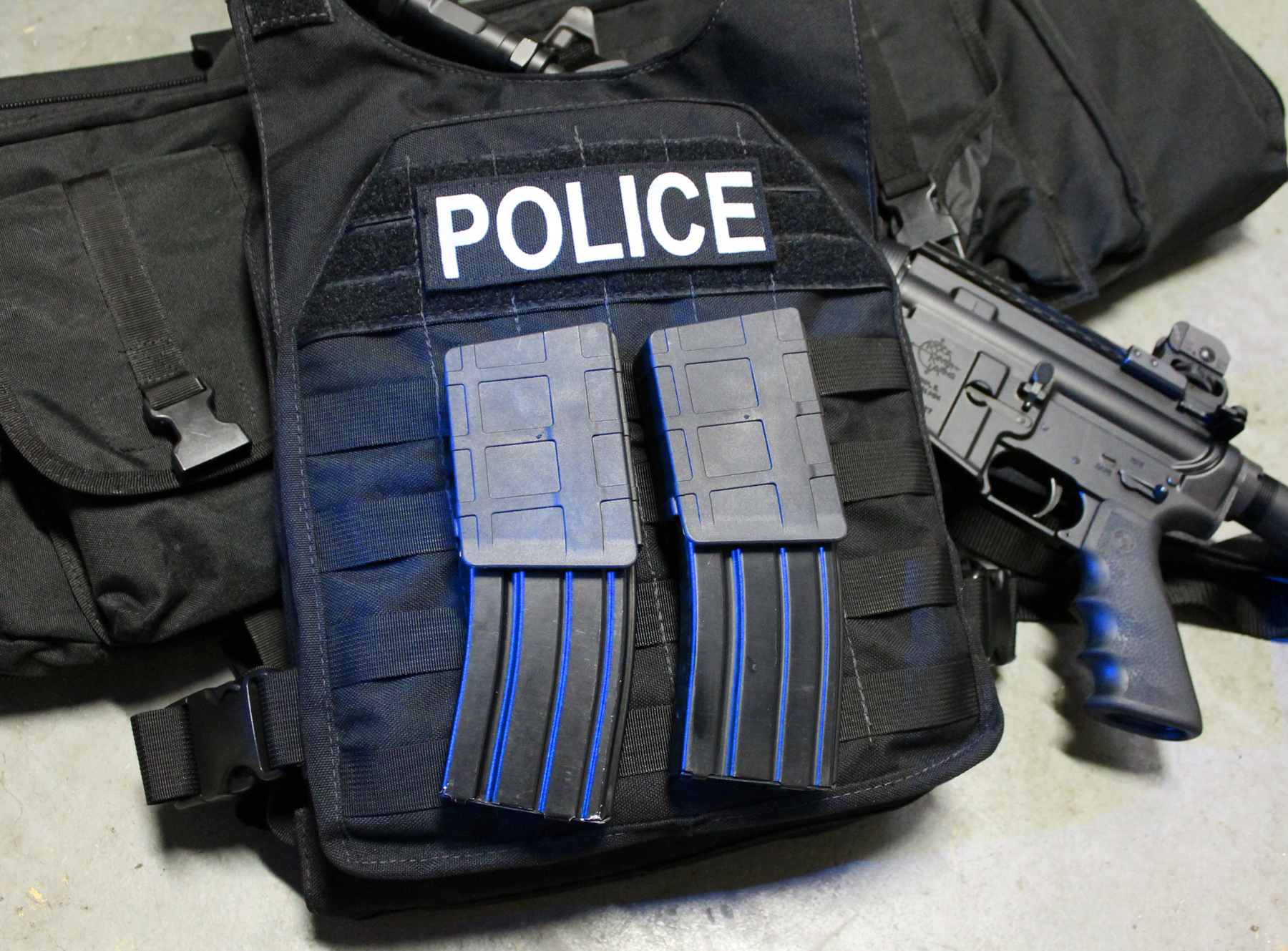 When I cruise the vendors’ displays at SWAT Round-Up International, I look for new products.  About three-quarters of the way down the north aisle, I saw something that made me pause:  an AR-15 mag pouch that had the magazine…upside down.  Well, I had to stop and chat with the folks at Gear4Grunts.com.

CEO Doug Mullen is the inventor of the RAMP, or Rapid Access Magazine Pod.  Doug’s military experience and work as a civilian defense contractor led him to ask, “Why are we still carrying rifle magazines the same way we did in WWI?”  In examining the ergonomics of a magazine change, Doug figured out something innovative.

The patent pending RAMP 5.56 orients the magazine in the same way it goes into the gun, bullets up.  During a mag change with the RAMP, the soldier or officer makes just two motions.  Down to pull the mag out and Up to insert into the mag well.  Pretty slick.

If you think about current magazine pouch configurations, whether nylon, Kydex, or polymer, the magazine is carried so that you have to retrieve the magazine up, rotate and reorient it, and then seat it in the gun.  The most time consuming part of a mag change is in manipulating the magazine.

An immediate advantage to the RAMP is that you get a solid grip on the magazine when you retrieve it and that grip does not change as you re-up the gun.  It is obviously more secure and intuitive.  It kind of reminds me of a mag change with coupled magazines.  Mag off, mag on. 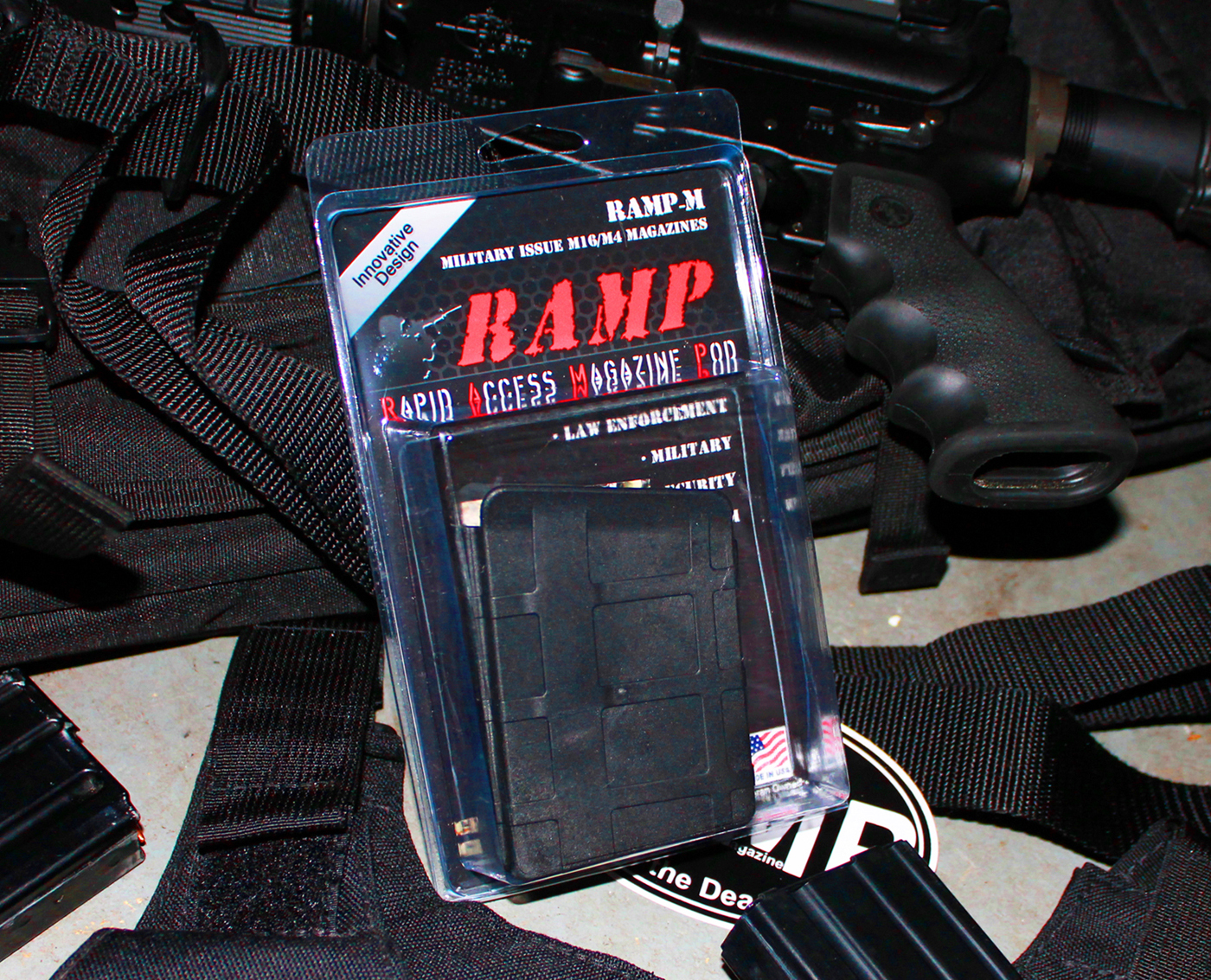 Normally a conventional magazine pouch has some sort of other retention like a flap or shock cord.  The RAMP does not need one.  Its retention is cleverly achieved with a physical property of the magazine itself.  Doug schemed that the detent slot that holds the magazine fast in an AR or M4 can also be used to hold the mag securely in the RAMP by the use of a molded-in tab.  I can attest that it works.

Since the entire RAMP is made of a proprietary polymer, I asked Doug if they had tested it for repetitive insertions and removals of a magazine, you know, like 10,000 cycles or something.  He surprised me by saying that’s exactly what they had done.  A machine was constructed to run magazines in and out of the RAMP for—10,000 repetitions!  Proving its durability, the RAMP passed the trials with both metal and plastic mags.

Yeah, what about heat and cold?  Polymers change their rigidity in varying temperatures, which would affect magazine retention.  Doug replied that he had RAMPs deployed with the U.S. Army’s 10th Mountain Division in the cold and in Afghanistan where it’s hot.  He said the soldiers reported that the RAMPs worked just fine in either climate.  Okay, then.

I bought two flat black RAMPs from Doug.  I had my eye squarely on mounting them to my BDS plate carrier, which is my stripped-down patrol holy-sh*t-it-has hit-the-fan! rig.  The RAMPs went on easily but will not come off so.  The MOLLE attachments work perfectly. 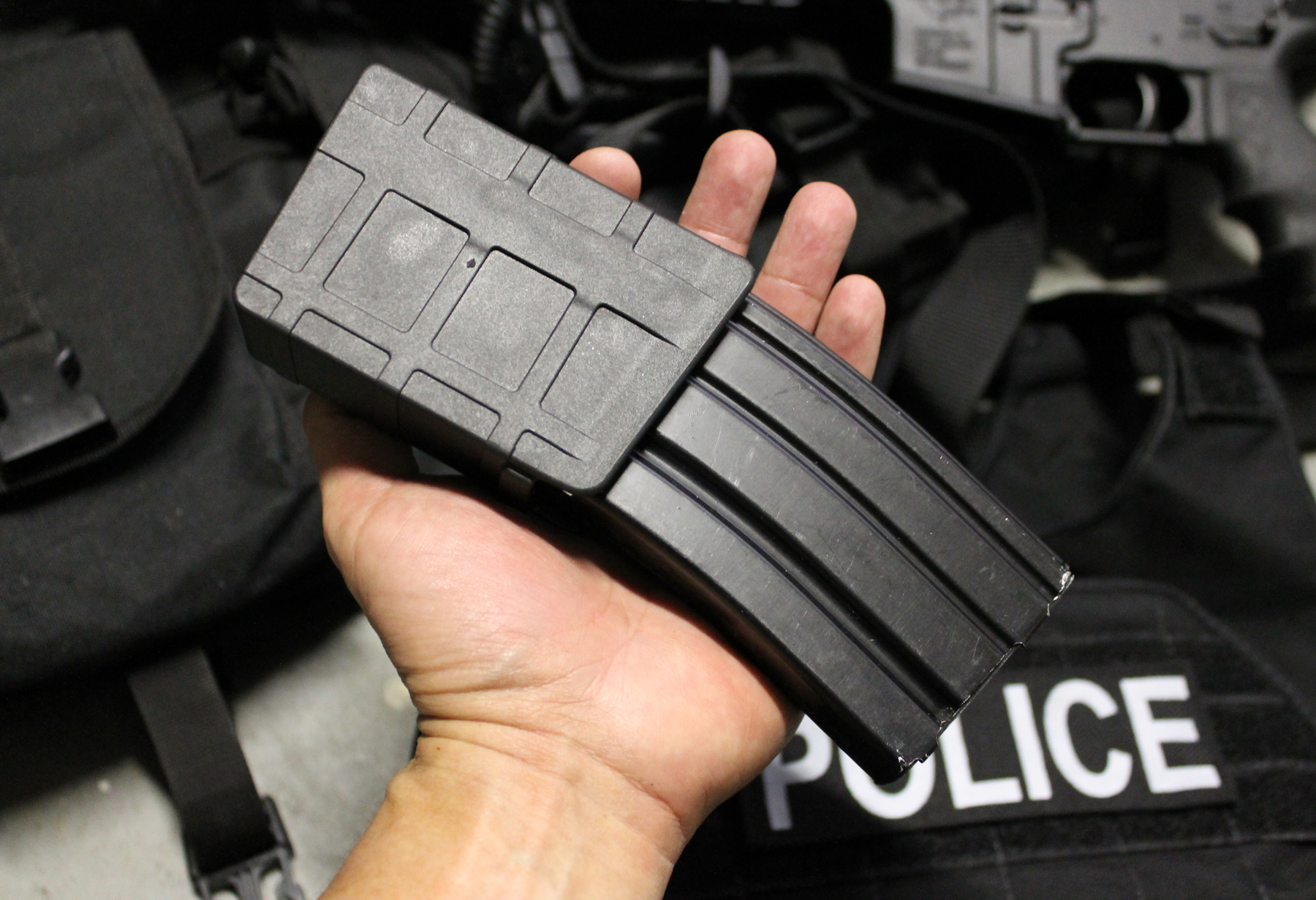 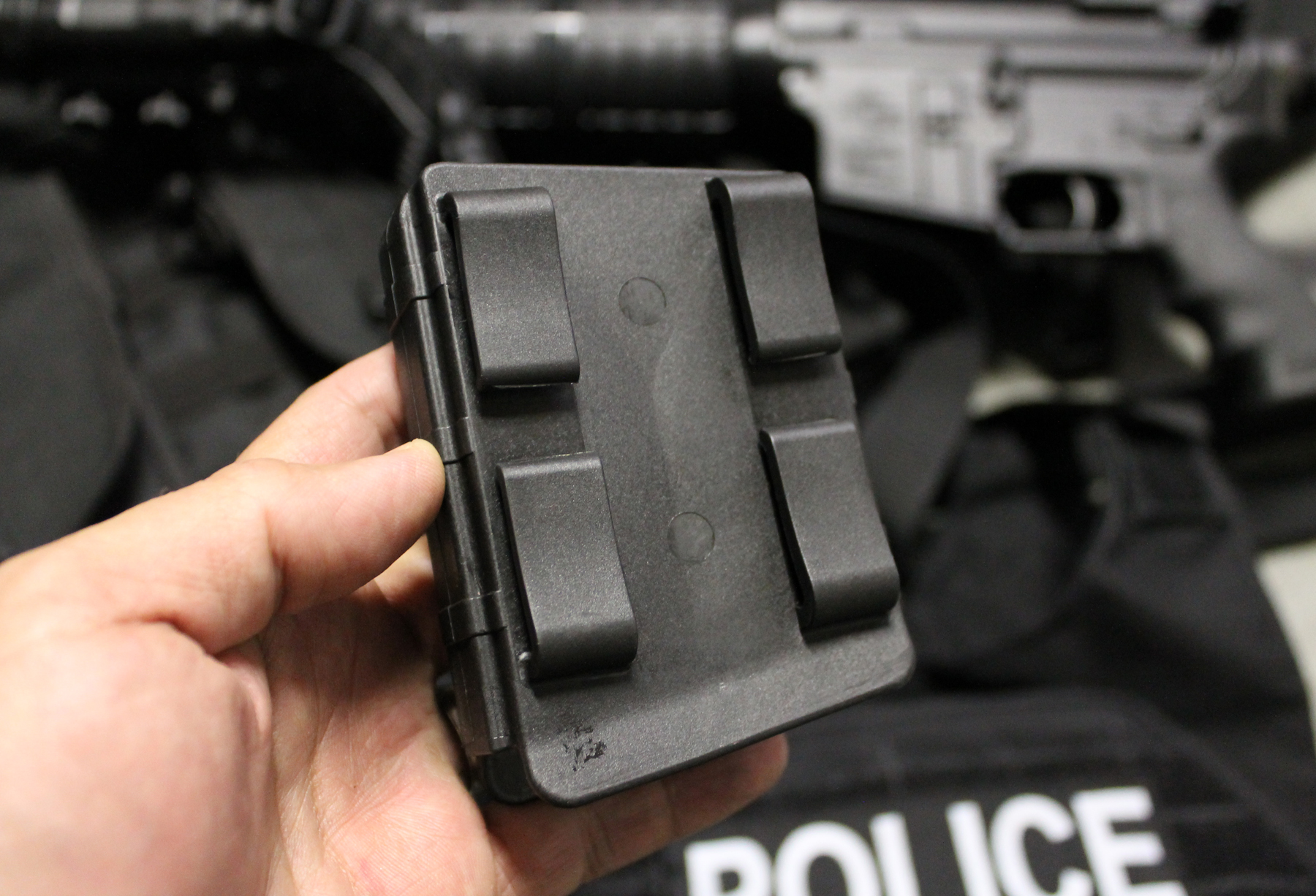 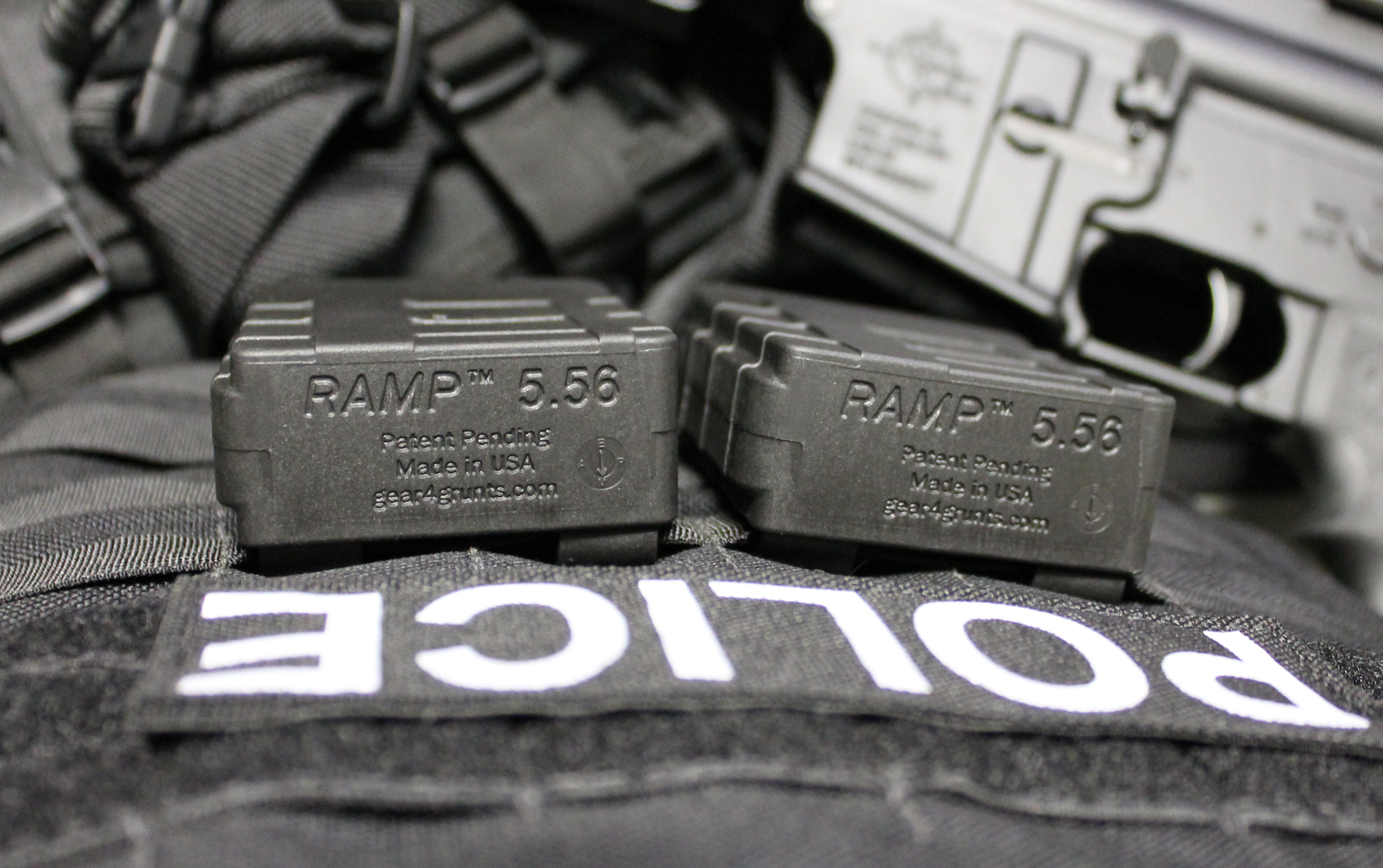 Because of the downward motion to retrieve an AR mag, care has to be taken to mount the RAMPs high enough so as to not interfere with pistol mag pouches or other gear on a cop’s duty belt.  I put the RAMPS where I could cleanly draw the magazines without hang-ups.

I carry stainless steel AR-15 magazines that have a black Teflon coating. There was no retention problem between these and the RAMP.  The RAMP not only has the molded-in detent feature, but the RAMPs are tight and provide a lot of surface area for a friction fit.  Doug had told me to pull the mags in and out a few times to get the RAMP set up. 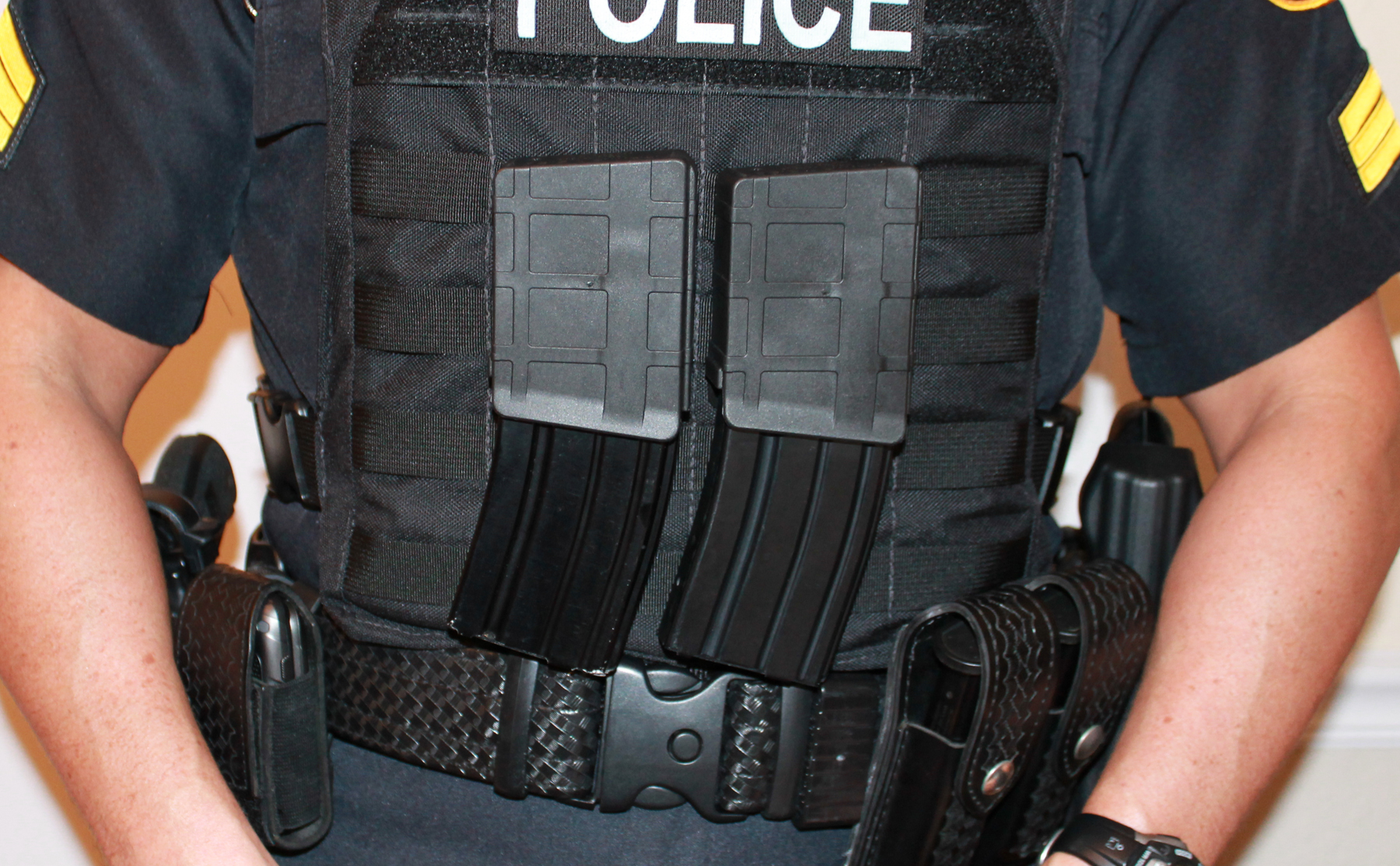 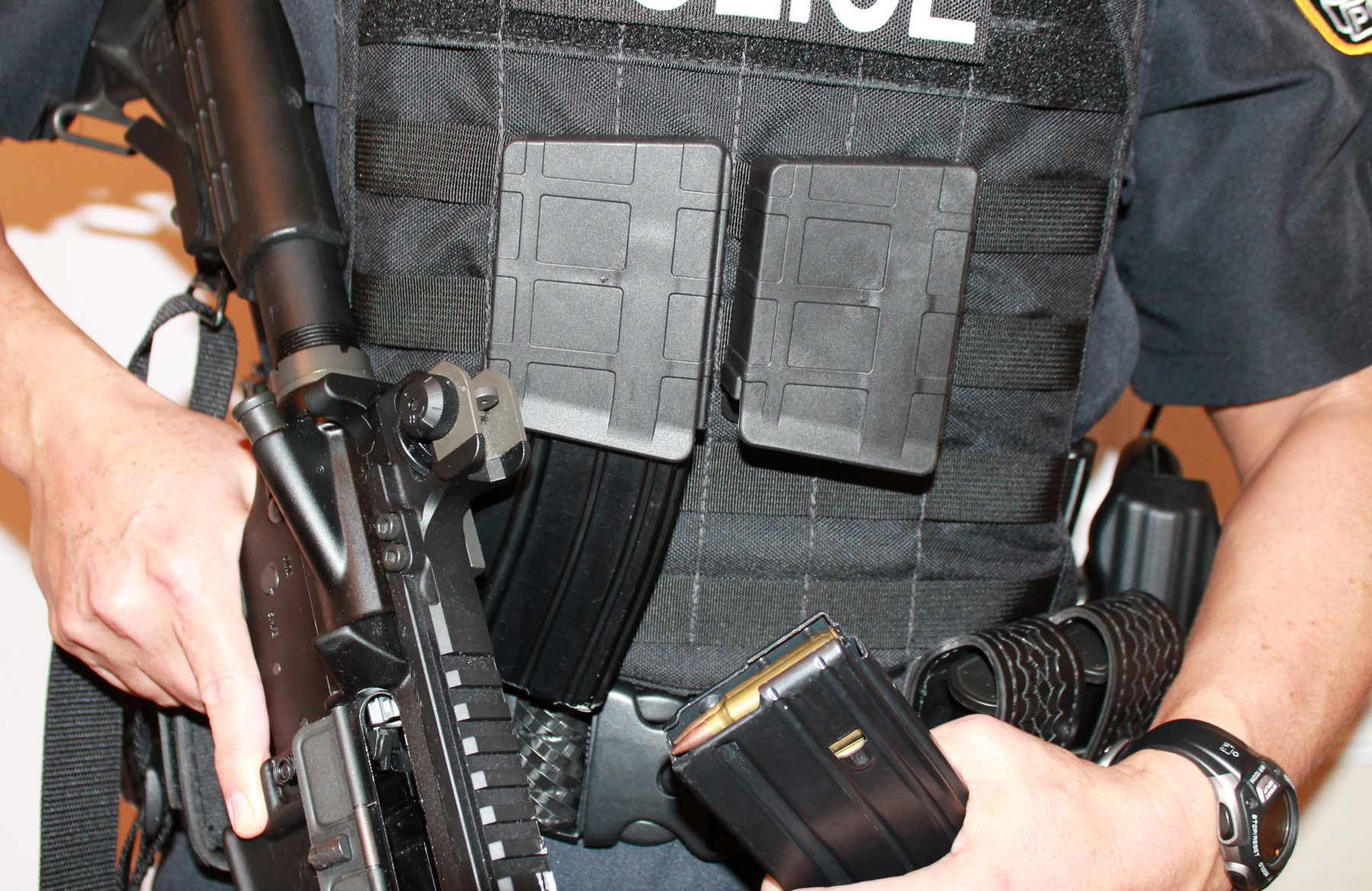 A nice thing about the RAMP is that it protects the open part of the mag, so your bullets and feed ramps do not get debris or dings.  Top-loading magazine pouches can some times become receptacles for sand and sticks.  Nylon pouches do not have any impact resistance.  The RAMP solves these two problems.

Gear4Grunts.com makes the RAMP in the USA.  They come in flat black, OD green, Ranger green, and light Earth.  A RAMP 5.56 retails for $26.95.  There are versions specifically designed for standard Military (steel, aluminum, and Magpul PMAG), Export (Magpul EMAG), and Airsoft/MilSim magazines.  A duty belt adapter, or DBA, is also available that allows a RAMP to be placed on your waist.  It retails at $16.95 and comes in either black or tan.

Doug Mullen has definitely thought out his product design for the RAMP and backed it up with real world testing.  I believe it is a great product and I had no qualms parting with cash on the spot.  Now that I think about it, the RAMP is the only thing I bought that vendors’ day.