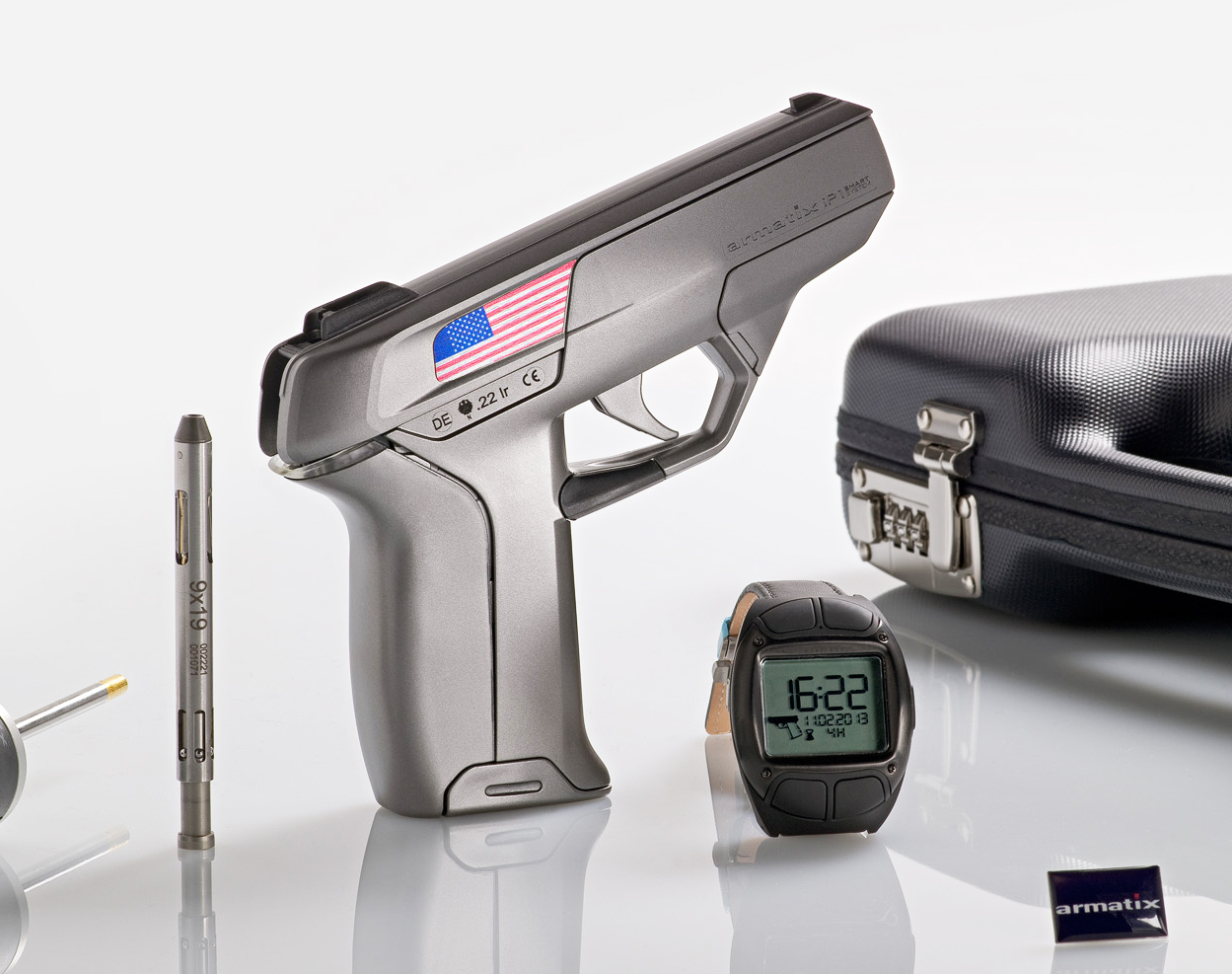 Armatix GmbH of Germany is selling a new .22 cal. handgun that is slaved to a radio frequency identification (RFID) wristwatch.  The pairing makes the gun active when the watch is within ten inches of the firearm and deactivates the gun when the watch does not have the proper PIN entered or is more than ten inches away from the pistol.  I am skeptical on several fronts.

Other than having to shell out nearly $2,000.00 for the Armatix Smart System ($1,399-gun,$399-watch, add taxes), I can think of a number of defensive scenarios in which this “smart” alternative would be stupid.  I am addressing the shortcomings of this product from the defensive firearm scenario, since the iP1 is clearly not a competition or range gun.  Strike one:  .22 cal. long rifle rimfire.  Moving on.

Trusting your safety and that of your loved ones to the functional integrity of a plastic wristwatch may be my biggest reservation.  Armatix says the watch is waterproof.  Grand.  Well, how shockproof is it?  If the watch could withstand my running over it a few times with a ’71 Ford Bronco and still be electronically viable, I may feel a teeny bit more confident.

Battery life is for the watch is reportedly a minimum of one year on stand-by.  I am not convinced that a battery powered pistol (because that’s what it essentially is) ranks high on my reliability score sheet.  Coincidently, the batteries in my Apple Magic Mouse died an hour ago.  My computer became useless.  I felt let down…and the Mac was not even defending my castle. 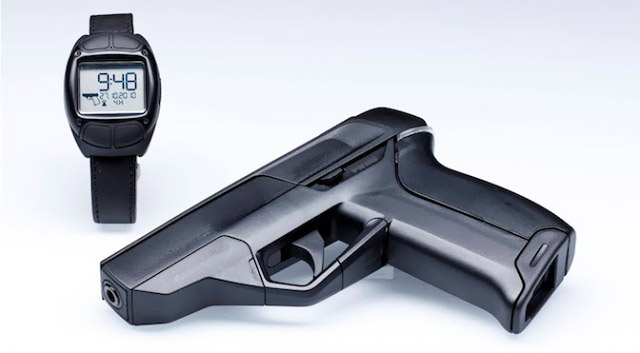 “Sweetie, quick get my Armatix!  I’m fighting a burglar!  Oooof!  Oh yeah, get the watch somewhere in the nightstand drawer!  Oww!  Keep looking!  No problem, I got him for now!  Grrrr!  Hey, where’s that firearm?  He’s getting mad!  Honey, honey?!”

A bad guy can still shoot you with your own Armatix if he keeps your weapon within ten inches of your watch.  In a grapple for the gun, everyone’s hands would be in close proximity.  No less danger than with a normal handgun. 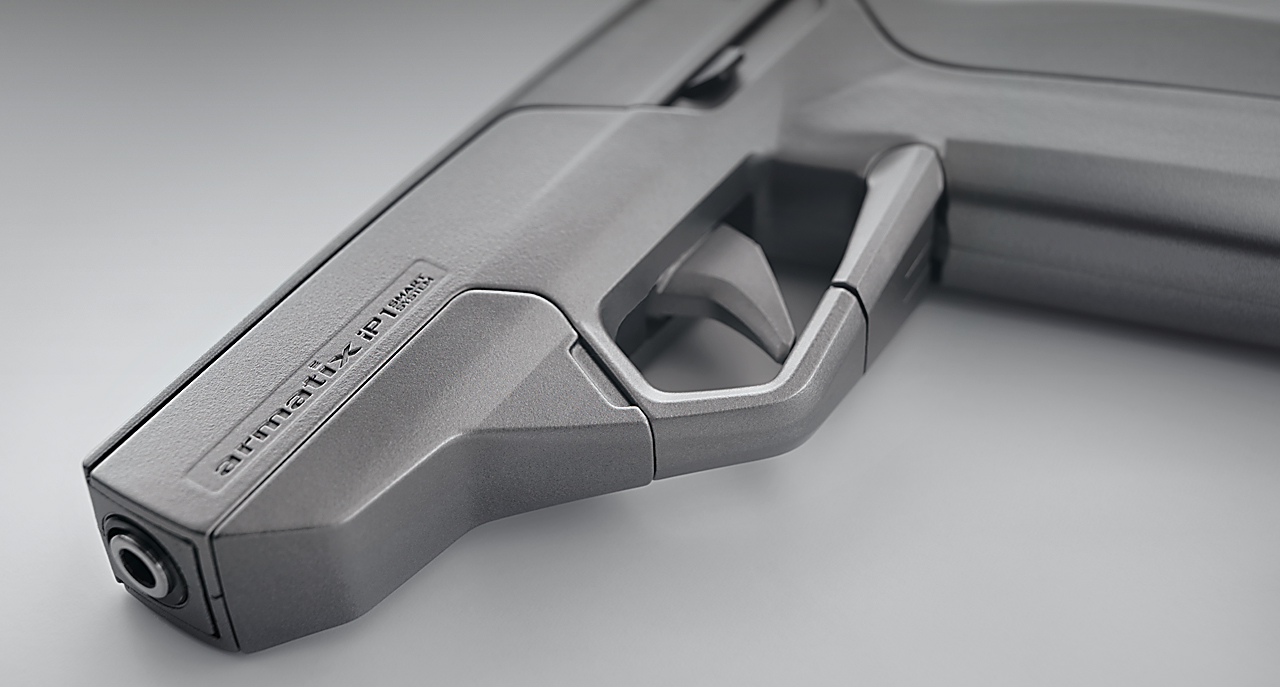 The Oak Tree Gun Club in Newhall, CA is the only retailer selling the Armatix iP1 in the United States.  But the fact that the Armatix is even being sold at all has ramifications in New Jersey, where a 2002 law mandates that only “smart guns” could be sold in NJ three years after the technology becomes available–in any state!

Other legislatures have considered smart gun mandates.  In Connecticut, Colt Manufacturing could not quite seem to get their microchip technology to work, despite throwing millions of dollars at the engineering problem.  Reliability issues could not be satisfied.

There are others in the smart gun race.  TriggerSmart, which deactivates its gun with an RFID ring, goes one step further than Armatix.  TriggerSmart Technologies says the second step in ensuring child safety with firearms is their product’s ability to create gun-free zones, like around schools, where smart guns would be prevented from operating.  Ruh-roh.

At this point in development, the smart gun is more a novelty than anything.  If you want to shell out a ridiculous amount of money for a .22, I am not standing in your way.  If you think that trigger locks and safes are too much of a hassle to take to keep your guns safe from children, then buy a Armatix.  No sweat.

What does bother me is the potential misuse of smart gun technology to curtail our Second Amendment rights–the same way California is circumventing gun owners’ rights by mandating microstamping for semi-auto pistols.  That move prompted Smith & Wesson and Ruger to stop selling semi-automatic handguns in California.  So the “bad” guns are eliminated without a single vote cast by a citizen.

While it seems that technology is driving much of our society nowadays, the implementation and ramification of these advances may not be the silver bullet some people think they are.  Cool new product adaptations are fine.  Let’s just slow down on using them to push partisan political agendas.

This entry was posted in Firearms, Politics. Bookmark the permalink.