Clay County Sheriff’s Detective David White was shot and killed Thursday during the investigation of a methamphetamine lab at a residence in Middleburg, FL.  Detective Matt Hanlin was wounded by gunfire in the same raid.  He is in serious but stable condition. 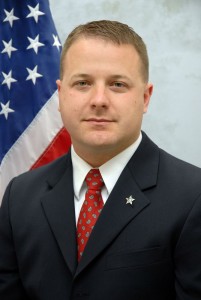 Detectives went to the single family dwelling in the 4800 Block of Alligator Boulevard on a tip of a meth lab.  The house was vacant, had a power cord running to it from a neighboring house, and was believed to be occupied by squatters.  The homeowner, Terrance Smith, gave deputies permission to go and enter the house.

Nine deputies arrived at the house.  White and Hanlin were at the front door.  After deputies knocked at the door, suspect Ted Arthur Tilley, answered the door, but slammed it on them.  As the deputies attempted entry, Tilley apparently shot several rounds through the door, striking White in the head and Hanlin in the arm.  Tilley was subsequently killed by deputies as he exited the rear of the residence, gun in hand.

Clay County Sheriff Rick Beseler said the deputies were wearing protective gear and followed procedure.  It was widely reported that the deputies were serving a search warrant, but no warrant was needed as they had the property owner’s permission to gain entry.

2011 was a terrible year for Florida law enforcement.  We led the nation in police fatalities for state/federal/territories with 14.  I hope 2012 will see fewer officers killed and injured.

An Army veteran, Det. White was 35 years old and leaves behind a wife and two small children.  He was a deputy sheriff in Clay County for nine years.