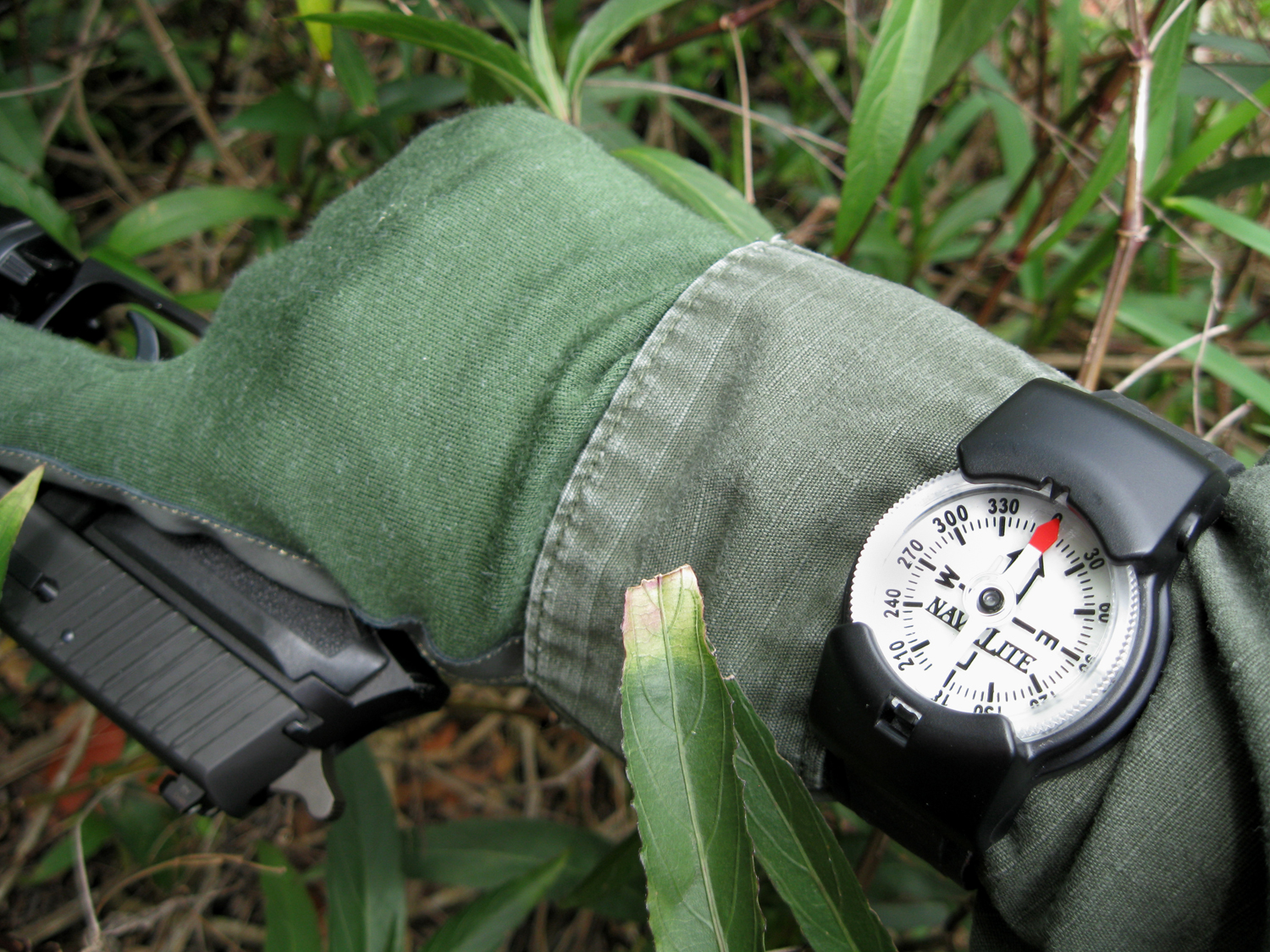 I remember a hostage rescue simulation, calendars past, that involved a rural house surrounded by very heavy woods.  I was an ATL then.  A sniper and I were tasked by the team leader with clandestinely scouting the location, staging the outer perimeter, and finding the best ingress to the target for the assault element.  We kind of got disorie…un-uhhh…lost.  Thankfully, it was just a training scenario.  NavElite currently produces a compass that I would certainly recommend to active guys in SWAT.

Wearing a wrist-mounted direction finder that has backlighting can be a huge advantage in tactical operations.  Yeah, you could fool around with a flashlight and hand held lensatic compass, but being able to get a heading at a glance while holding a rifle, or a shield and pistol, or while carrying equipment, is safer and much more efficient. 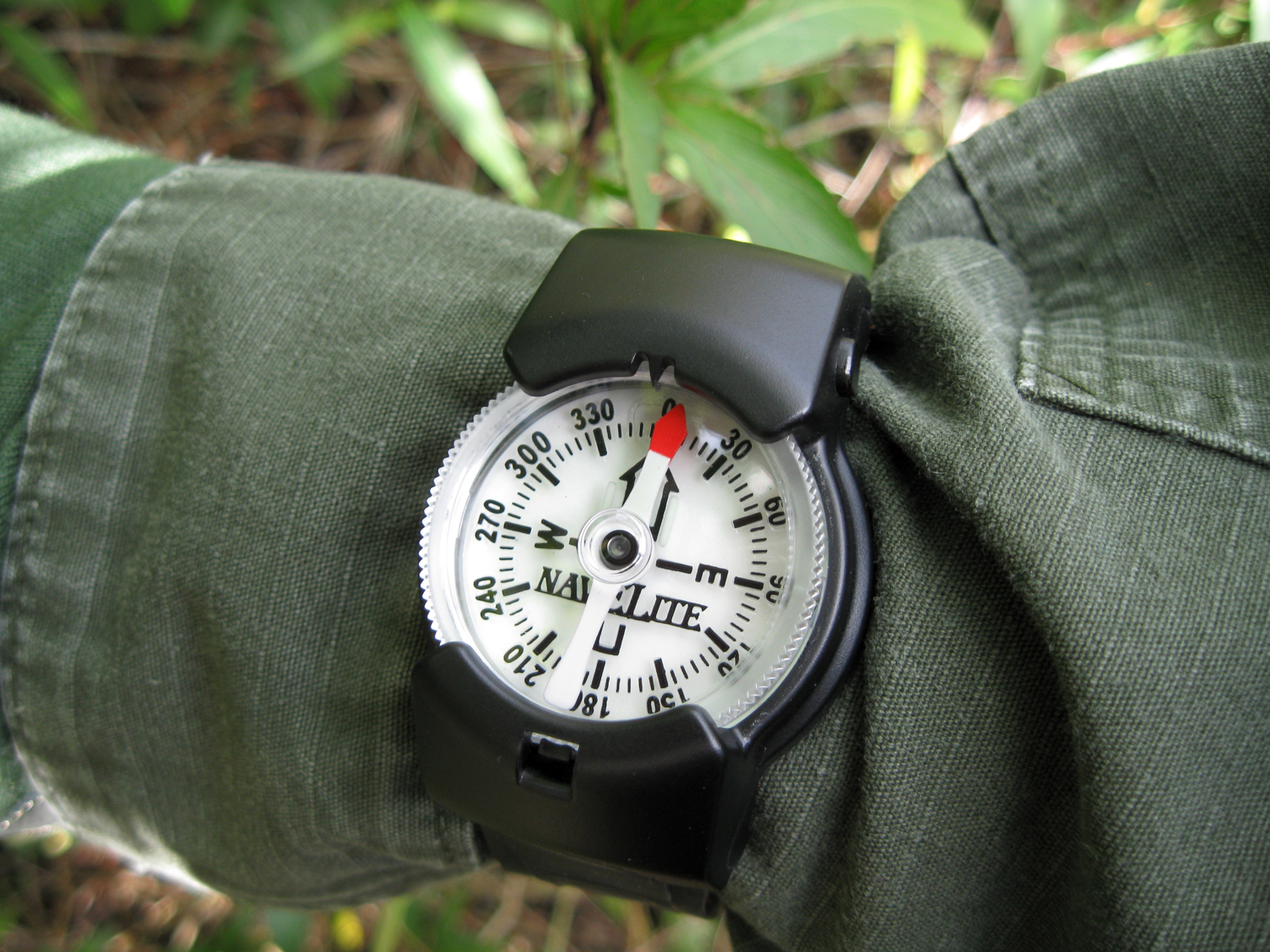 NavElite LLC is a Florida company that has brought the design savvy of two Special Operations soldiers to the world of navigational instruments.  The two soldiers, Caroll and Andy, found that there was a need for a wrist worn backlit magnetic compass, which did not exist in the marketplace.

At the time that Carroll and Andy were conducting “business” in Afghanistan, post 9/11, digital wristwatch compasses were becoming popular, but their battery drain and calibration were problematic.  And GPS units are great until they aren’t—dead batteries or fouled up electronics can cause you to miss your appointment.

NavElite’s Backlit Magnetic Compass (BLMC) is a reliable solution that appears simple, but is laden with innovation.  I obtained a base model NavElite Trekker H to test.  The Trekker comes in an “H” model for hold the button for backlight, and a “P” model for press on/off for the backlight.  NavElite Waterblocker models H and P are submersible to one meter for 30 minutes with full compass and light functionality. 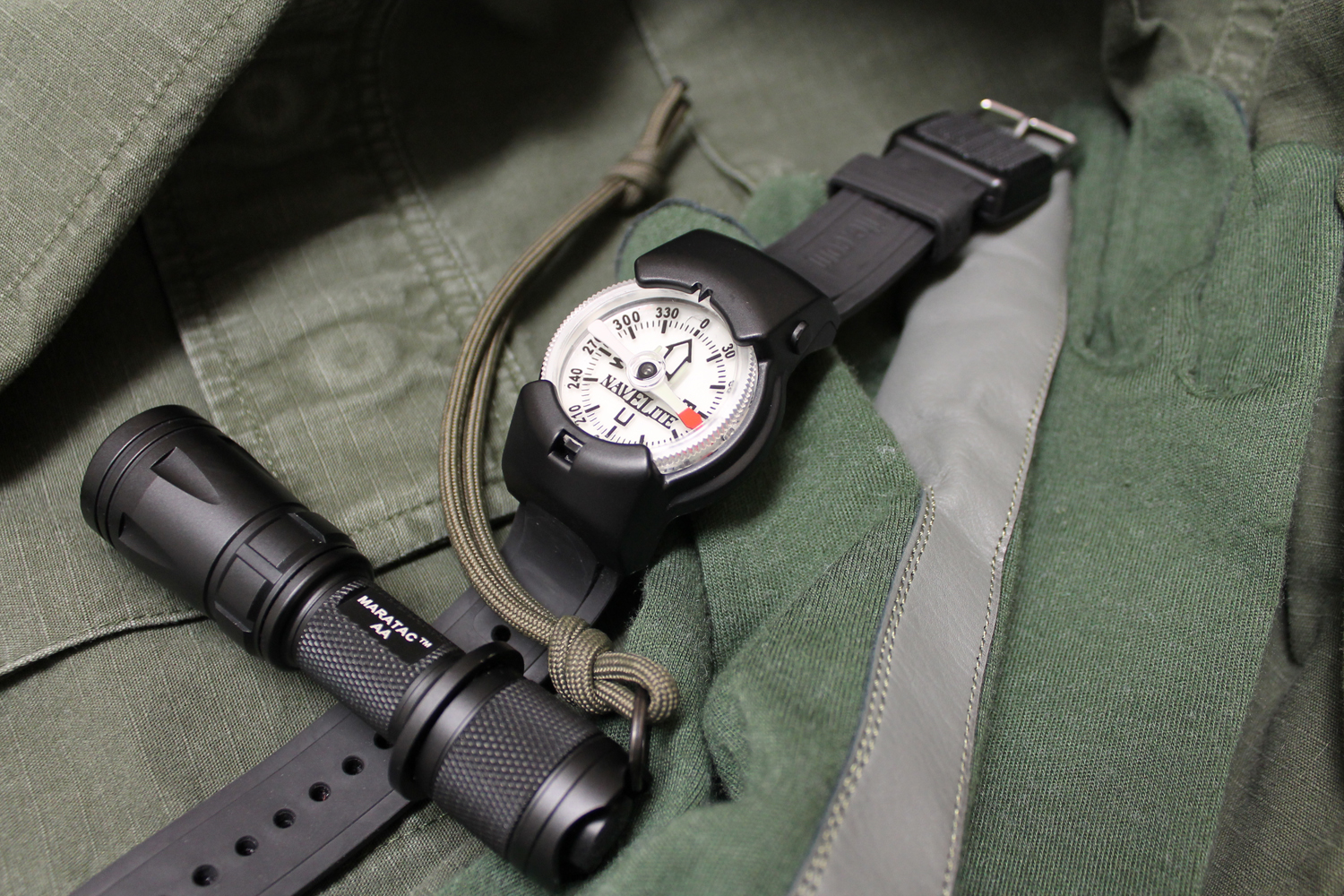 Because magnetic compasses can be influenced by the electromagnetic fields generated from electrical circuitry, Carroll and Andy made the BLMC with an electroluminescent panel mounted under the compass dial.  Having the battery placed in a small case by the buckle of the band and using the benign, low volt chemical reaction of the EL panel to provide illumination solved any compass error that could be caused by standard lighting.

After successfully patenting their design, Carroll and Andy were awarded a contract by the U.S. government to produce 200 prototype NavElite compasses, which were shipped to Iraq, Afghanistan, and other locales.  To achieve their high manufacturing standards, NavElite makes 90% of their compass from their own original parts.  Though a small amount of components come from offshore, NavElite is still able to boast Made in the USA.

The NavElite’s compass dial is very easy to read.  Along with markings for the cardinal points, there are hash marks in five degree increments and numerals every 30 degrees.  The case diameter is 34.54 mm.  NavElites have a ratcheting bi-directional bezel.  The illumination button in mounted on the upper right side of the case.  Both the bezel ring and illumination button are large and can be worked with gloves. Scratch resistant Lexan™ makes up the compass capsule. 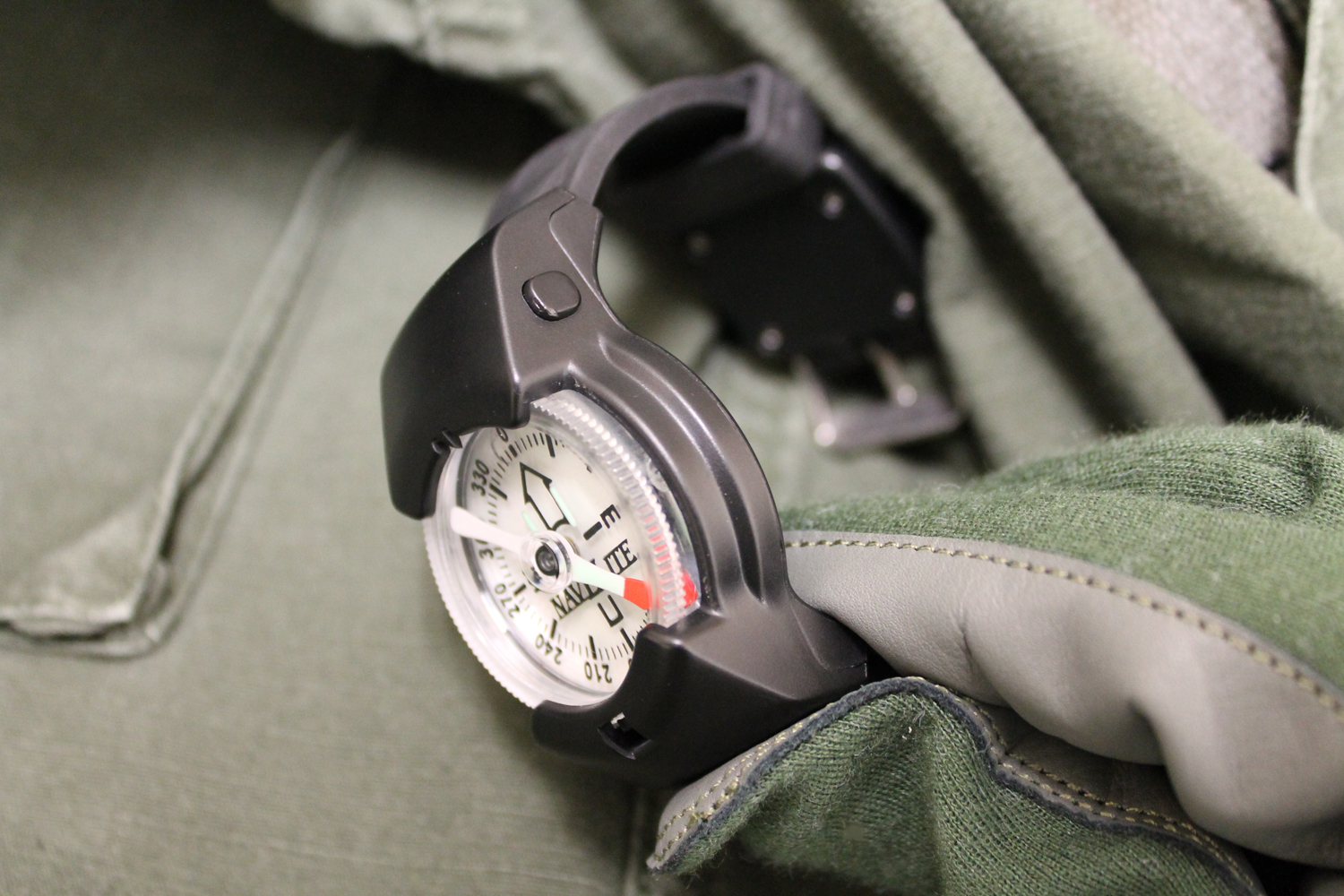 For low light, two prominent luminous hashes at North and a luminous needle point you in the right direction (sorry).  When the darkness encroaches, pushing the EL panel button lights the dial in green.  It looks bright in the photos, but it is appropriate for sensitive operations and use with night vision goggles. 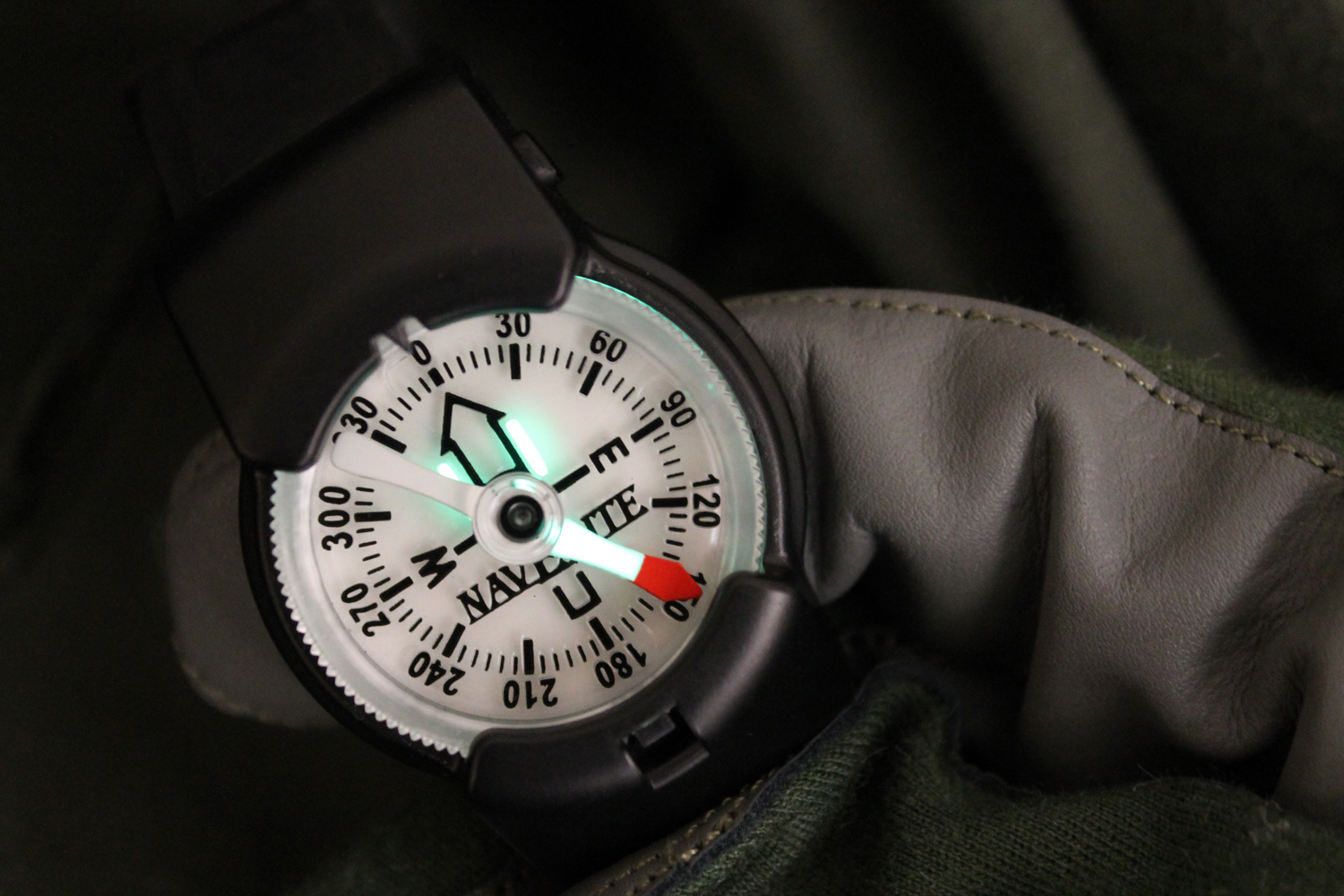 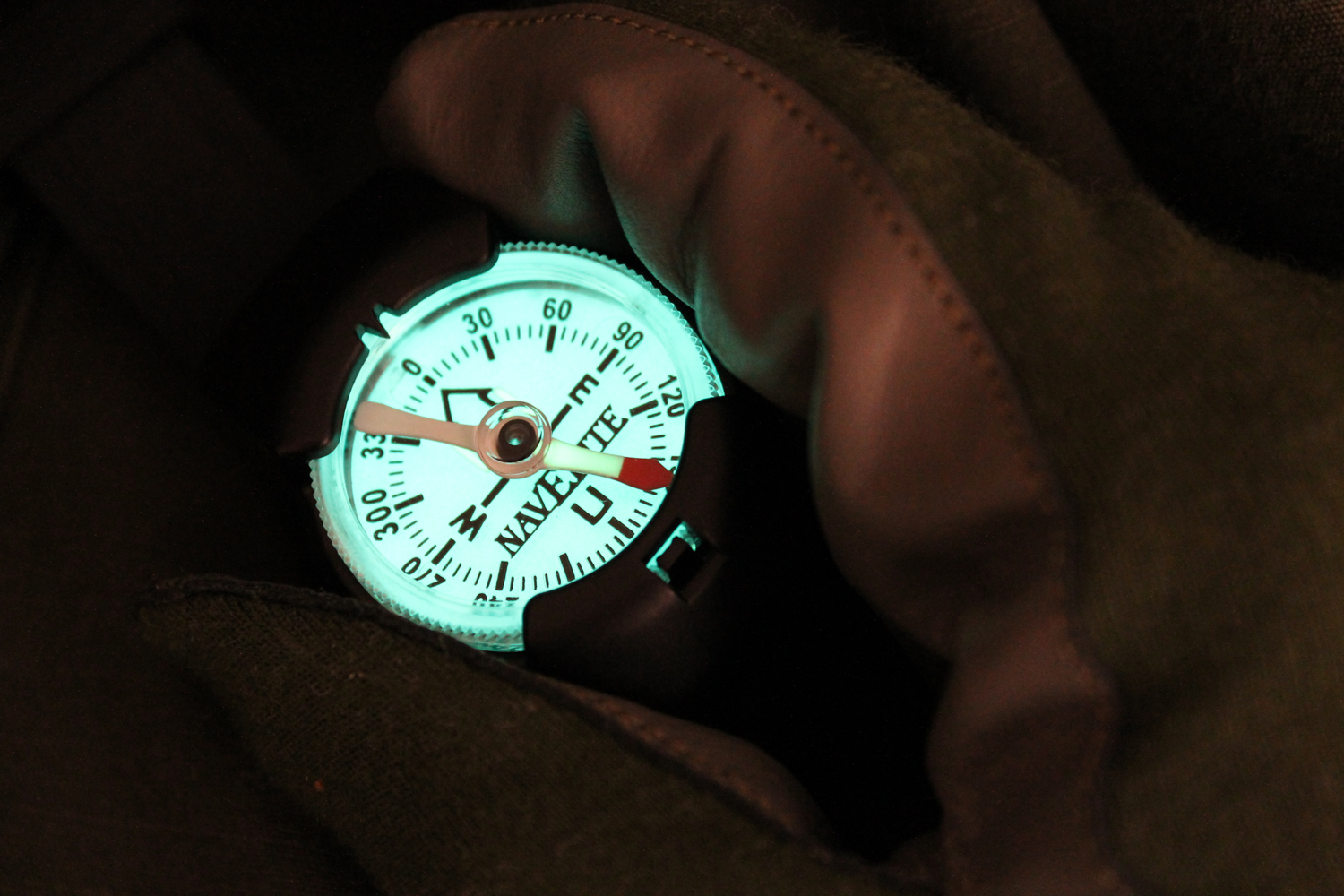 NavElite’s band is secured with both hook and loop and a metal buckle.  To fit over gloves and/or jackets, the band is extra long.  It feels like nice silicone rubber.  The battery case, which contains a 3.0v coin cell, is unobtrusive during wear.  The whole compass weighs just 1.7 ounces.  I found it very comfortable on my bare wrist. 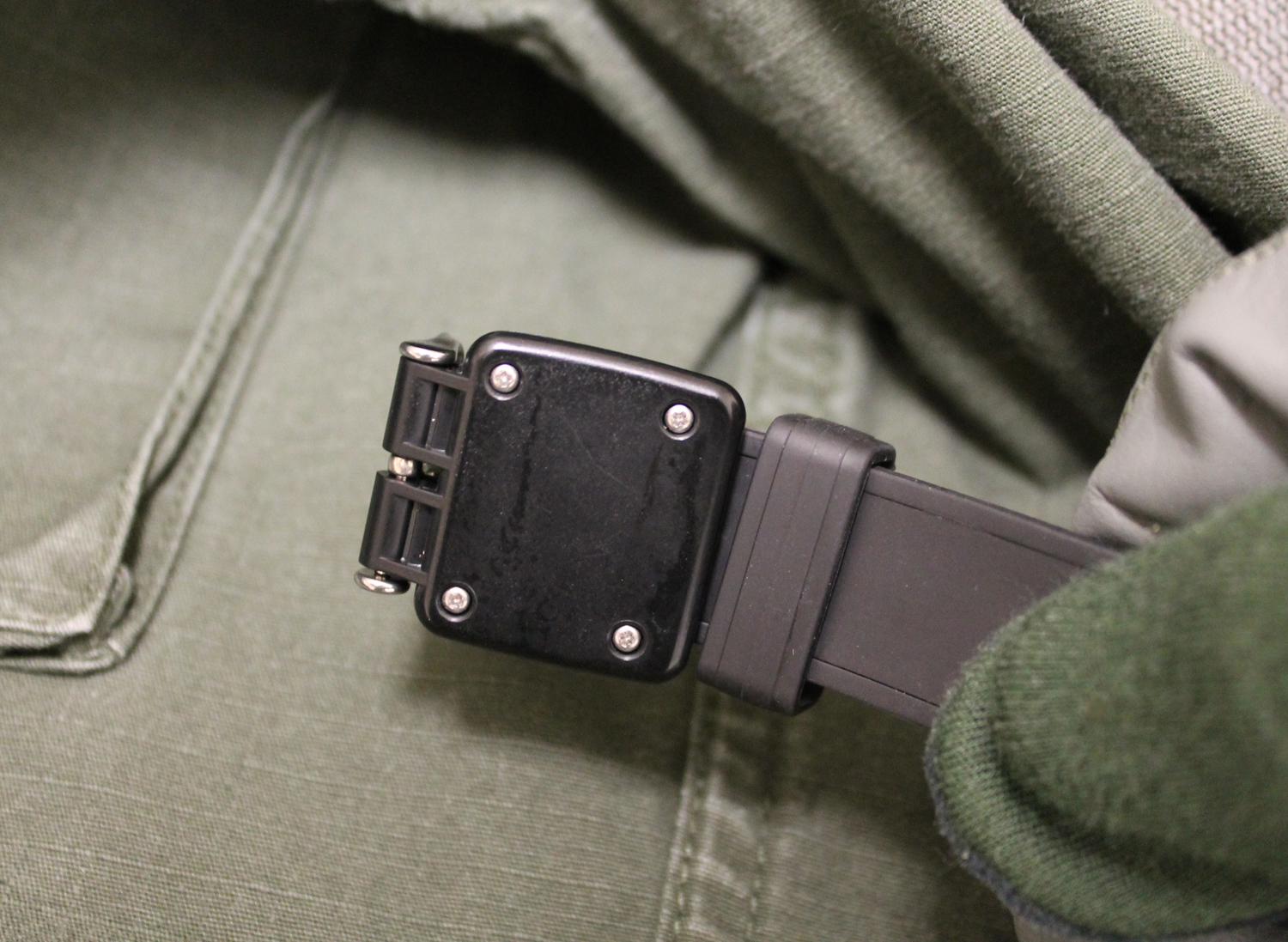 The compass needle rides on a polished pivot pin and a jeweled bearing that provides accurate damping in less than three seconds!  The NavElite compasses are designed for use in the Northern Hemisphere, but are purported to work into the Southern Hemisphere just below the equator.

My compass worked perfectly.  I like that a magnetic compass will contribute in the event there is a loss of batteries or GPS satellites.  That gives the NavElite brutal reliability in a world that increasingly survives on things electronic.

I think that NavElite compasses are a valuable commodity when strapped to the wrists of soldiers, law enforcement officers, and outdoorsmen.  My Trekker H has an MSRP of $79.99.  It provides functions and features found in no comparable product.  Nicely done, Carroll, Andy, and John!