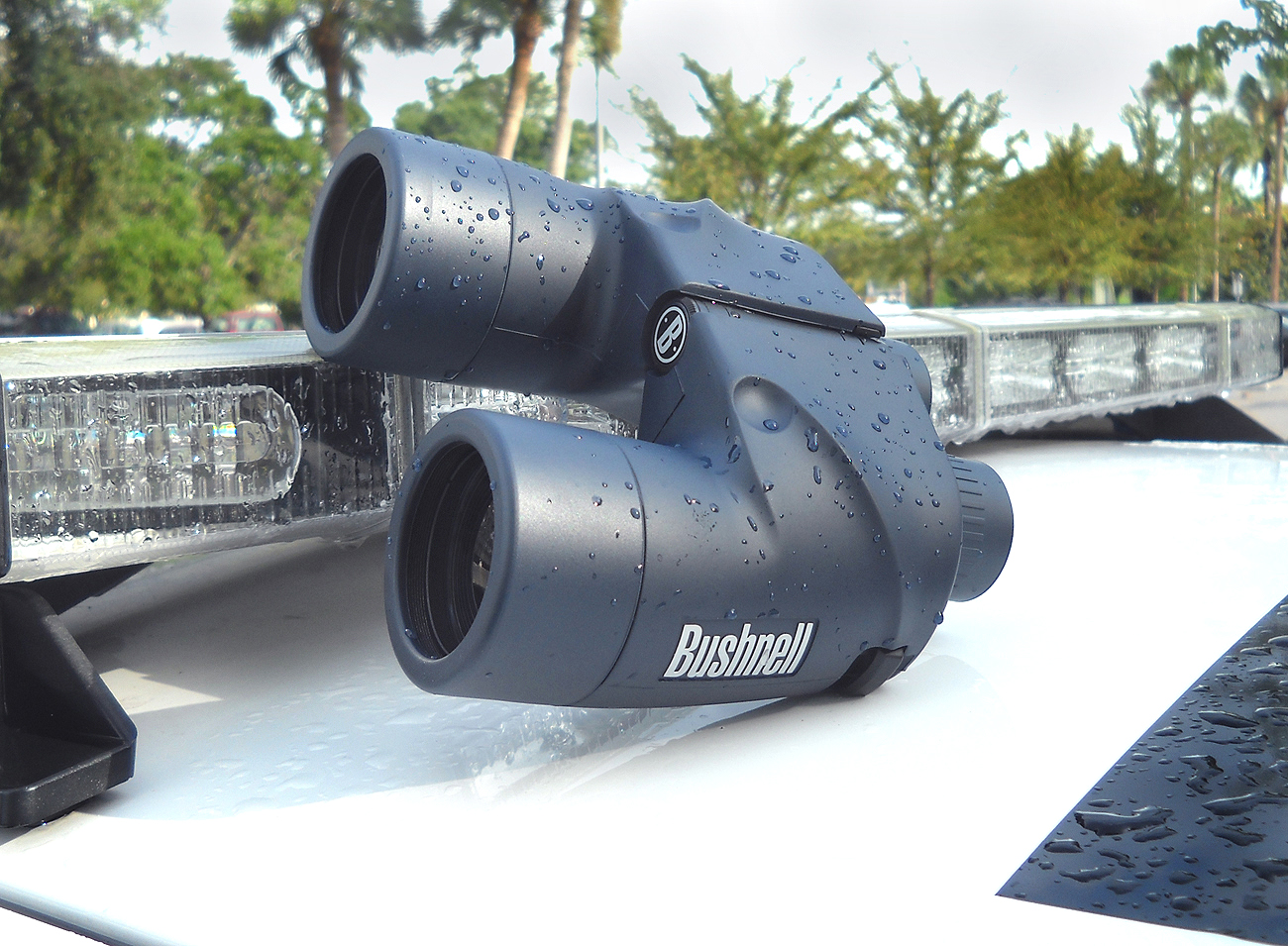 Surveillance is a daily component of the job as a law enforcement officer.  A good pair of binoculars and the understanding of how they work are essential to the task.  Bushnell’s Marine 7X50 binoculars are outstanding in this arena.  Why?  That requires a little explanation.

Tech alert:  if you don’t want to learn about how binoculars work, too bad.

A binocular optic enhances our vision by magnifying the light that enters our eyes.  Binocular vision means having two eyes arranged for stereoscopic viewing, which gives us depth perception.

Much of police surveillance occurs in low light or darkness conditions.  Traditionally, 7X50mm binoculars are referred to as “night glasses” because of the maximum amount of light they can provide at dawn or dusk.  This also works when the sun has gone down.

Simply speaking, the size of the “exit pupil” of a binocular determines how much light reaches your eye.  Dividing the 50mm objective lens by the 7X magnification gives you a 7.1mm exit pupil.  This is important because a fully darkness-adapted human eye can achieve a 7mm pupil diameter with which to see.  A 7mm exit pupil transmits the most light a normal, young human eye can see through a binocular.

By comparison, I also have a pair of 10X25 Bushnell binoculars in my cruiser.  The 10X magnification is good, but when the light wanes, the smaller 25mm objective lens only makes for a 2.5 mm exit pupil and thus only transfers only a third the light of 7X50’s.  I used to think my pair of 10X50’s was good for night viewing, but at only a 5mm exit pupil, bigger is not always better. 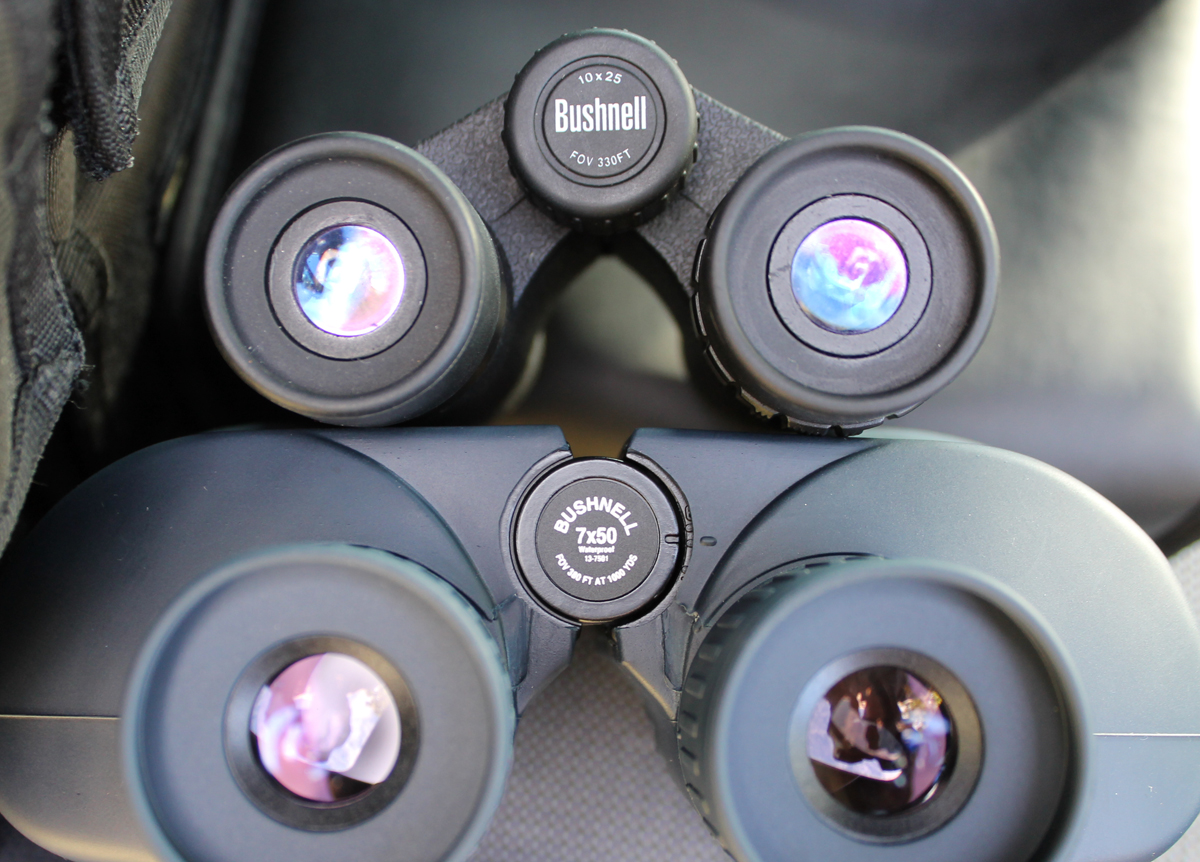 Now that we understand night glasses, what other features are good?  Bushnell’s Marine binos have “fully multi-coated optics,” which means all air to glass lens surfaces are given multiple layers of anti-reflective coatings to aid light transmission.  This is the best coating in a binocular. 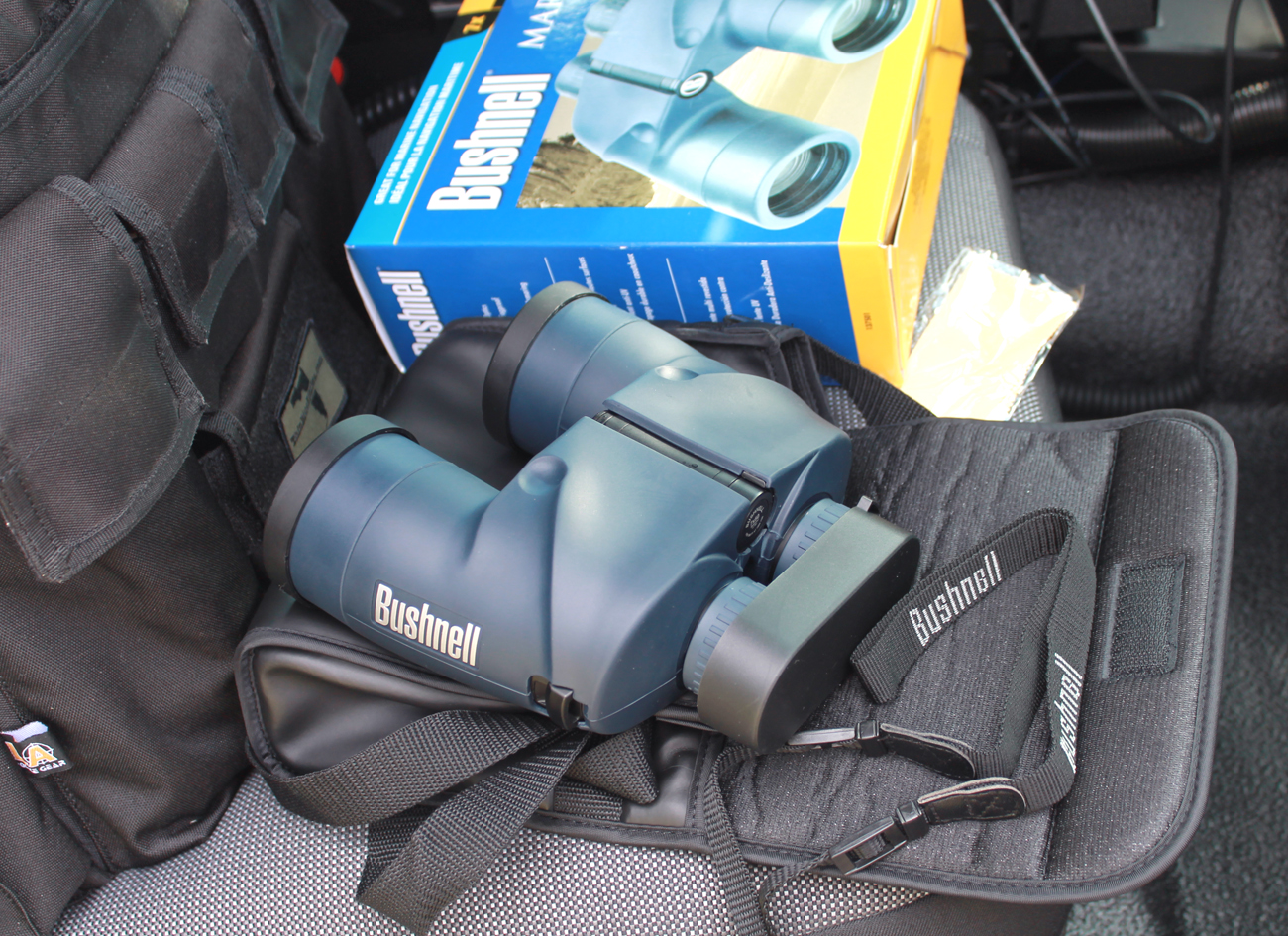 Smaller straight-tubed binoculars, like my 10X25’s, utilize roof prisms.  Larger binoculars with offset tubes use Porro prisms to orient the light.  The Bushnell Marine 7X50’s use top-of-the-line BaK-4 Porro prisms which are made with superior optical quality glass.

The binoculars in a cop’s car have to be rugged, and that’s where these Marine binoculars have what it takes.  Bushnell’s Marine 7X50’s are protected by non-slip, non-skid thick rubber armor.  This mitigates the hard knocks that will throw a binocular out of alignment when they are casually tossed across the passenger compartment or into a trunk. 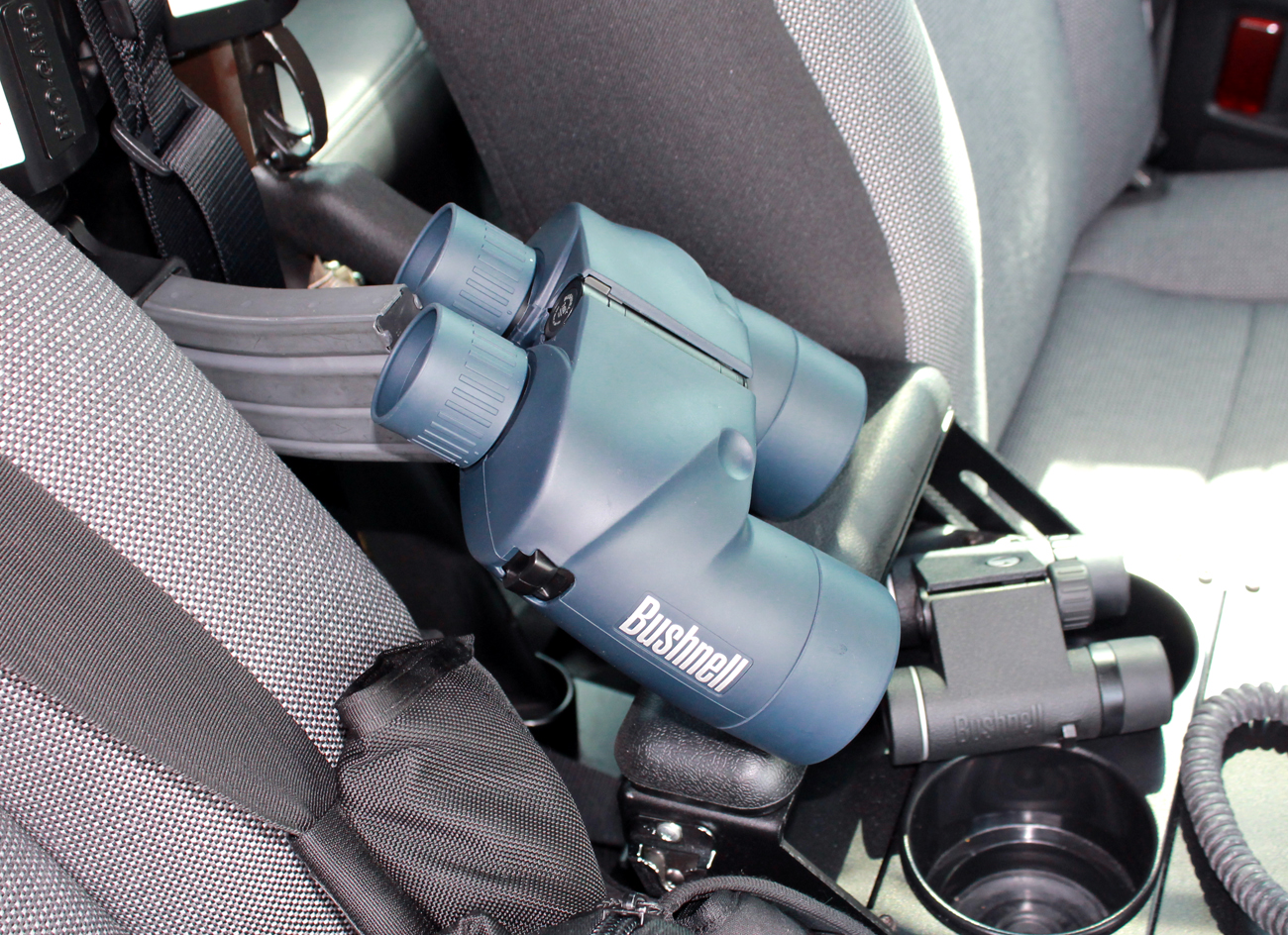 Considering Florida’s rain and humidity, of particular interest to me are waterproof and fogproof binoculars, which these 7X50 binoculars are.  The Bushnell Marine is filled with nitrogen and hermetically sealed.  This binocular also floats!

Taking low light photos through a pair of binoculars with a camera can yield disappointing results.  I went out at dusk to take some comparison photos and, while they don’t do the binocular justice, the images do illustrate the point. 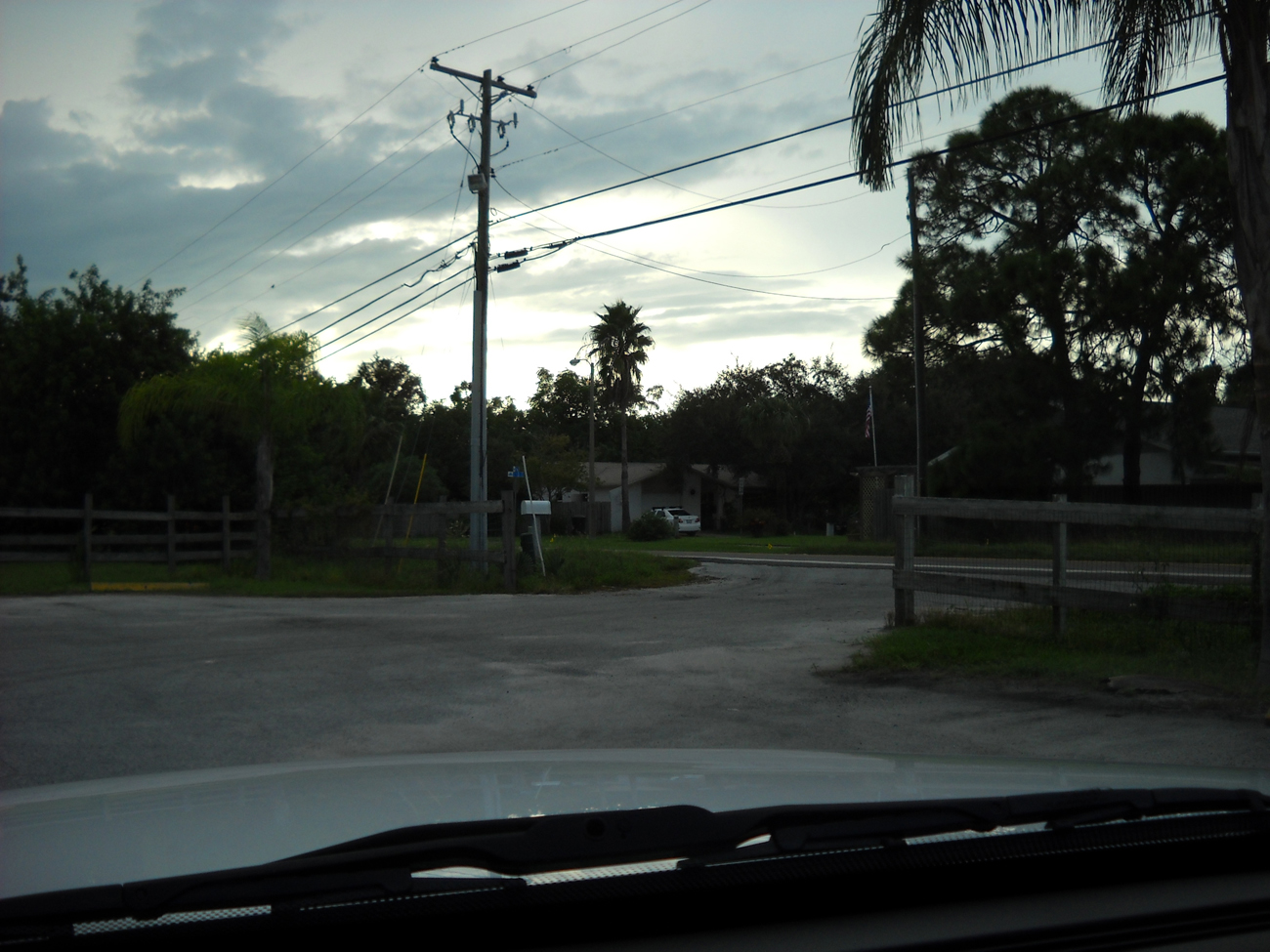 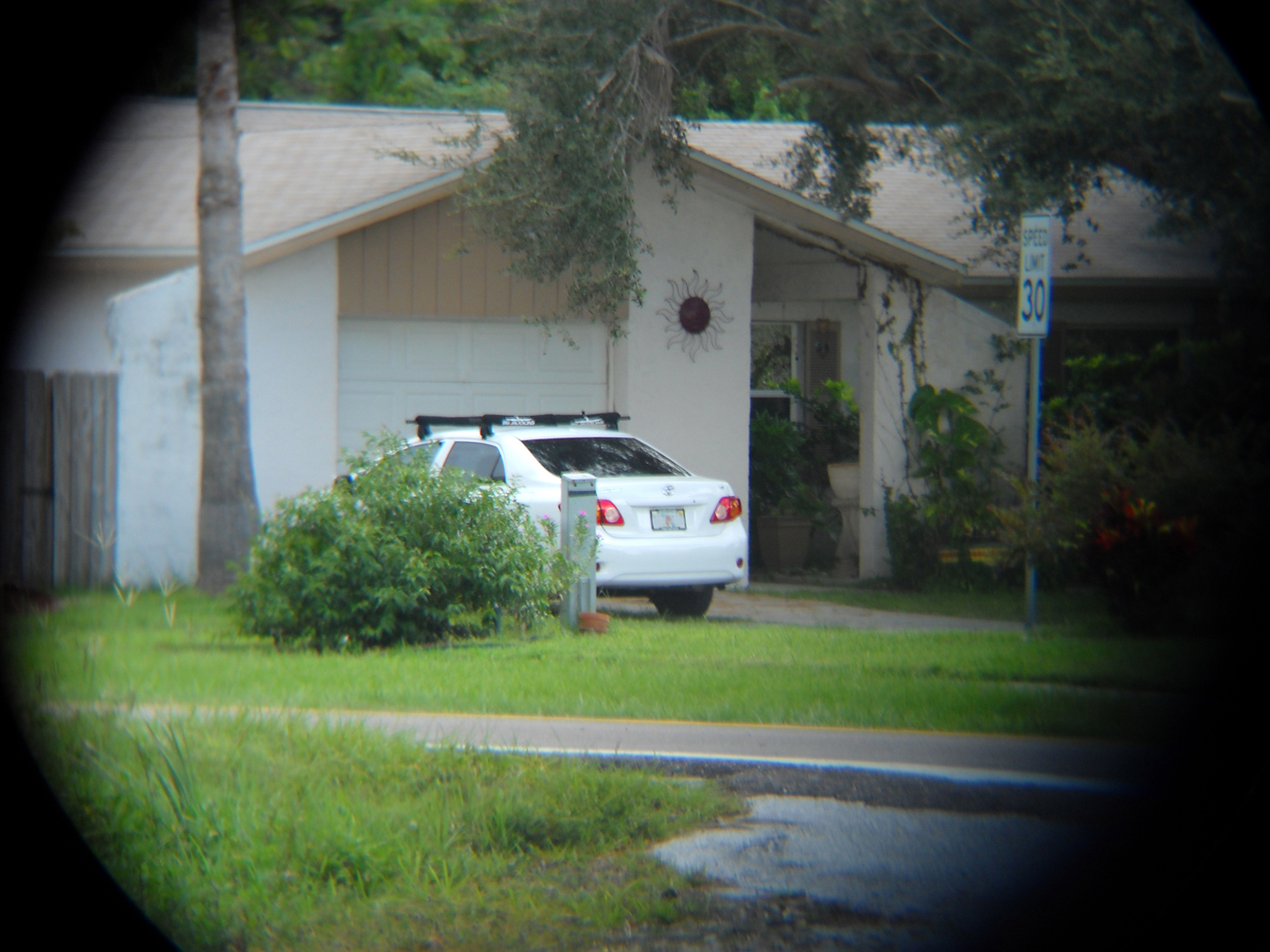 Both photographs are unretouched, save for image size and the Florida tag.  I have not increased or decreased the brightness of either photo.  Both images were taken at 5:58 p.m., so the outside lighting was consistent.  Even with my old eyes, the Bushnell binos gave a great result.  Though I obscured the license plate in the picture, it could be read through the binoculars.  Details by the house become very vivid.

I have used these Bushnells all over town on Evening Shift and I am impressed by the clarity and depth of the image.  Even when there is only street light illumination, the view seems like low daylight through these binoculars.

With an MSRP of $219.00, but deals found around $130.00 online, the Bushnell Marine 7X50 is a true value for a binocular with full features and excellent optics.

I work an urban area and there is always some artificial ambient lighting thrown from everything from streetlights to signage.  Most nights, the moon also ponies up some added brightness.  A good pair of night glasses, like these, lets you penetrate the shadows and surveil in the darkness.