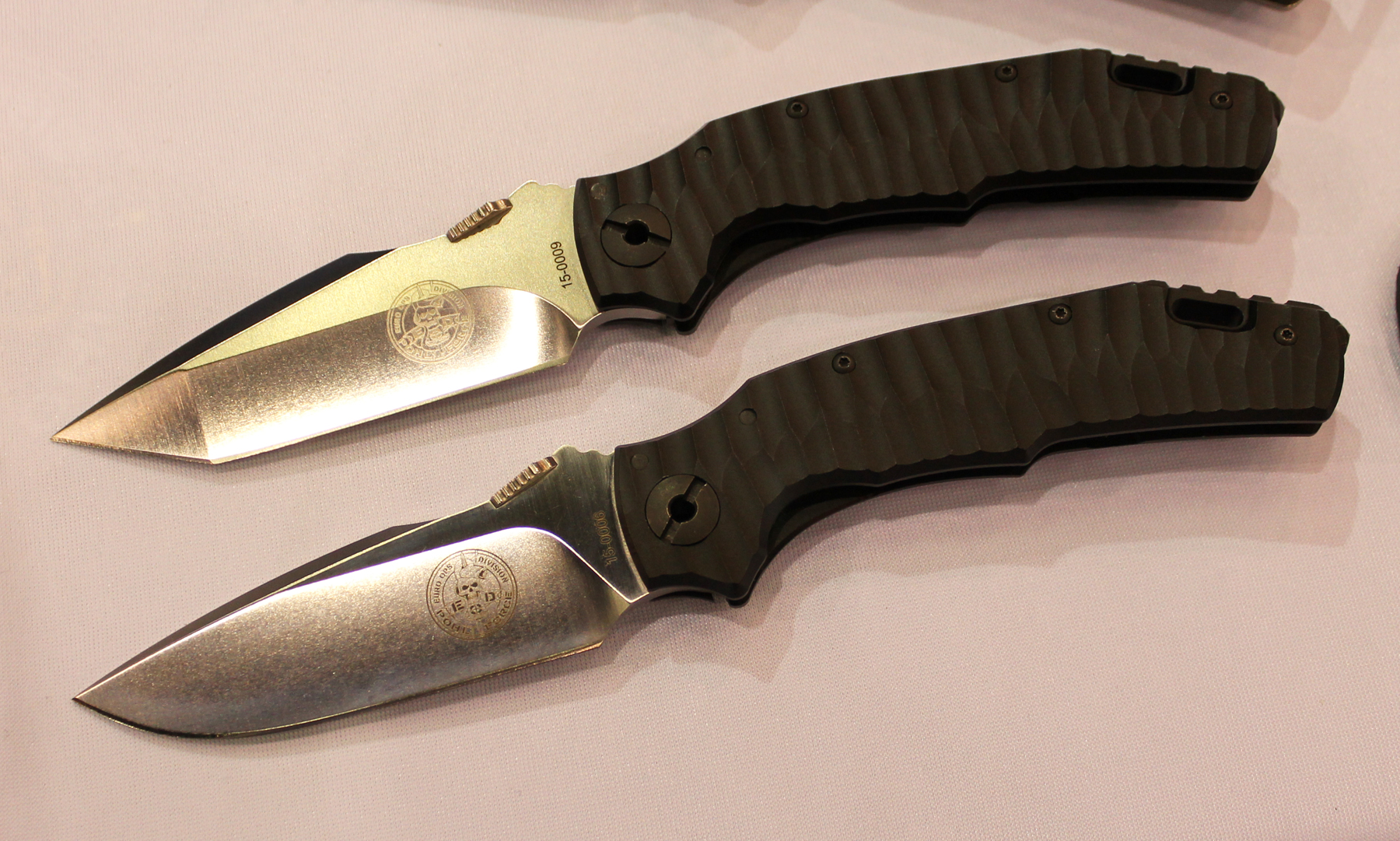 Dietmar Pohl has been designing knives for over a decade and a half.  He is a recognized expert in tactical knives for military and law enforcement uses and has written acclaimed books on the subject.  The knife company he founded, Pohl Force, featured two new folders at BLADE Show 2015.  These were the Mike Three and Four Outdoors.

Pohl Force’s EOD (Euro Ops Division) partnered with Italy’s Lionsteel to produce these robust knives.  The Mike Three and Four are modified versions of Pohl Force’s popular Mike One and Two.  The production of the Three and Four dialed back some of the more expensive manufacturing components and processes to bring the pricepoints down, but still maintain the quality and durability of the new Mikes.

The Mike Three and Four forgo the titanium/G10 handle in favor of hard-coated, 3D machined aluminum over a steel insert framelock.  The result gets us the same tight blade lock-up, but shaves pennies (euro coins?) off the cost.  I thought the handles had an efficient shape that felt very natural in the hand.

The satin-finished Niolox blade of the Mike Three is a spearpoint, while the Four wears a rakish tanto.  Both blades come in at 3.74″ and open via angled ambidextrous thumb disks. The guys in Maniago really put some nice grinds on the Niolox.  The feel of these knives is more custom than production.

A reversible tip-up pocket clip is made for deep carry and has a useful carbide-tipped glass breaker threaded in.  I like this standard style of clip over the Mike One and Two’s wire affair. 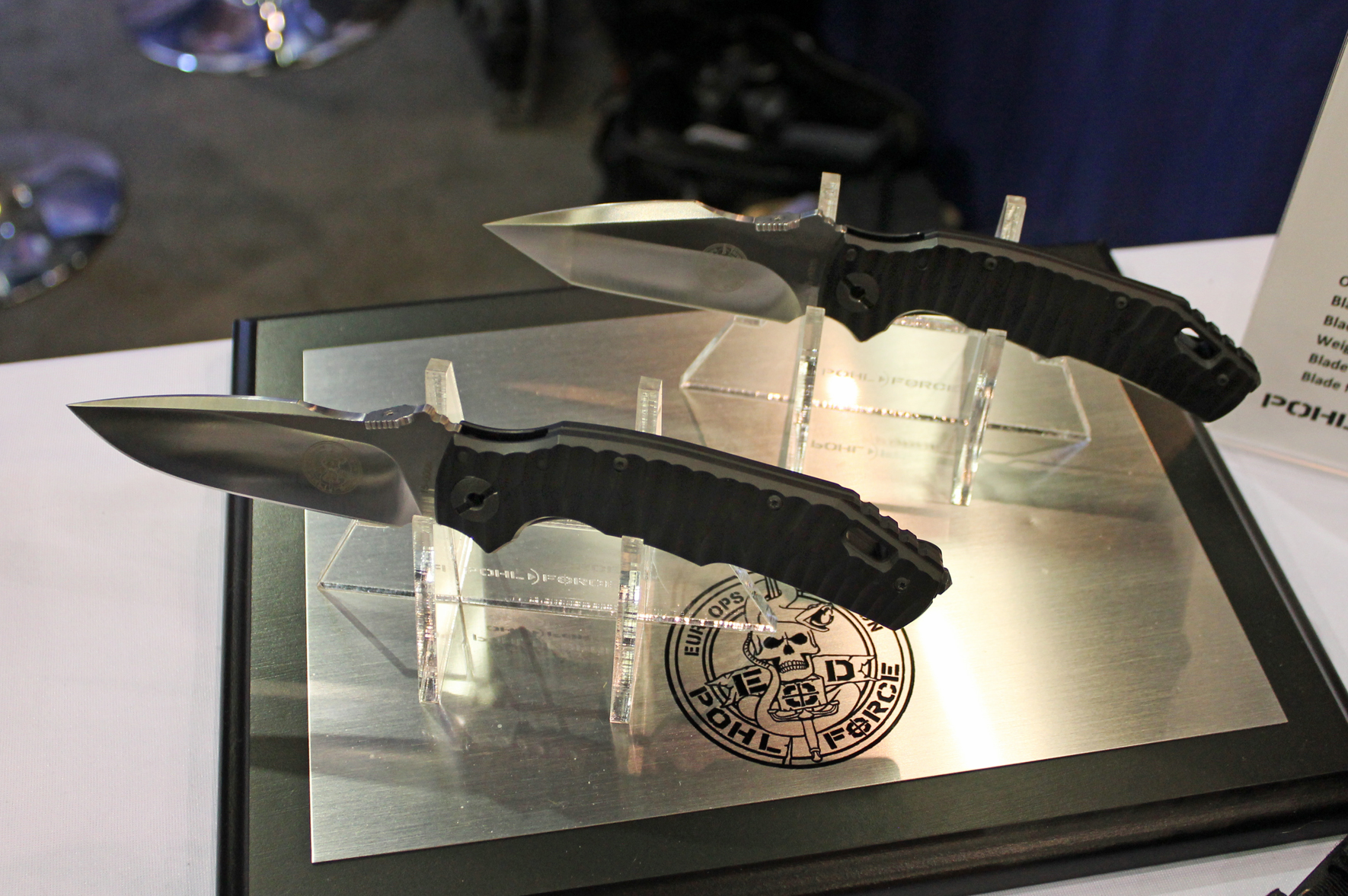 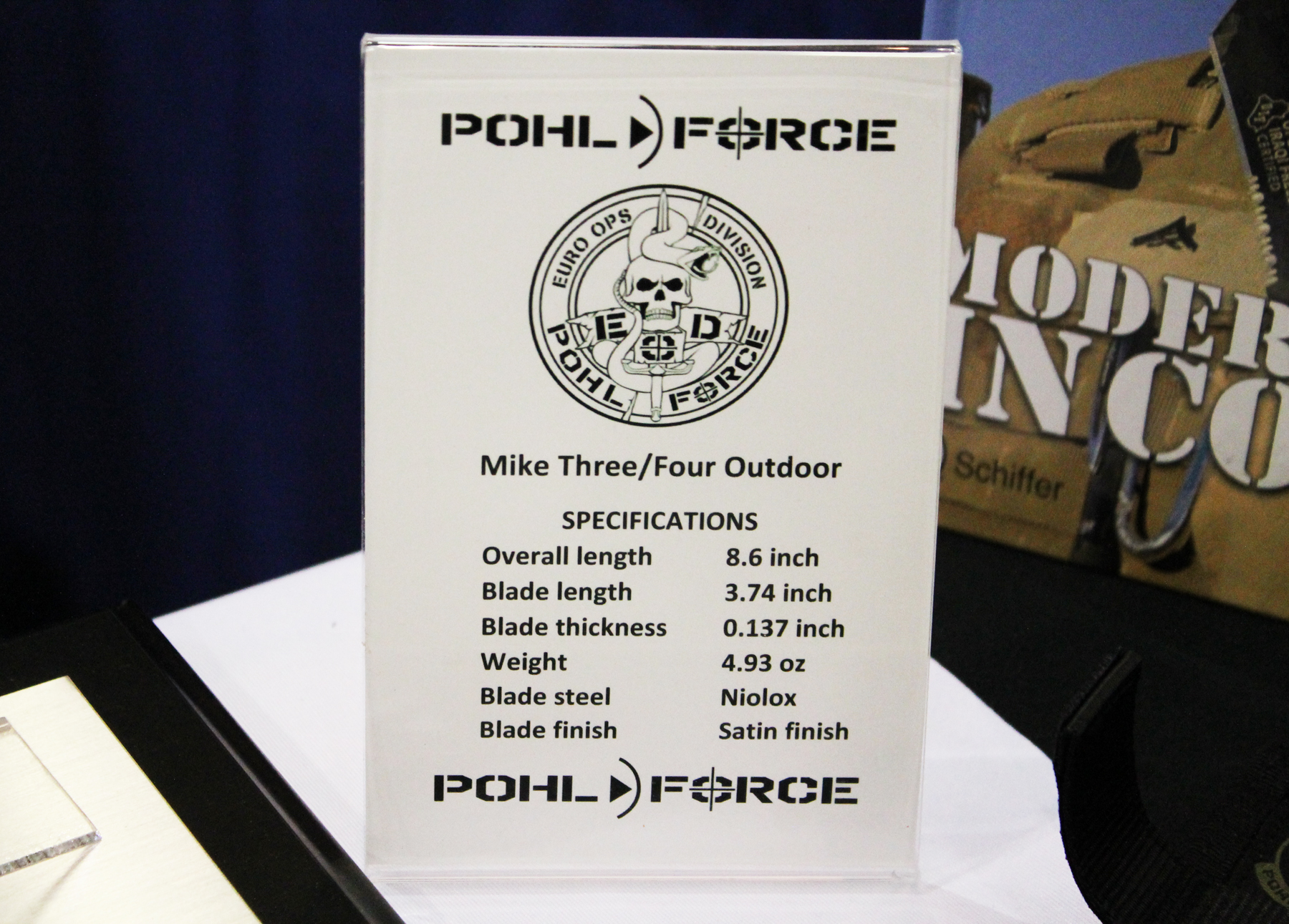 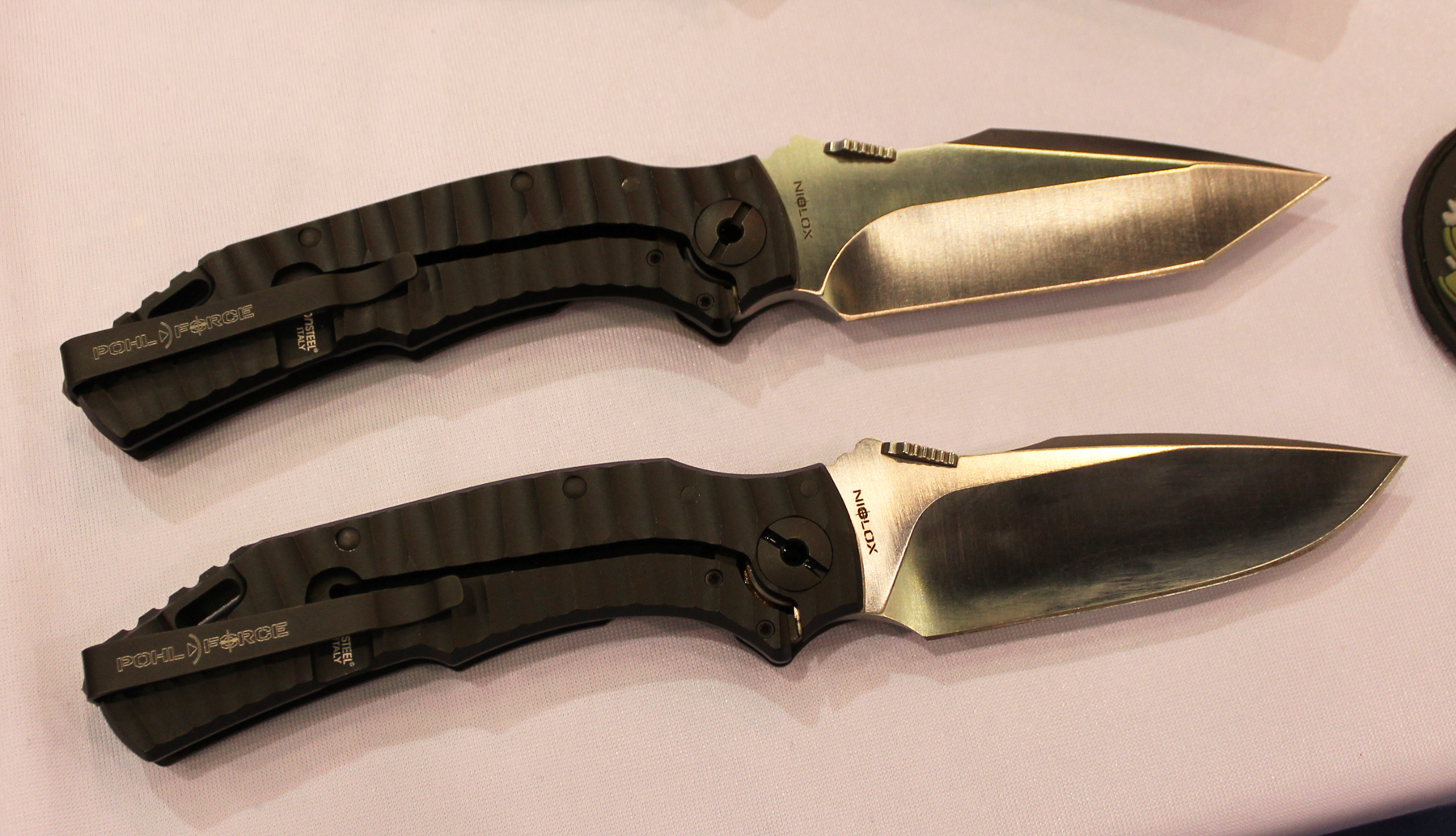 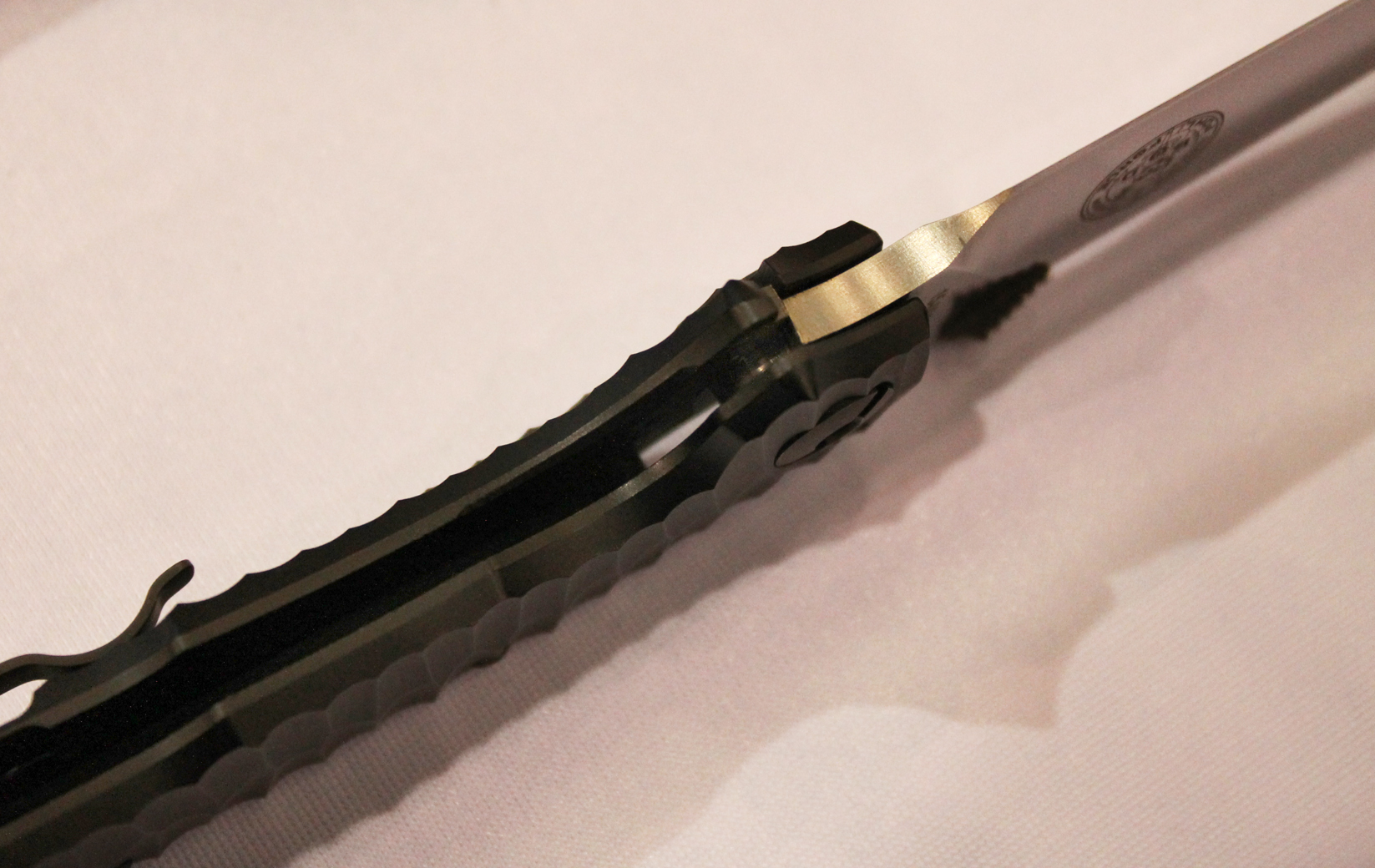 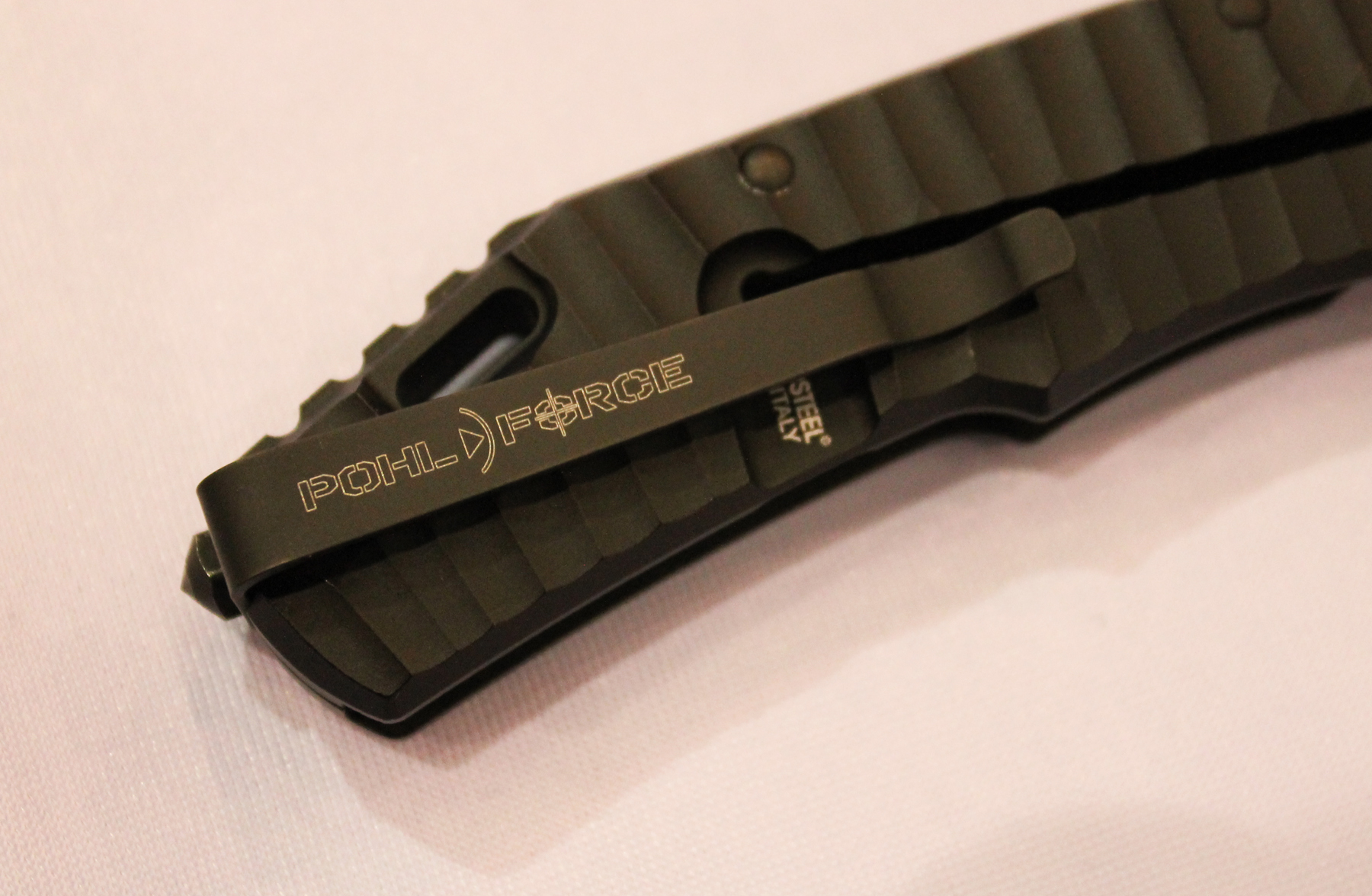 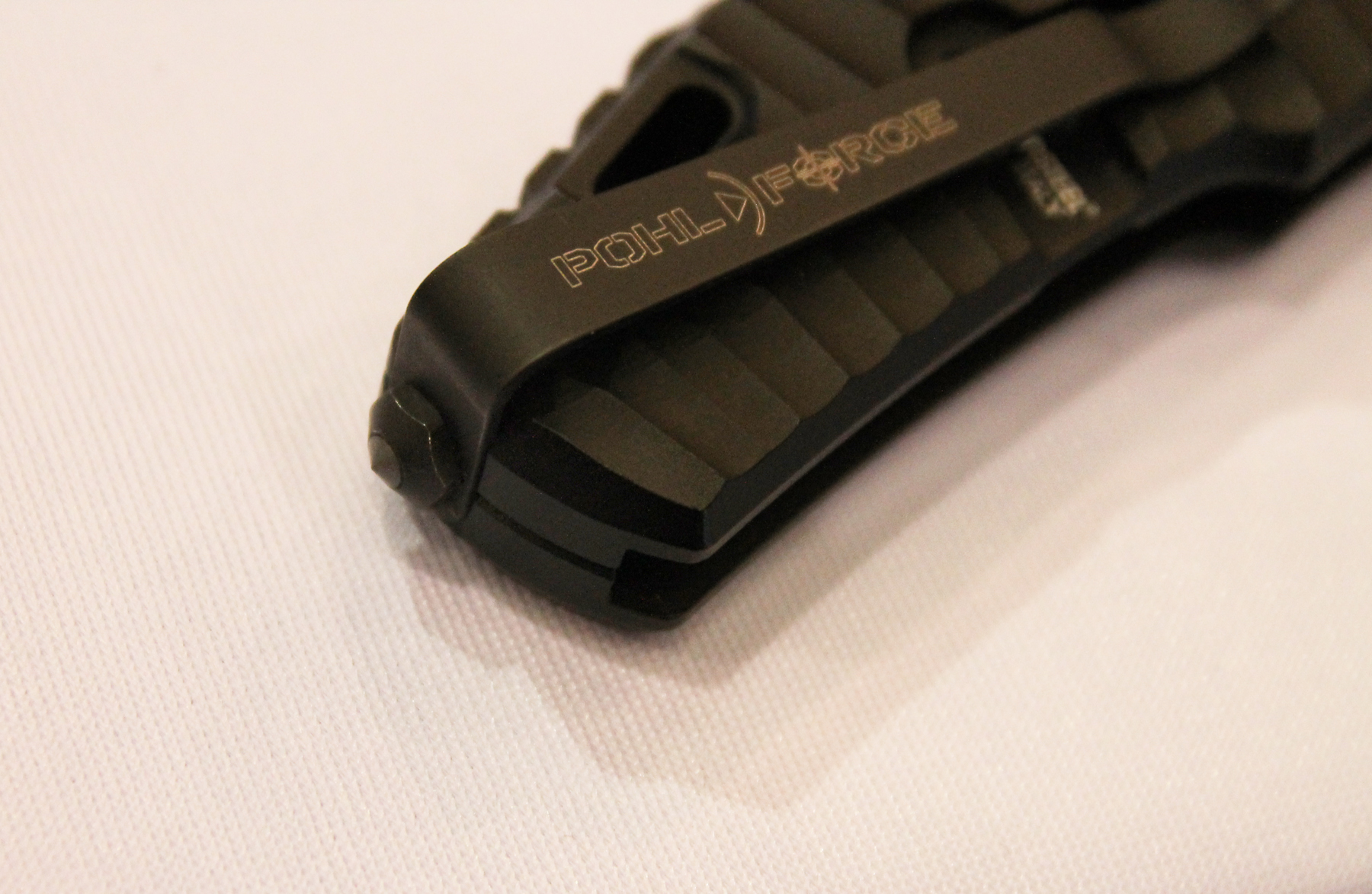 With the new Mike Three and Four Outdoor Series Pohl Force fulfills the wishes of many customers offering the perfect all around knife for every day carry (EDC).  This knife can be optimally utilized for outdoor use, as well as professional applications.  The handle scales are manufactured using a ‘hard coat’ anodized aluminum which gives the necessary robustness and user friendly surface.  Precisely machined to tight tolerances the bolted steel inserts ensure a safe and wear-free operation of the Frame Lock locking system.  The 4 mm / 0.157 inch thick blade from Niolox steel comes with a fine satin finish, and gives the knife an easy to maintain surface.  In addition to the well-known Mike Spearpoint blade shape, the Mike Four Outdoor is now available with a Tanto blade.  The clip system has also been completely re-designed, the clip on the Mike Three and Four Outdoor Series is now offered with a solid stainless steel clip and an integrated glass breaker, screwed to the end of the handle.  With the new tungsten carbide glass breaker, breaking glass now finally possible with the Mike series knives.  A ParaCord lanyard with decorative metal skull assists the drawing of the knife from the holster or pocket.  The product package contains the high quality EOD Collectors Pouch, and also the new 3D Pohl Force patch. 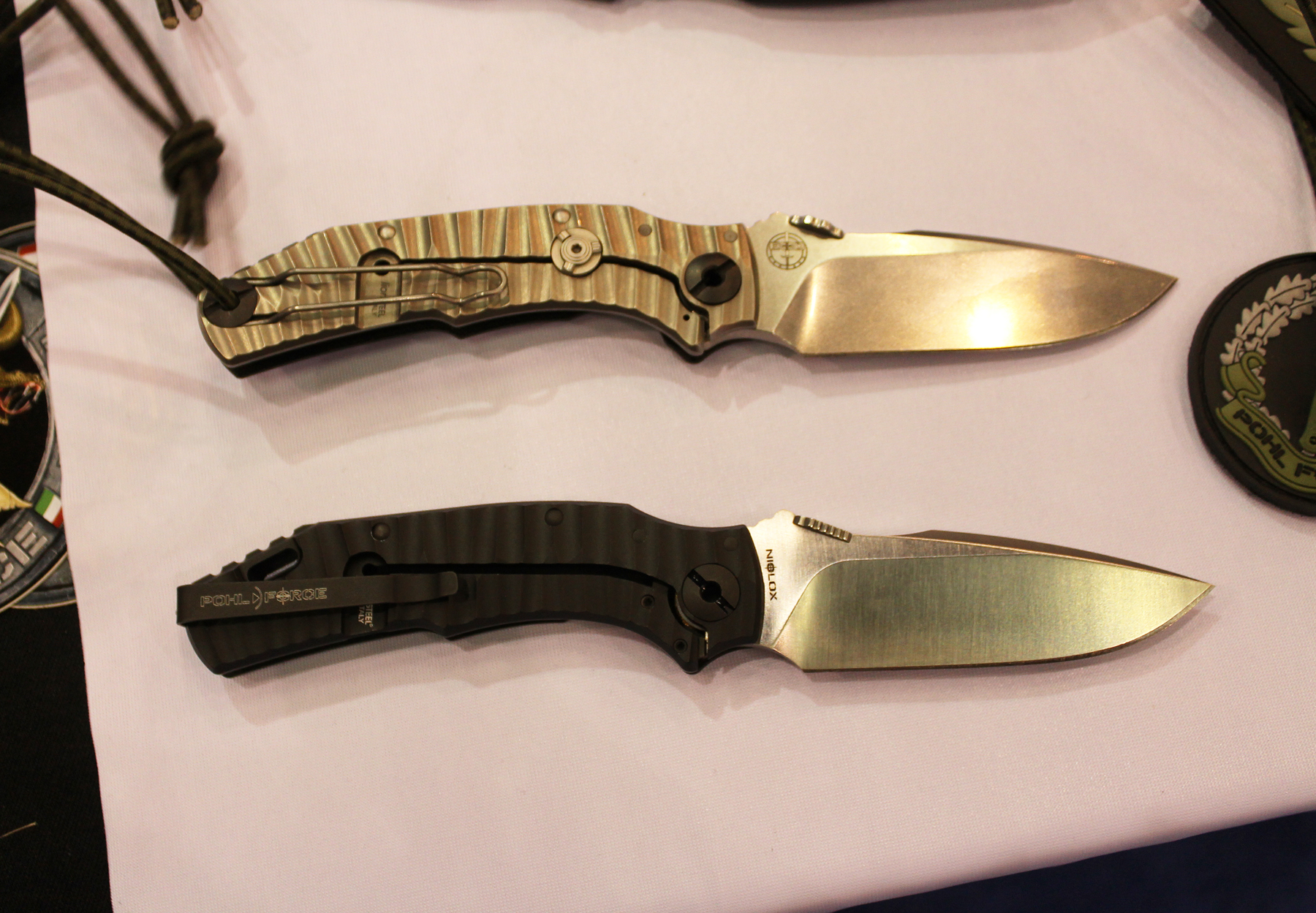 Phil and Sylvia from Pohl Force USA were gracious enough to spend time with me at their booth, explaining the virtues of the latest Mikes.  The Three and Four will ship in a few weeks.  Phil said the MSRP for the new Mike Three or Four, including a skull-topped lanyard and Pohl patches, will be $275.00.  That is around a hundred dollars less than the Mike One or Two.  In today’s marketplace, it is a great price for a folding knife of this elevated pedigree.

This entry was posted in Knives, Off Duty, Street, SWAT and tagged Blade Show, Pohl Force Knives. Bookmark the permalink.