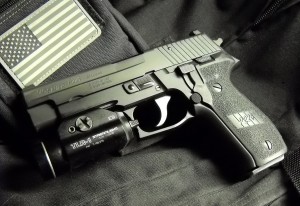 (Ed. Note:  Aaron is a sworn LEO and SWAT cop in another state.  He frequently comments here at TBF and is an editor at BlueSheepdog.com.  The following was originally sent as a comment to my article Long Range Police Marksmanship, but I felt it should stand alone as a post.  Welcome Aaron!)

The mindset that the pistol cannot be used beyond 25 yards permeates the law enforcement community, and is a dangerous and ignorant concept.  It is true that a pistol is often not as easy to maintain accuracy at longer shots because of the lack of a solid supporting position, but it doesn’t mean that they cannot be effective, as your two fine examples clearly show.

Here is another classic example from my personal experience:  My multi-agency drug task force investigated an anonymous tip about a large meth lab, and wanted fugitive.  There was no history to this residence and only limited information on a possible suspect, so we conducted a knock-and-talk.  Nobody answered and it was believed nobody was home.  Two detectives went for a search warrant based upon stolen vehicles located around the house.

The suspect, who had remained hidden and quiet inside his locked house for nearly two hours, attempted to escape outside the back door not knowing that detectives were about 30 yards away.  With the suspect shooting a 9mm Glock with 33-round magazine, the exchange of gunfire was fast and furious.  Having prepared for just this occasion, the suspect jumped back inside the back door, and triggered the firing mechanism on the stolen claymore mine that was aimed at his meth lab.

This was a major lab taking up an entire 2-car garage, complete with a 72L flask and 55-gallon drums of chemicals.  The resultant explosion blew him out into the backyard in what my partner described as a “cheetah flip” and instantaneously engulfed the garage in large flames.  After more gunfire, the suspect fled into a field where he had staged a Jeep Wrangler.  We had checked this vehicle finding two flat tires, dry rot on the seats, leaves and debris in the interior, and no doors.

As the suspect fled, two detectives continued to engage the suspect with pistol fire.  One was firing a Glock 22 (.40) and the other a 1911 (.45).  From their final firing position to the Jeep it was around 125 yards.  One knelt, and one remained standing.  Each took time to aim and squeeze off shots in a slower and methodical approach than the closer initial shootout.

Of course the Jeep fired right up.  The suspect used pre-cut paths through a forested area to temporarily escape before crashing shortly after coming out of the woods and being immediately pursued by responding officers.

Learn the fundamentals, and you can make good shots at distance with a pistol.