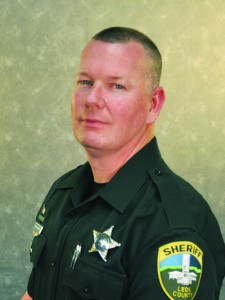 As the greater Tallahassee community healed after Thursday’s FSU school shooting, more tragedy struck.  Leon County Sheriff’s Deputy Christopher L. Smith, responding to a house fire, was ambushed and murdered as he arrived at the scene Saturday.  The suspect, Curtis Wade Holley, took the deputy’s gun and began firing it as he walked down the 3700 block of Caracas Court.  Deputy Colin Wulfekuhl was shot and wounded by the suspect.

Tallahassee Police Department Officers Mark Lewis and Scott Angulo came on scene.  Ofc. Lewis tried to help Dep. Smith, but was fired upon by Holley.  Tallahassee Fire Department personnel were also shot at and least one fire engine was seen racing backward down the street.  Dep. Wulfekuhl continued to engage the shooter even though he had been hit in his bullet resistant vest.  Holley was subsequently killed by Ofc. Angulo.

Holley apparently harbored anti-government opinions and sought to ambush and kill as many first responders as he could.  The house fire was set with the intent to draw in his targets.

“These first responders performed their duty bravely, with courage and with honor.  They are the reason that this casualty count is not higher than what it is,” said LCSO Lt. James McQuaig.  The officers and deputies were credited with saving the lives of the firefighters and innocent citizens.

Dep. Smith, 47, is survived by a wife and two children.  He had been an LCSO patrol deputy since 2009.  Funeral arrangements will be announced by the Leon County Sheriff’s Office.