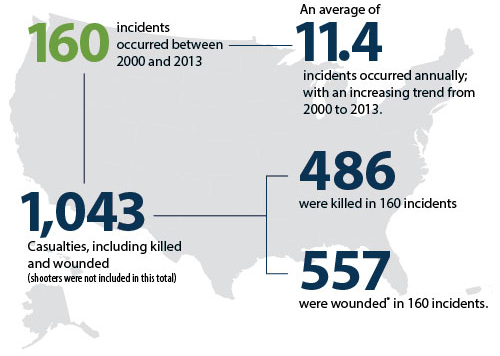 The FBI published its 2014 Active Shooter Incidents Report this week.  It collated information from a total of 160 ASI’s from the years 2000 through 2013.  In the introduction, it noted that the selection of ASI’s can be subjective and that the aggregate seeks to add “clarity and data of value” for a basic assessment.  The 2014 report adds 33 incidents, as well as 17 from 2013, to the prior bulletin from January of this year.

Some of the highest casualty incidents include:

I commented on the results of the FBI’s previous January 2014 bulletin as it related to law enforcement response and recommendations–patrol rifles, plate carriers, and medical equipment for all cops.  With just one extra year of data, my observations will highlight some of the other trends. 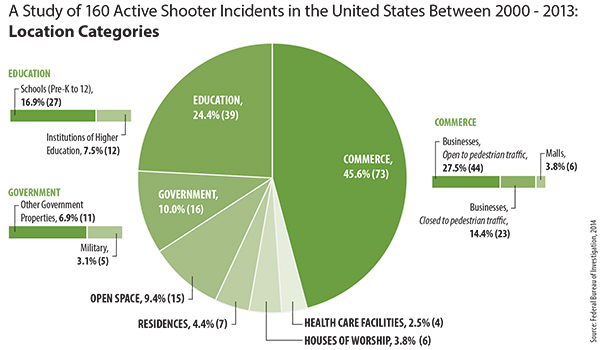 First of all, there was a 20% decline in ASI’s for 2013 (17) when compared to 2012 (21). Along with the reduction in the number of incidents, there was a 51% decrease in the average number of killed and wounded casualties; five per incident verses 9.9.  The decrease did not count the shooters themselves.  It appears that we got lucky in 2013.

This new study examined 64 incidents where the durations could be ascertained.  In 44 (69%) of the 64, the active shooter events ended in five minutes or less.  Twenty-two of the 44 ended in two minutes or less.  Because of the speed of the incidents, 66.9% of all 160 ASI’s had ended by the time police arrived.

The above stats prompted the study’s recommendation for awareness, training, and exercises for not only law enforcement, but civilians as well.  “It is important, too, that training and exercises include not only an understanding of the threats faced but also the risks and options available in active shooter incidents.”

To quote findings, “The study identified 21 (13.1%) of 160 incidents where unarmed citizens made the selfless and deeply personal choices to face the danger of an active shooter.  In those instances, the citizens safely and successfully disrupted the shootings. In 11 of those 21 incidents, unarmed principals, teachers, other school staff and students confronted the shooters to end the threat.  In 10 incidents, citizens, working or shopping when the shootings began, successfully restrained shooters until police could arrive.  And in 6 other incidents, armed off-duty police officers, citizens, and security guards risked their lives to successfully end the threat.  These actions likely saved the lives of students and others present.”

The FBI Active Shooter Incident Report is a 47 page PDF document that is worthwhile reading for any citizen, cop or not.  Arm yourself with knowledge.

This entry was posted in Media, Misc., Officer Safety. Bookmark the permalink.