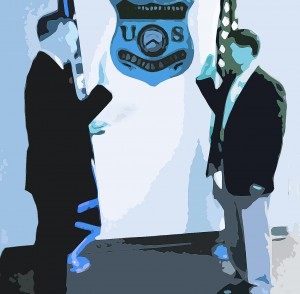 I spent the morning of September 11 this year being sworn-in to a federal task force, which I will not name here.  As I talked to the ASAC and a supervisory agent who were completing the documentation, we compared experiences from 9/11/2001.  None of us was involved in the infamous events of that day, but all of us were in service to our communities and country at the time of the attacks 13 years ago.

Today’s law enforcement efforts are more collaborative than in decades past.  Federal agencies are spread thin for personnel, due to their increasing duties, and can use the assistance of police officers and deputies as supplemental staffing.  In turn, local departments benefit from wider sources of intel and info, better training, and, sometimes, upgrades in equipment through federal funding or forfeiture monies.

Though my particular task force duties will be as-needed and part time, I am pleased to be able to help our G-Men colleagues.  Although I am not credentialed in other areas, I assist by supervising a task force officer for another alphabet agency and am liaison to yet a third working group run by the Feds.

Partnerships between federal agencies and local police departments have been on the rise since 9/11.  In my opinion, this is directly related to the tremendous and complicated burden of protecting our country against terrorists.  In addition, the interdiction of criminals involved in drug trafficking, human trafficking, child exploitation, and organized fraud has also contributed to a need for all law enforcement entities to circle the wagons.

I found it fitting that one of my detectives and I raised our right hands and swore an oath to protect and serve on this September 11.  At a luncheon hosted later by a civic group to honor first responders, I felt proud and humbled to be one member of a large group of firefighters and police officers in attendance.  9/11 is still an emotional day symbolizing service.

This entry was posted in Misc.. Bookmark the permalink.