Militarization of the Police–A Cop’s View

I get a little miffed at the argument that the police are becoming “too militarized.”  Detractors say that law enforcement has no need for the equipment that the U.S. Government has been distributing from its arsenal of aged or obsolete equipment.  This controversial military equipment comes mainly in two flavors:  weaponry or protection.

As to weaponry, we are talking rifles.  My agency just took possession of two dozen older Colt M-16s from the Department of Defense at a very low price per unit.  Before the naysayers get in an uproar, understand that we already have more authorized fully automatic rifles for our SWAT team.  Our street officers also field semi-automatic civilian model AR-15’s.

This is representative of most police departments and sheriff’s offices around the nation.  Rifles have been recognized as a more appropriate weapon for modern police officers than the traditional shotgun to counter today’s violent offenders.

Back in February of this year, I published the results of an FBI study into Active Shooter Events from 2000-2012.  The recommendation by the FBI was that, “Officers ought to have firepower at least equivalent to what they will face if they go in harm’s way.”  The study urged that today’s police officers should have access to patrol rifles and protective armor.

The American Civil Liberties Union says the DoD lets police agencies have “grenade launchers.”  Actually, they are old M79 40mm launchers that the cops can only use for less lethal gas and distraction munitions.  Police cannot even acquire deadly anti-personnel rounds for them.  “Grenade launcher” is intentionally used for its inflammatory connotations.

The Department of Defense, under the National Defense Authorization Act of 1997, 1033 Program, is not giving police departments hand grenades, anti-tank rockets, crew-served heavy machine guns, or phased plasma rifles in the 40 watt range.  They are handing out only the rifles and launchers that local law enforcement already have in their inventories–and have had since the 1970’s.

Oh, yeah, some misinformed pundit opined the police are not trained to use said equipment.  Well, that was written in ignorance of the many hours of mandatory training required before a deputy or officer is allowed to carry a rifle or gas launcher on the street.  Let us also not lose sight of the fact that citizen leaders must authorize the purchase of the equipment in the first place.  They can be a bit liability conscious.  (Sarcasm intended.) 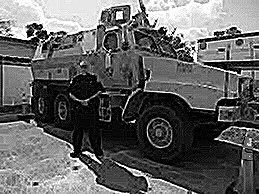 As to Government-issued protective equipment, the incensed critics point to MRAPs.  The mine-resistant, ambush-protected vehicles are used by law enforcement for the safety of citizens and officers.  Police departments are purchasing surplus MRAPs for about $2,000.  With civilian contract armored vehicles starting in the $150,000 neighborhood, you can see why there is a waiting list for the MRAPs.

Again, the Government is only “giving away” armored protection that local law enforcement agencies have already used for decades.  Sure, the MRAPs and smaller Peacekeepers are not ideal for police use, but as the informal motto of my SWAT team goes, “It’s Better than Nothing.”

Folks, law enforcement could go back to revolvers and shotguns if the criminals and mentally unstable were themselves “demilitarized.”  The police must face a growing number of individuals on the street armed with military-style weapons and explosives, whether they be active shooters, drug dealers, gang members, or terrorists (think Boston).  Officers deaths by firearms thus far in 2014 are up by 61% over last year.  It is no wonder we are looking for protection.

Of course, I do not condone the misuses of our weapons, tactics, or training.  I also do not think that every cop shop in every jurisdiction needs all the equipment the Government has made available.  The procurement of any civilian LE gear is made with the approval of elected and appointed civilian officials, who determine a community’s needs.  In fact, earlier this year the U.S. Congress voted down an amendment to repeal the DoD distribution of equipment to law enforcement (NDAA of 1997) by an overwhelming vote of 355 nay, 62 yay.

I read where ACLU member Kara Dansky said that, “If you have a hammer, everything looks like a nail,” she said.  “When the police have these weapons, they’re more likely to use them.”  The very same could be said for the criminals.  To use another overly simplistic saying, my view is that the police are only trying to use “the right tool for the right job.”

This entry was posted in Media, Politics, Street, SWAT. Bookmark the permalink.

8 Responses to Militarization of the Police–A Cop’s View