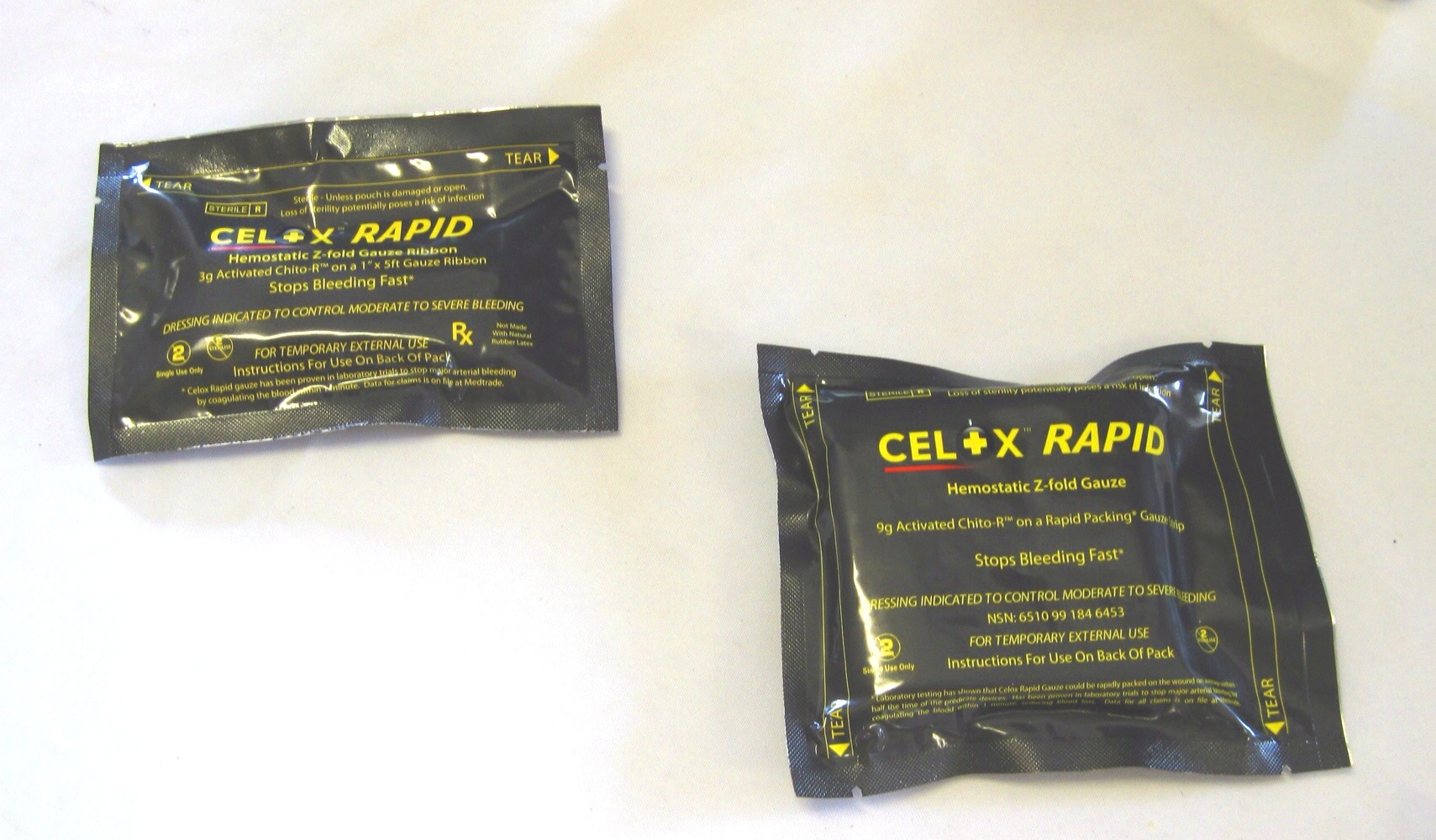 As I was finishing a half lap of SWAT Round-Up International’s vendor area, I had spied my old friend, an Orange County Sheriff’s Office Master Deputy.  My friend introduced me to Dr. William Brooks at the Advanced Trauma Specialties display.  Dr. Brooks was demonstrating some new Celox RAPID hemostatic gauzes.  The Celox RAPID gauzes come in Z-folded 3″ X 5′ and 1″ X 5′ lengths, the latter of which is called Celox RAPID Ribbon gauze.

Celox granules are laminated to the high density gauze material to provide easy packing into a wound for quick bleeding control.  Celox is made with Chito-R™ (chitosan from shrimp shells) that binds to red blood cells to seal severe wounds caused by gunshot, stabs, or blast fragmentation.  Allergic to shellfish?  No problem, it is not reactive.

Dr. Brooks showed me a graphic video of Celox RAPID staunching a femoral artery bleed in an animal test subject.  It was from a Navy study in which Celox outperformed Combat Gauze and ChitoGauze in patient survivability.  What I saw certainly reinforced   RAPID’s capabilities.  Celox RAPID can be separated into smaller portions for mass casualty situations and can also be easily debrided from a wound through irrigation, added Brooks.

Dr. Brooks told me that the Celox could be used to stop high pressure arterial bleeding close to or in the torso where tourniquets could not be applied.  Again, he demonstrated with a still photo of a grievous wound (this time in a human MVA victim) that was successfully closed with this product.  The patient survived.  Okay, Doc, you can give the phone a rest.  Celox’s original granulated version’s effectiveness had been in question because of the delivery method.  Their new gauze seems infinitely more practical for the first responder. 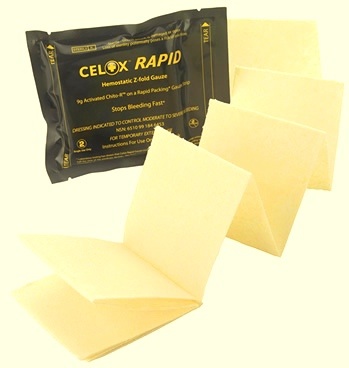 My friend, who has been a longtime high liability training officer at OCSO, said his agency has begun issuing Celox RAPID to their road deputies for carry behind the trauma plates in the pockets of their body armor.  He said that after much review and testing, they felt that the deputies could do the most good packing a severe puncture or bullet wound with the Celox RAPID gauze and applying direct pressure.  I thought this was an excellent recommendation.  I will be adding a Celox RAPID 3″ X 5′ pouch to my throw-over vest.

This entry was posted in Medical, Officer Safety, Street, Technology. Bookmark the permalink.