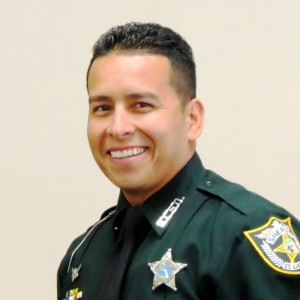 According to SLCSO, the suspect is in custody and is charged with first-degree premeditated murder, assault on an officer/firefighter/EMT, fleeing and eluding and possession of a weapon or ammunition by a felon.

Sgt. Morales was a former U.S. Air Force K9 handler.  A 13 year veteran of the SLCSO, he had served as an SRO, SWAT Sniper Team Leader, and Special Investigations detective.

Sgt. Morales leaves behind a wife and two young daughters.  A public viewing is scheduled for Monday March 4 at 10:00 at the Westside Baptist Church, 3361 South Jenkins Road in Fort Pierce.

Sgt. Morales is the first police officer to be killed in the line of duty this year in Florida.  Our condolences go out to his family and the SLCSO.

The following information was forwarded to me from Barbara Snow at the US War Dogs Assoc., Southern Chapter.

Donations
Anyone wishing to make donations to the Morales family may make checks to
“The 100 Club of St. Lucie County, Florida”
Please designate the donation is for the Morales Family.
100% of the donation goes directly to the family.