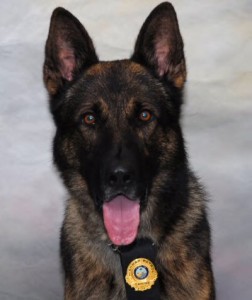 After a consult between Dr. Simmons, Trooper Boody, and UF veterinary surgeons, it was decided to put K9 Drake down to end his suffering. K9 Drake was euthanized at 6:14 Friday.

Trooper Boody was not at home Sunday when three suspects shot K9 Drake through a sliding glass door as the dog tried to defend the home. After entering the residence, at least one suspect shot Drake again. Boody arrived home later, discovered his wounded canine, and rushed him to an emergency clinic.

One juvenile suspect was apprehended because of his GPS-equipped ankle monitor. The 16 year old was on probation for Burglary and Grand Theft. He is now charged with Armed Burglary and Felony Cruelty to Animals. Palm Beach County Sheriff’s Office is searching for two other suspects.

The arrested juvenile showed no remorse for shooting K9 Drake. The trio had targeted the trooper’s residence because they thought they would find guns and money there.

Trooper Boody was thankful for the community’s support. Over $15,000 was collected for K9 Drake’s care. Dr. Simmons flew Boody and Drake to Gainesville in his personal aircraft. Donations were still being accepted at the Simmons Veterinary Hospital (561-439-3220).

Funeral services for K9 Drake have not yet been announced.

I couldn’t feel more sadness for Trooper Boody or more anger toward the cowardly suspects.