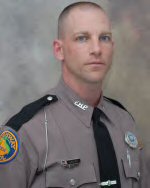 Florida Highway Patrol Trooper John Costa was sentenced to five days in jail and a $500.00 fine for contempt of court for failing to appear for a DUI trial in Volusia County on October 30.  Friday, Judge Belle Schumann made the contempt finding after Trooper Costa, who was aware of his subpoena, did not appear in court and would not answer phone calls or contacts at his front door by court liasons.

According to Judge Schumann, “The essential facts constituting the criminal contempt charged are that Trooper Costa was a critical state witness in this case, under valid subpoena for trial, with actual and constructive knowledge that the trial was supposed to take place on Tuesday, October 30th, 2012, and yet willfully refused to comply with the subpoena.”

Trooper Costa arrested Stephanie Halcomb on December 3, 2011 for DUI.  After being stopped for driving over 90 mph on I-4, Halcomb failed field sobriety tests and registered a blood alcohol level of 0.192.  It was her second DUI in two years.

An FHP official stated that Costa, assigned to Troop D, has notified them that he will resign.  The FHP had not yet determined discipline in the case.  FHP says that while troopers have been fired or disciplined for court FTA’s, this is the first time one has been sent to jail for it.  Trooper Costa’s only prior discipline in his five years of service was for a minor cruiser crash with a pole.

I know we all have personal lives and occasionally encounter conflicts with court dates, but our presence is a necessary part of our jobs and of the system.  I am curious to know if there were extenuating circumstances that played into his snub of the subpoena, since we all know the potential consequences of not showing up.  As to the sentence, I think it is a sign the judge was either frustrated or sending a message or both.