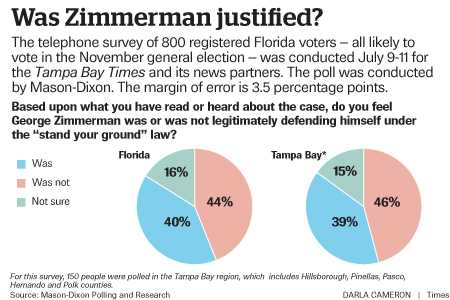 Mason-Dixon Polling and Research, Inc. conducted a telephone poll of 800 register voters across Florida from July 9, 2012 through July 11, 2012.  One of the questions involved Florida’s Stand Your Ground law.  Overwhelmingly, the voters polled supported Stand Your Ground.  It is interesting to see how the support and opposition are divided by gender, race, and region in the percentages.  Below are the results from Mason-Dixon:

Question:  Florida’s “Stand Your Ground” law states that a person is justified in the use of deadly force to defend themselves if they reasonably believe that such force is necessary to prevent imminent death, great bodily harm, or to prevent the commission of a forcible felony.  A citizen has no duty to retreat and if it is determined that their use of force was justified they are immune from criminal prosecution and civil action.

The “Stand Your Ground” law does not apply if the victim initially provokes the use of force or if they are involved in a felony crime.

Do you support or oppose keeping Florida’s “Stand Your Ground” law as it is currently written?

(If “OPPOSED” or “NOT SURE”)  Do you feel Florida’s “Stand Your Ground” law should be modified to permit its use in fewer situations, or do you feel the law should be repealed in its entirety?

However, in the case of George Zimmerman, the results were somewhat different.

QUESTION: Recently in Sanford, Florida, Trayvon Martin was killed by
George Zimmerman in a situation where the two were involved in a
physical struggle.  Zimmerman claims he was defending himself from
imminent physical harm or death under the state’s “Stand Your Ground”
law, while a special state prosecutor disagrees and has charged
Zimmerman with second-degree murder.

Based upon what you have read or heard about the case, do you feel
Zimmerman was or was not legitimately defending himself under the
“Stand Your Ground” law?

In the question of George Zimmerman, the strongest polarizations were between race and party affiliation.  It must be remembered that the voters polled answered this question based upon what they know from media reports and press releases.

Of interest to me was the fact that the Tampa Bay Times, one of the newspapers commissioning the poll ran the incorrect graphic above about the Zimmerman case in their paper.  Despite citizen comments made almost immediately, it was not changed.  Fair reporting?

Mason-Dixon reports the margin of error to be 3.5% for this poll.  The poll was conducted for the Miami Herald, Tampa Bay Times, and BayNews9 media organizations.