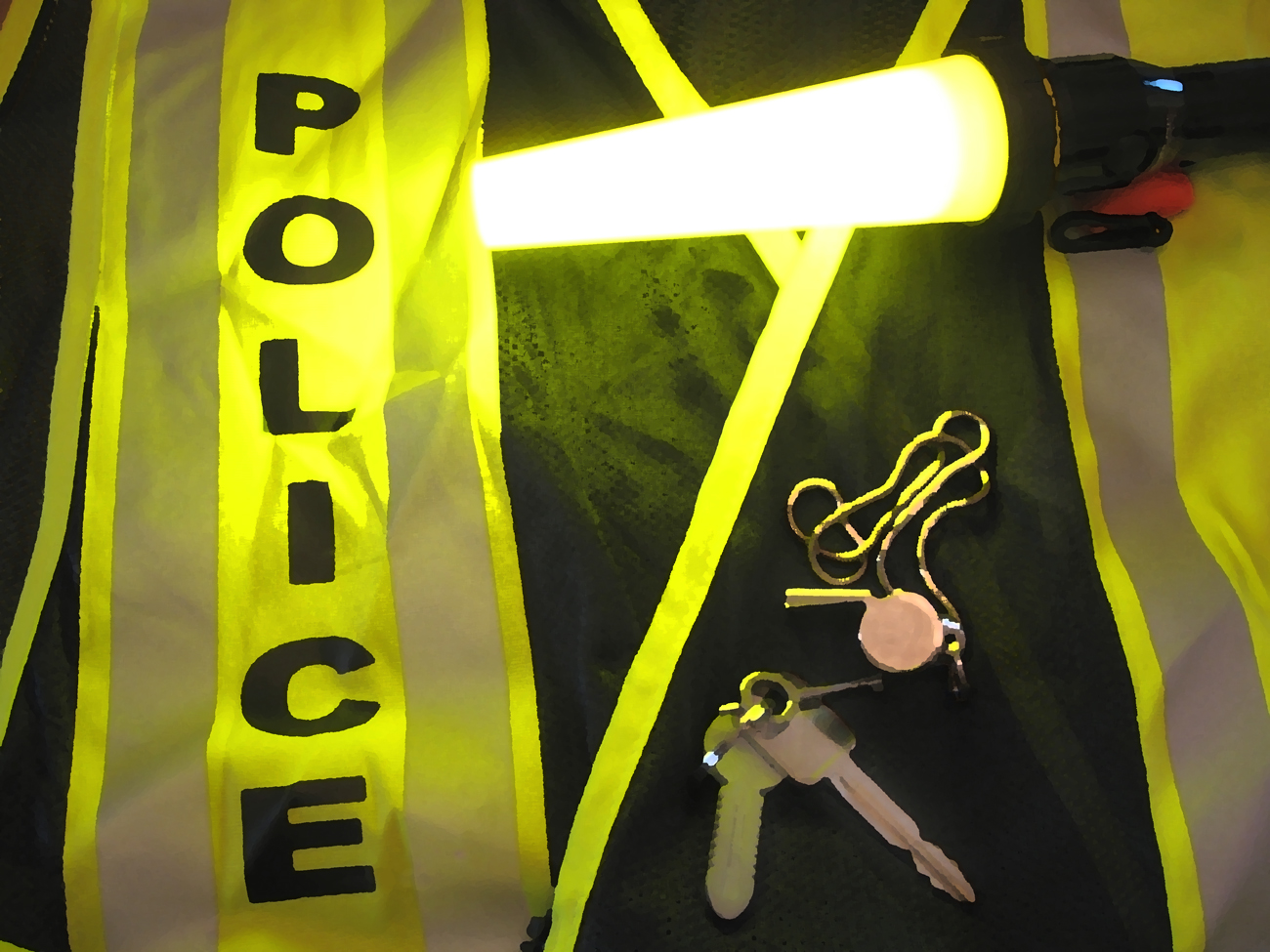 I was at a serious DUI traffic crash the other night.  All of the eastbound lanes of a six-lane state road were impassable.  I was assisting a new officer in maneuvering traffic in a U-turn away from the scene.

The rookie did not have a traffic cone for his small tactical flashlight, nor did he have a whistle on him.  He was obviously not well skilled in traffic direction yet, so I kept an eye on him.  I loaned him my Streamlight Stinger and yellow cone.  I went to my cruiser for a sec to check the computer status screen and see if any priority calls were holding.

That’s when it happened.  The rook’s ambiguous flashlight motions confused a driver.  I looked up in time to see a mini-van move through the median break, pass the officer, and accelerate eastbound into westbound traffic!  The rookie looked at me in shock and shouted, “Uh, can you get that?”  Holy sh*t.

I slammed the car door and flipped on every light my cruiser owned.  Siren wailing on high-low, I floored the CVPI into the wrong lanes, chasing after the wayward driver.  There were no westbound cars for about a quarter mile, but that traffic just got a green light and was headed our way.

Still confused, the driver did not stop as I flew up behind.  I believe he thought I was pulling up to the original crash scene, which was now abreast of us.  The van was in the median lane, so I kept on the gas and swung around him using the center lane.  Aaand, I’m seeing headlights closing!  I only had seconds.

As I roared by, I glanced at the van.  It was surreal.  Dad, mom, the kids, and probably the family dog jauntily motoring along where the nice officer had told them to go.  Just as the ass-end of my Slicktop passed the front of the van, I cut in front of them and slowly applied brakes to bring them to a stop.

The family looked a little stunned as the first of the oncoming cars zipped by.  With an apology, I got them safely into the traffic flow.  Then, I returned to the scene of the mistake to give the rookie a sobering critique and the basic tips.

First and foremost:  Always wear your reflective vest!  Regardless if it is night or day.  The darn thing is ANSI compliant for visibility and you are not.

Second, know clear hand signals.  Hard to recreate here, but hand signals in daylight are much different than using that flashlight and cone in the darkness.  Simple movements to direct the cars are best.  Waving them forward, pointing toward turns, and holding out a hand or light for stop work best.

Next, you need your whistle.  One long blow for stop.  Two short chirps for go.  This auditory addition to good hand signals is essential if you want to get their attention.  And you do.

Make eye contact with drivers when possible.  There is no clearer way to judge their intent than with seeing that they see you.  Non-verbal cues can save your life.  You can also watch the vehicle’s front tires.  They are directional indicators.

Take a good position.  When performing traffic control in a large intersection with turn lanes, stand in the debris field in the center of the intersection.  That is where the cars don’t drive when traveling straight through or turning.  Make this your happy place.

Do not stand behind your fully lit cruiser and wave a flashlight around in the dark.  With a light bar, strobes, and standard illumination, your squad looks like a UFO.  The drivers will not see you and your Maglite making Fourth of July sparkler motions out there.

If a driver is not following your instruction, do not aggressively walk toward them or try to physically block their path.  They will undoubtedly win this game of chicken and you will just end up as a two dimensional shape in some traffic crash diagram.  Continue your attempts at communication from your happy place.

DO NOT TRUST THE DRIVING PUBLIC.  They are unpredictable and can be easily confused by the chaos of an accident scene or emergency.  This is especially true at night.

Two officers work better in a multilane intersection, if they are communicating well.  One should be the primary and call the shots.  This will minimize conflicting directions, which ultimately lead to paperwork.

Watch those larger vehicles.  They take up more space in the roadway.  I have literally had the side view mirror of a big truck brush my hair as it passed too closely.  Yeow!

Traffic control is one of our more dangerous daily jobs because we are virtually unprotected.  Keep your head on a swivel, be paranoid, and use common sense.  We have to take it seriously, as lives are at risk.